According to this piece authored by R. G. Ratcliffe in the Texas Monthly, here's what's happening in Texas right now within the Republican Party: "a loose coalition of educators, business people and moderate Republicans are attempting to challenge this Empire—mostly Patrick—in the Republican primaries."

And the Empire headed by Gov. Abbott strikes back...  Read on. 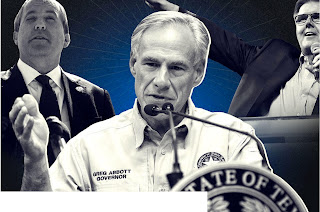 By
R.G. Ratcliffe
Date
Feb 9, 2018
Abbott and Patrick are bringing the power of incumbency to bear against a Rebellion of educators, business leaders and moderate Republicans.

The battle for Republican power in Texas is taking a familiar story line as the primary elections draw near. Think of the religious fundamentalists and no-tax tea partiers as the Empire in control of a state government, helmed by Governor Greg Abbott and Lieutenant Governor Dan Patrick, and advised by Attorney General Ken Paxton. But recently, a Rebellion formed, and a loose coalition of educators, business people and moderate Republicans are attempting to challenge this Empire—mostly Patrick—in the Republican primaries.

Now, it is a dark time for the Rebellion. Although the Bathroom Bill was destroyed last year, voting in the primaries begins February 20. Fueled by a Death Star of money, the Empire is striking back.
One group in the Rebellion has been the Texas Association of Business, which played a key role in defeating legislation to limit public bathroom access to the gender listed on a person’s birth certificate. The bill was a swipe at transgender people, and business leaders across Texas worried that such discrimination would dissuade corporations and their employees from relocating to Texas. Patrick pushed the bathroom bill, and Abbott added it to the agenda of a special session. Both were thwarted.

During a speech at a Texas Public Policy Foundation gathering on Thursday, Patrick lashed out at the Texas Association of Business. Without specifically naming the group, he said, “Just because a business group has a business title in front of it doesn’t necessarily mean they were being run by conservative Republicans.”

Patrick also sniped at moderate Republicans who are pushing primary voters to elect “responsible Republicans.” He said a responsible Republican is a conservative Republican. “When I hear people today who criticize the conservatives who led this state for the last fifteen years, it’s one thing when they’re on the other side, but sometimes when it comes from our own team, I don’t understand,” he said. “I don’t want the state to be in the hands of moderates, liberals, progressives, because if it is, we’ll be California and the country will be in trouble.”

Along with the saber-rattling, Patrick is spending money like a man who is worried about the Rebellion. Patrick is facing a primary opponent, Rockwall city council member Scott Milder, who in any other set of circumstances would be considered an also-ran. But the education community has rallied behind Milder as a supporter of public education and an opponent of private school vouchers. Patrick is countering by spending $5 million on television advertising when Milder has just $40,000 in the bank.

Meanwhile, Abbott has tossed aside Ronald Reagan’s 11th Commandment to never speak ill of another Republican. Abbott so far has endorsed challengers to incumbent Republican House members Sarah Davis of Houston, Lyle Larson of San Antonio, and Wayne Faircloth of Galveston. Abbott promised last year to work against any legislator who thwarted his agenda, and his endorsements are making good on that promise. Susanna Dokupil, who has Abbott’s endorsement in her race against Davis, worked as an assistant solicitor general for Abbott when he was state attorney general. Abbott is spending $161,000 on television commercials against Davis and on behalf of Dokupil.

And in an apparent attempt to suppress the vote of educators through intimidation, Paul Bettencourt, a state senator and Patrick ally, asked Paxton to rule that school district spending to bolster voter turnout was a violation of state law and the state Constitution. Paxton, in a non-binding opinion, wrote that using school buses to shuttle people to polling places, unless there was an educational purpose, would likely violate the law because it would serve “no public purpose.”

Empower Texans is using Paxton’s ruling in a letter sent out statewide to school district employees, seeking “whistleblowers” to report districts, principals or teachers who use public resources to help anyone vote. “Some school districts across the State of Texas are vowing to illegally misuse school district recourses [sic] to electioneer for liberal candidates in upcoming elections,” said the letter by Empower Texans general counsel Tony McDonald.

Educators across Texas are responding to the McDonald letter by creating their own whistle blowing Twitter hashtag: #blowingthewhistle. Former State Board of Education member Thomas Ratliff is among those sharing the hashtag.


In fact, less than half the people who voted Republican for governor that November had cast a ballot in the GOP primary just eight months earlier. In other words, about 1.4 million Texans who felt compelled to vote Republican in the general election did not take part in choosing the Republican nominees.

Small primary turnout creates a disconnect between the 28 million people who live in Texas and the small number of us entrusted with its leadership. Low turnout in primaries gives elected officials an excuse to focus on pleasing a narrow set of voters, interest groups and priorities. In fact, at the end of last year’s legislative session, I lamented the fact that there had been more urgency surrounding so-called bathroom bills (which were not a priority of mine) than fixing our school finance system (which was a priority of mine). But many in the state Capitol felt greater pressure from primary voters to act on misguided bathroom proposals than on the more difficult work of improving the way we fund public education.

Straus is helping to raise money for a political committee called the Associated Republicans of Texas (ART), a group founded in the seventies with the goal of turning the Legislature Republican. But the group always has focused more on fiscal concerns than social issues.

In one of those strange bedfellows of politics, Empower Texans is criticizing one of ART’s leading donors—Houston beer distributor John Nau—for donating $5,000 to the reelection campaigns of both Davis and Faircloth. Nau is Abbott’s campaign treasurer and gave $100,000 to ART. “While Gov. Greg Abbott has taken the extraordinary action of endorsing against liberal Republican incumbent lawmakers in the March 6th primary, his campaign treasurer is working to undermine his efforts behind the scenes,” wrote Empower Texans capitol writer Brandon Waltens.

It also is notable that the Republican Party of Texas executive committee last month voted to censure Straus for blocking Patrick’s bathroom bill from being considered in the House. Straus had said the bill was bad for business and that he did not want to have on his conscience the possible suicide of a teenager having a sexual identity crisis. Because Straus already has announced his plans to retire, the censure measure looked like the party was kicking him on his way out the door. But as Scott Braddock, editor of the political newsletter Quorum Report noted:

Yes, censuring Straus was about more than just a farewell kick by the right wing. It was about freezing Straus to limit the aid he could provide the Rebellion. Think Han Solo frozen in carbonite at the end of The Empire Strikes Back. To be continued….
Posted by Angela Valenzuela at 1:27 PM