What you need to know about Texas Latino voters and nonvoters

I do like this characterization by Texas Monthly journalist Cecilia Ballí of Texas Latino voters as in tune and complex. As I've blogged previously, the short of it in my view is that the democratic party has yet to make significant investment and inroads into South Texas, as well as many other areas of Texas. I also think that we need to have both Ethnic Studies and more Civics Education taught in our schools so that folks can know their history, including the ongoing struggle for the franchise.

What you need to know about Texas Latino voters and nonvoters

Cecilia Ballí and two colleagues spoke to 100 Texas Latinos to better understand what drives civic engagement and whom they prefer as candidates. 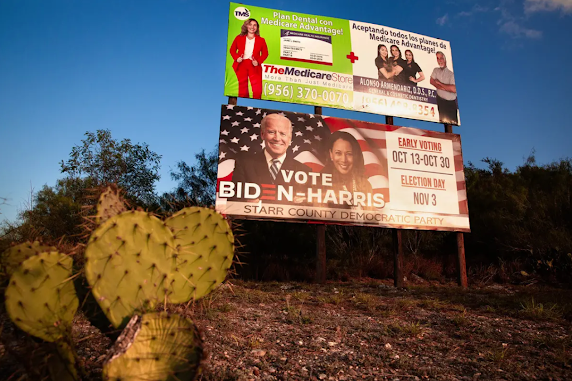 Latinos are highly independent in how they think politically, says Cecilia Ballí, a writer-at-large at Texas Monthly. Credit:Jason Garza for The Texas Tribune

Will Texas Latinos eventually turn the state from Republican red to Democratic blue? The answer to that question is complicated, says Cecilia Ballí, a writer-at-large at Texas Monthly, who covers the borderlands of Texas, security and immigration.

Over the past year, Ballí, along with two colleagues — anthropologist Michael Powell and sociologist Betsabeth Monica Lugo — had one-on-one conversations with 100 Latinos in Houston, San Antonio, Dallas, El Paso and the Rio Grande Valley. Their research, commissioned and funded by the Texas Organizing Project Education Fund, sought to better understand Latino voters and nonvoters in Texas.

Ballí — who wrote about the study for Texas Monthly — talked to The Texas Tribune on Instagram Live about their key findings. The conversation’s highlights are below. You can watch the full conversation here.

Latino voters in Texas have been characterized as a “sleeping giant” that’ll wake up one day and show up at the polls. What has your work taught you about this metaphor? Are Latinos here tuned out of politics?

I never liked the term “sleeping giant” even before this research, because I think it plays on this racist stereotype of the sleeping Mexican — that image we’ve had in popular culture historically.

I didn’t like the connotation that people were just sleeping and that one day they were going to wake up.

Every election, we have this expectation that this is the election when we’ll get a much greater turnout. We have been getting an increasing turnout consistently, especially in the past couple of elections. But it’s never at the rate that we want.

What we discovered is that people are not sleeping, first of all. Almost all of the nonvoters we spoke to were following all of the political news. They could speak to the dramas going on in Washington, D.C. There were other reasons why they weren’t voting.

The nonvoters were not sure that their vote made a difference. They feel other people are the ones who decide these things, in the sense that power resides somewhere else.

What are some of the things that Texas Latino voters said they care about?

By and large, the thing that comes up the most is economy and jobs — like all people, especially working class and middle-class people. They want to be sure they can make a living and improve their lives so their children can be better off. Health care comes up. Education comes up a lot.

Immigration is also an important issue, but it's not the top or single driving issue. I think that's one of the things that the parties get wrong. At a national level, we imagine Latino voters purely as immigrants or children of immigrants. They're seen as one-dimensional voters with one entrance — immigration — and that's the only time Latino voters get engaged. When a political party needs the Latino vote, they put out an immigration policy proposal.That's not the single issue that's driving the behavior of Latino voters singularly. Latinos need to be engaged in a more complex way by the parties and by the campaigns.

How do Texas Latinos side politically?

Latinos are highly independent in how they think politically. We know that they vote on average two Democrats to one Republican. But when you ask them what party they affiliate with, many people don’t affiliate with a party.

They are either actively independent or, more commonly, say, “I don’t have a party,” even if they consistently vote Democrat.

If they consider themselves Democrats or Republicans, a lot would tell us, “but I would be open to another perspective,” or “I don’t want to be too extreme and closed off.”

There are a few explanations. One is that neither party has historically developed an ongoing relationship or dialogue with Latino voters, so there isn’t much partisanship. There isn’t a lot of party loyalty.

Also, many Latinos don’t come from families who’ve been voting across generations, so they haven’t passed on that loyalty.

Latinos also have ideological views that are all along the political spectrum. One person can have a progressive view on one issue and a conservative view on another.

Texas Monthly has been a financial supporter of The Texas Tribune, a nonprofit, nonpartisan news organization that is funded in part by donations from members, foundations and corporate sponsors. Financial supporters play no role in the Tribune's journalism. Find a complete list of them here.

Posted by Angela Valenzuela at 10:35 PM