"It's the Cruelty, Stupid," by Charles M. Blow

After spending several weeks in China, there are so many disheartening and terrible news  to return to.  It indeed felt like a respite to be in another country where Trump and Trumpianism felt so far away—even if these same news received occasional mention on Chinese television.  The usage of "detention" versus "concentration camp" language.  And the true horrors of border deaths, parent-child separations, and ever-more aggressive posturing and policy agendas against the continent's most vulnerable.  All so atrocious.

If the emerging culture of the world has to be put under boot for the established culture to maintain power, so be it. This is the white supremacist mantra; this is the Trump message."

There will indeed be an accounting for this cruelty.  We must all use every means at our disposal to bring this sadistic administration to an end.  Read on.

It's the Cruelty, Stupid

Donald Trump continues to remind us that he does not care about the pain and hardships of racial minorities. 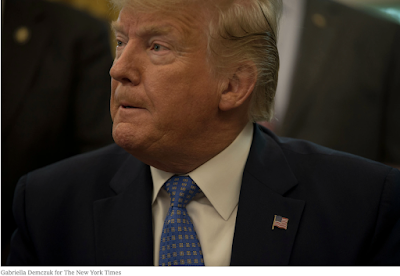 There are tanks in the nation’s capital and concentration camps on its border. The slide of this nation into a nearly unrecognizable state continues unabated. Donald Trump is recreating America in his own image: an abominable one.

He brags about trading valentines with the ruthless North Korean dictator Kim Jong-un, saying at a political rally in September:

According to Human Rights Watch, North Korea under Kim not only “restricts all civil and political liberties, including freedom of expression, assembly, association and religion,” it systematically extracts “forced, unpaid labor from its citizens,” and “women in North Korea suffer a range of sexual and gender-based abuses” that include “rape and other sexual violence and torture in detention facilities, sexual exploitation, or forced marriage of North Korean women in China, and sexual and gender-based violence and discrimination.”

And this says nothing of the hundreds of people Kim is thought to have had executed since coming to power in 2011.
And this is the man that the president of the United States brags about being in love with.

Last month Trump joked with Russia’s Vladimir Putin about getting “rid of journalists.”

According to the Committee to Protect Journalists, 28 journalists have been killed in Russia since Putin took office in 2000.

Last week in Osaka, Japan, Trump said of the Saudi crown prince: “It’s an honor to be with the crown prince of Saudi Arabia, a friend of mine, a man who has really done things in the last five years in terms of opening up Saudi Arabia.”

Let’s be clear: That friend is believed to have ordered the murder of Washington Post columnist Jamal Khashoggi. And, murder may in fact be too antiseptic a word. Turkish officials claim that after Khashoggi was killed, his body was hacked up with a bone saw, then disposed of.

Not only has Trump never delivered a full-throated condemnation of the Saudi leader, he plans to reward the kingdom with more arms sales unless Congress is able to stop him.

Why does the American president have such an affinity, a fetish even, for the world’s dictators while at the same time spurning many of America’s traditional allies? And how does this turn to the darkness reposition this country in the annals of history?

I believe that it speaks to a blindness, or more precisely, an indifference to cruelty. This also crops up in domestic policy, where the indifference is particularly acute when those who suffer are somehow other: black or brown, female or trans, Muslim or migrant.How else could this administration have executed for so long its zero-tolerance approach to family separation of immigrants and asylum seekers? I don’t believe in open borders, but I do believe in humane borders. I do not believe that a parent seeking asylum — which is still legal in this country, it bears repeating — should have a child ripped from his or her arms. I don’t believe that people — including children — should be caged like animals and deprived of basic human necessities and basic human dignity.

What is happening at our border is unconscionable, a violation of basic human rights, a complete moral violation. And yet the president on Thursday will make a mockery of the country’s freedom celebration by turning it into a muscle-flexing political pep rally.

Trump will likely spend millions on his vanity spectacle just weeks after his administration argued in court that immigrant children didn’t need to be provided soap and toothbrushes.

If the emerging culture of the world has to be put under boot for the established culture to maintain power, so be it. This is the white supremacist mantra; this is the Trump message.

There is a through line in Trump behavior, and it runs directly through his perception of white cultural dominance.

There, I said it. And I’m going to continue to say it.

I know that this may read as redundant. I worry about as much every time I begin to write. But I also know that history is sitting in judgment, that when this dark era draws to a close, an accounting must be made, a record made. None of us will be immune.

The questions will come without room for equivocation or adjustment: Where were you when the bodies floated in the Rio Grande? What did you say when this president bragged about assaulting women and defended men accused of doing the same? What was your reaction when he saw very good people among the Nazis? Where was your outrage when thousands died in Puerto Rico?

I plan to say, or have my work say, that I never faltered, that it never became normal to me, that my heart bled as well as my pen.
What will you say?
The Times is committed to publishing a diversity of letters to the editor. We’d like to hear what you think about this or any of our articles. Here are some tips. And here’s our email: letters@nytimes.com.

Charles Blow joined The Times in 1994 and became an Opinion columnist in 2008. He is also a television commentator and writes often about politics, social justice and vulnerable communities. @CharlesMBlow • Facebook
Posted by Angela Valenzuela at 8:27 PM