Schools and race: Still separate after all these years 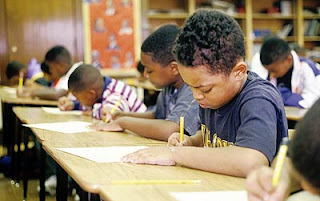 Schools and race: Still separate after all these years
Apr 26th 2007 | LOUISVILLE AND RALEIGH
From The Economist

Five decades after the Supreme Court struck down school segregation, black and white children continue to learn in different worlds. And it could get worse

LARRY BISIG grew up in Louisville, Kentucky, where he went to Catholic school and where he now runs a local marketing firm. He has seen his local school district's history from several angles. In 1975, when a court-ordered desegregation drive began, his public-school friends started waking up at five o'clock to be bussed to new schools across town. His Catholic school made reassuring intercom announcements, saying that the public-school buses had arrived safely—despite the violent protests and threats. And he remembers the sudden influx of new students into his own school, as white Protestant families chose a Catholic education for their children rather than sending them to public school with blacks.

By the 1990s, however, the Jefferson County school district, which includes Louisville, was far more racially integrated (see chart). Its public schools had also become much more attractive to the white families who had stayed in the district, and Catholic schools had such a hard time keeping students that Mr Bisig's marketing firm began working with some of them to handle the stiffer competition. These days, Jefferson County is eager to keep the racially integrated school system it has created. But that integration—which began with a federal court order driven by Supreme Court precedents—is now under threat from the Supreme Court itself.

The court's two newest justices—Samuel Alito and the chief justice, John Roberts—are serving their first full term together in 2006-07. And although the new court has sometimes aligned in unexpected ways, George Bush's two appointees have given a more conservative tilt to some important decisions. Most notable was a five-to-four ruling last week upholding a congressional ban on partial-birth abortions. Sandra Day O'Connor, a moderate, had previously provided a pivotal vote against abortion restrictions. Last week's ruling thus seemed to confirm that her replacement by Justice Alito will lead to a conservative shift in at least some types of cases. Race-conscious education policy, which Justice O'Connor broadly favoured, is among the areas most likely to change.

In the coming weeks the court will announce its decision on a pair of cases that it heard in December, involving the Jefferson County school district and another in Seattle. Both districts act aggressively to maintain racial balance in their schools, but may not be able to continue.

In Seattle, where places in the most popular high schools are scarce, officials use race to decide who gets left out, so that a school's racial mix will not deviate too much from the district average. Jefferson County uses a broadly similar system to ensure that black students, who are 35% of the total, make up 15% to 50% of the student mix in every school. A white student's mother has claimed that he was deprived of a good school place there to preserve this racial mix, violating his rights. Lower courts have upheld both districts' methods, but the newly conservative Supreme Court is examining the issue.

Even without this judicial complication, America's school boards are being sorely tested by economics and geography. Blacks and whites still tend to earn different incomes and live in different areas. And those stark facts undermine many districts' efforts to foster racially integrated schools and equal education. As a result, 53 years after Brown v Board of Education—in which the Supreme Court declared school segregation to be unconstitutional—the gulf between blacks' and whites' educational attainment remains glaringly wide.

The winning lawyer in the Brown case was Thurgood Marshall, a descendent of slaves who would later become a Supreme Court justice himself. When the court issued its unanimous opinion that “separate educational facilities are inherently unequal”, Marshall was so pleased with the decision that he said “we hit the jackpot”. For the past five decades, America's judges, politicians and school boards have wrestled with the challenges of putting the court's principle into practice. Despite all the integration that these reforms have achieved, however, Marshall's jackpot has so far brought only a fraction of the equality that it once seemed to promise.

Segregation no longer has the force of law, but it is still a fact of life in most cities. Many districts are actually going backwards, as Charles Clotfelter of Duke University documented in a 2004 book, “After Brown: the Rise and Retreat of School Desegregation”.

The reasons for this failure have long been more apparent than the solutions. High-income and middle-class white parents have moved in droves to suburban school districts that are outside the reach of city ones, thereby using the housing market to buy a better education for their children. Other affluent families have quit the public system entirely, and use private schools instead. And even though many white children still attend public schools in cities, big gaps in wealth—and in parents' ability to work the system—force school administrators to adapt constantly if they want to keep their schools racially integrated.

Louisville at least manages to include the suburban bits of Jefferson County in its school district. In many American cities, especially in the north-east and Midwest, middle-class parents can choose from a variety of separate districts in nearby suburbs, leaving struggling cities behind.

Nothing can be done about this because the Supreme Court ruled in 1974, in Milliken v Bradley, that desegregation cannot be required across school district lines, even if it is compulsory within them. That decision left the door wide open for white flight, and marked a constitutional limit for America's drive to integrate its schools. The city involved in the Milliken decision, Detroit, has been left with one of America's starkest racial divides between city and suburbs, and the quality of the city's public schools has collapsed.

Colour-blind alternatives
The question facing many school boards now is whether to keep focusing intently on the racial mix of each school, or to pour their energy instead into offsetting the disadvantages faced by any child, regardless of colour, whose parents are poor, uneducated or just hopeless. The Supreme Court may soon make this decision for them, in its rulings on Seattle and Jefferson County. But even if the court issues a vague or flexible opinion, a growing number of school boards have been considering an alternative approach to improving equality.

The Wake County school district in North Carolina, for example, began mixing students from different economic backgrounds together in 2000, instead of continuing to integrate them by race. Some 40 districts across America now do something similar, often using the receipt of free or reduced-price lunches as a simple proxy for low-income status.

Wake County, which includes the city of Raleigh, does not reassign students individually. Instead, it divides its district into hundreds of “nodes”, each one classified by the number of children who qualify for lunch subsidies. It rebalances schools by moving entire nodes at once, which both avoids singling out poor children and lets neighbourhood friends stick together. The goal is to ensure that no school in the district has more than 40% of its students on free lunches, or more than 25% performing below their grade level.

The Supreme Court in session

The county's schools perform well. And despite overcrowding and a population that is 27% black and 45% non-white overall, affluent white families are still pouring into the district and enrolling their children in its public schools. True, the rapid growth is taxing the district's capacity and stirring lots of complaints, but many other urban school districts would love to have too many rich white kids.

The Wake County model will tempt many other school boards if the Supreme Court forces districts to scale back or dismantle race-based integration schemes. But its new approach is not the only reason for its success. It previously had a good history of integrating schools racially with support from parents, and had made extensive use of magnet schools—which offer variety and innovation—to draw white students back into Raleigh. Teachers in North Carolina are not unionised. And the county was always well off economically.

Whatever school districts do, says Derek Neal, an economist at the University of Chicago, any serious effort to bridge the gap between poor (disproportionately black) children and everyone else will have to involve spending more money—probably lots more—on those poor students, since they clearly need more help. As in any other labour market, says Mr Neal, “if you want more work done, you have to pay for it.”

It's really about the middle class
This point often gets lost in debates about school vouchers, choice and the role of competition. At the core of that debate lie competing theories about what disadvantaged students need most. Voucher advocates argue that they need their own money to spend, so that schools will compete over them.

Many voucher opponents, by contrast, believe that what poor (or black) children need most is access to rich (or white) children every day in the classroom, along with all the advantages that affluent and involved parents bring to their children's schools. They favour spending more money on schools and teachers' salaries, but fear that competition from outside the system would undermine integration.

Both arguments, however, have a debatable premise in common. They assume that the main educational goal of America's voters and policymakers is to improve the lot of children from low-income families, who tend to be the slowest learners. Many pressure-groups pay lip-service to this notion only to win support for schemes which they prefer for other reasons. In America's current political environment, pandering to middle-class gripes appears far more popular than really helping the poor. So the odds that any education reform with voters' support will genuinely be aimed at poor children seems depressingly low these days—whatever the Supreme Court rules, and however many years have elapsed since Brown.