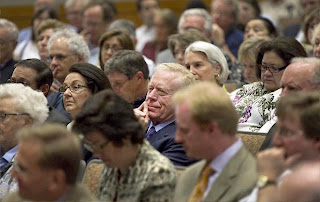 Change and innovation will propel the University of Texas in its mission to "solve global problems, expand knowledge and improve lives throughout society," UT President William Powers Jr., said Monday in describing a vision of continued excellence in research and teaching despite dwindling state appropriations.

Speaking in the Student Activity Center before an invitation-only, friendly crowd that delivered a dozen ovations during his 50-minute speech, Powers said UT needs to reinvent the way it conducts business, in part by raising graduation rates and cutting costs.

"Our current approach simply is not sustainable," he said.

Monday's speech included the UT president's most expansive comments on the importance of a broad range of research and teaching since statements and actions by the chairman of the school's governing board prompted an outcry from some lawmakers, alumni and donors.

Gene Powell, chairman of the UT System Board of Regents, has come under fire for hiring an adviser — since dismissed — who described much academic research as lacking in value. And Gov. Rick Perry has stirred concern as well with his calls to freeze tuition for four years and to offer a bachelor's degree program costing no more than $10,000, including books.

The crowd that nearly filled the 475-seat auditorium for Powers' speech included members of the Commission of 125, the Development Board, the Advisory Council, the Faculty Council, student leadership groups and the Staff Council Executive Committee.

A few hours later, UT's Faculty Council unanimously made a vote of "complete confidence" in Powers and his leadership team. Similar support has already come from the Ex-Students' Association and other groups.

"In the last four to five months, I think President Powers has put himself on the line," said Dean Neikirk , chairman of the Faculty Council and a professor of electrical and computer engineering.

In his speech, Powers did not mince words in outlining UT's immediate challenge of remaining a top research university. State appropriations to UT in the Texas House version of the two-year state budget calls for a 20.5 percent decrease, about $57.1 million. The Senate version reduces general revenue by 16 percent, $44.9 million.

If the Senate version is adopted, he said, UT's budget preparations are nearly on target. However, if the House version passes, UT will have to make up the difference with reserve balances, additional budget cuts and layoffs.

"There is no question that this would further harm our educational mission," he said. "UT is already lean," he said, noting that it has eliminated 250 positions since 2009.

UT cut 5 percent of its operating budget in the 2009-10 fiscal year. This year, Powers has asked all deans and vice presidents to plan for an additional 10 percent cut, about $29 million .

The Commission of 125, a blue-ribbon panel that spent two years studying the university, recommended in its report, among other things, that the size of the student body should be reduced to improve the educational experience. UT, however, has been unable to do so because of the budget implications of reducing enrollment. Revenue from tuition would also go down during a period of tight finances.

Not everything can be measured in dollars and cents, Powers said Monday, touting that the recent attack on Osama bin Laden's compound in Pakistan was planned and commanded by Vice Admiral William McRaven, a 1977 UT journalism graduate. He also introduced two UT professors and senior Katie Maass, a chemical engineering major, to drive his point home.

Maass' research on projects to improve drug effectiveness using nanoparticles earned her a five-year, $250,000 research grant from the Hertz Foundation.

"Exposing young people to that kind of world-class research is what Texas needs in order to lead," Powers said.
Posted by Dr. Patricia D. López at 11:30 PM