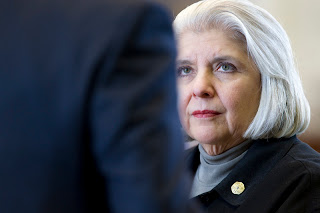 An increasingly bitter disagreement over the future of the University of Texas at Austin between University of Texas System regents' chairman Gene Powell and state Sen. Judith Zaffirini, D-Laredo, is ratcheting up the ongoing debate surrounding higher education in Texas.

Any thought that the tense atmosphere would calm following the departure of controversial employee Rick O'Donnell from the UT System can likely be laid to rest. This morning, Zaffirini, the chair of the Senate Higher Education Committee and the most vocal critic of reformist regents, specifically called out Powell, saying in a statement, "Since his election in February he has caused a firestorm of negativity that is detrimental to UT-Austin, to the system, to higher education in general — and to his relationship with legislators."

The comments were in response to a report by the Austin American-Statesman, which obtained a draft copy of Powell's goals. In the document, Powell indicated a desire to see undergraduate enrollment increased at UT by 10 percent each year for four years, and to see tuition drop by approximately 50 percent. It also included the creation of a "high quality, low cost degree" and developing a timeline to make UT the top public university in the country.

Zaffirini says the goals are inconsistent — "mutually exclusive" even — and that Powell's proposed changes are "detrimental to the pursuit of excellence."

Powell's goals are consistent with previous statements he has made, including his enthusiasm for meeting a challenge by Gov. Rick Perry to create a $10,000 bachelor's degree — books included. Higher Education Commissioner Raymund Paredes said such a degree is "entirely feasible."

Recently, UT regents and representatives from a number of universities within the system made a day trip to Arizona State University, which has gotten notice for deliberately seeking to increase accessibility to higher education by boosting enrollment and attempting to maintain affordable tuition. This event drew some attention when UT student body president Natalie Butler warned against using ASU as a model (Chancellor Francisco Cigarroa apologized to ASU officials for the letter).

In fact, Powell's three-month old tenure as chairman of the board of regents has been marked by such heated exchanges. In addition to the dust storm he kicked up with the hiring of O'Donnell, he previously drew heat for comments that he later attempted to walk back about how not all education had to be of Cadillac-caliber, and that a Chevy Bel-Air education was fine.

"At a time when regents should be working with legislators to minimize dramatic funding cuts," Zaffirini says, "Chair Powell instead apparently is proposing changes that are detrimental to the pursuit of excellence."

We are awaiting a reponse from the UT System and will update this post accordingly.
Posted by Dr. Patricia D. López at 12:11 PM