Enlarge Photo by Martin do Nascimento 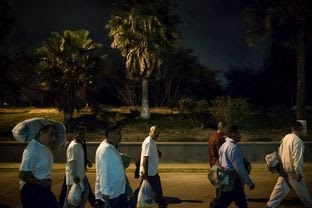 Enlarge Photo by Martin do Nascimento
A group of undocumented Mexican national ex-offenders enter Mexico at the US-Mexico border crossing at Brownsville/Matamoros after being deported from the United States on Nov. 4, 2015.
.

The Texas Tribune is taking a yearlong look at the issues of border security and immigration, reporting on the reality and rhetoric around these topics. Sign up to get story alerts.
Juan Francisco de Luna Vasquez passed through the Webb County jail at least four times on more than a half dozen charges before allegedly beating his wife to death with a hammer last year in Laredo.
Victor Reyes had already spent three months in the Hidalgo County Jail, four months in state custody and six years in federal prison for multiple felony offenses by the time he went on a random shooting spree in Houston, killing two people and injuring three more in January 2015.

And before Juan Francisco Lopez-Sanchez allegedly shot Kate Steinle to death on Pier 14 in San Francisco last summer, authorities say he had racked up a criminal record including seven felonies, mostly drug related, and a 1997 arrest for assault.

There are peculiarities to each case, but they have something in common: all three men were thrown out of the country multiple times by federal immigration authorities but returned illegally — through the Texas-Mexico border — before committing new crimes in the United States, records obtained by The Texas Tribune show.

Their crimes put them at the center of a red-hot political debate about illegal immigration, the revolving door at the southern border and controversial immigrant catch-and-release policies that pit deportation-fixated conservatives against liberal immigrant advocates.

A Texas Tribune analysis found that undocumented immigrants make up a smaller share of those imprisoned in Texas — including on Death Row — than of the general population. However, a veil of government secrecy and inconsistent record-keeping make it difficult to accurately determine how many criminal immigrants are in the country or how many crimes they have committed. Fear, outrage and political jockeying have largely filled the information void.
Posted by Angela Valenzuela at 9:06 PM