The Republican Party: Off the Deep End

According to Bruce Bartlett, longtime aide to Ronald Reagan and Republican adviser, "the Republican Party needs to die, it's already a zombie. It's brain dead". (According to Insider, the Republican Party Needs to Die). It is no wonder that longtime republican party insiders are deeply troubled by the move of the republican party from the conservatism that once advocated for small government, minimal government regulation, and a conservatism that erred on the side of not making major changes without popular support by the majority of Americans, to a party that can only win elections through gerrymandering, voter suppression of the elderly, people of color, young students, and women as these voters pose a threat to republican power. Today's republican party, openly allows racist rhetoric to define its identity. 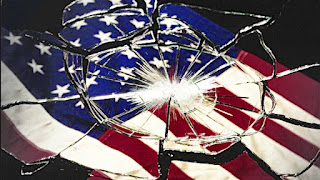 The elimination of the Fairness Doctrine, which required news coverage to offer equal time to the opposing views of liberals and conservatives, allowed for informed citizens to make responsible voting decisions. The end of the Fairness Doctrine enabled special interests to masquerade as news to advance their political agenda. Fox News is the primary example.

The effect of the Citizen's United Ruling further diminished the citizen's voice. For removed from uniting citizens, the republican controlled Supreme Court's Citizen's United ruling made it so that a corporation's voice amounted to more than the voice of the individual citizen. Nothing could be more authoritarian, un-American or un-Democratic.

The failure of the American News media to reveal right-wing extremism has lead to decline. The failure of media by allowing right-wing extremism to become normalized has transformed a great nation into one corrupted by tabloid news sources, where racism is normalized, and where critical thinking becomes a threat to the establishment. The term liberal has become so demonized by by the right-wing media that dyed-in-the-wool liberals now condemn other liberals for being liberal as this term has been re-branded into something different.
Posted by Greg Pulte at 4:50 PM