This is what we have to put up with.

By Tal Kopan and Lauren Fox, CNN
Washington (CNN)President Donald Trump, using vulgar terms, rejected a pitch Thursday from a bipartisan team of senators on a compromise immigration deal to protect DACA participants while increasing border security.
"Why do we want all these people from 'shithole countries' coming here?" Trump told senators in the Oval Office, a source briefed on the meeting told CNN.
The source said Senate Minority Whip Dick Durbin was explaining to him a proposal to end the visa lottery in exchange for Temporary Protected Status (TPS) for countries such as El Salvador. Durbin was going through a list of TPS countries that would be covered. When he got to Haiti, Trump asked why the US wants more people from Haiti and African countries.
The Washington Post first reported Trump's comments.
The President added that the US should get more people from countries like Norway. Norway Prime Minister Erna Solberg visited the White House Wednesday.

Durbin and Republican Sen. Lindsey Graham were meeting with Trump and GOP lawmakers to discuss a compromise plan from a bipartisan "Gang of Six" senators, but were rebuffed and told to keep working, Durbin said told reporters.
White House press secretary Sarah Sanders said Thursday afternoon: "There has not been a deal reached yet."
The January 19 deadline for reaching agreement on government spending is rapidly approaching -- which many Democrats insist must include immigration -- and the Deferred Action for Childhood Arrivals program is set to end in early March.
"I'm not sure what the next step will be," Durbin told reporters. "The President invited us to -- at his little get-together in the Cabinet room -- to come up with proposals, and we did. It's a bipartisan proposal which we've worked on for four months in the Senate, and I don't know what happens next."
Without the President's buy-in, the work of the group can't reach the Senate floor, Republican leadership said.
White House legislative director Marc Short told reporters on Capitol Hill after the meeting that the President wants a "broader" deal on the family piece than just the covered recipients.
"There is a reason why the President has said that is not acceptable to him and sent everybody back to the same drawing board that Kevin McCarthy drew up on Tuesday," Cotton said after the meeting. 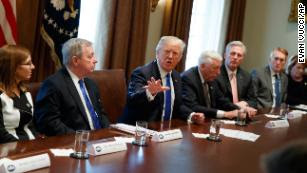 Here are the key players in Congress on immigration
The proposal presented by the bipartisan Gang of Six was a path to citizenship for undocumented immigrants who came to the US as children -- beyond just those who were enrolled in DACA when it ended, according to lawmakers and sources familiar with the meeting.
In addition, they proposed a down payment of the $1.6 billion requested by the administration this year on border security, limits to the ability of recipients to sponsor family members and an end to the diversity lottery and reallocation of those visas in part to cover people who were under Temporary Protected Status.
Republican Sens. Tom Cotton and David Perdue and Republican Reps. Bob Goodlatte, Kevin McCarthy and Mario Diaz-Balart were also at the Trump meeting on Thursday. Cotton, Perdue, Goodlatte and McCarthy pushed back at the Durbin and Graham proposal.

Senate Majority Whip John Cornyn said the gang of six's work is not enough to get a vote, and said that any path forward will have to come from talks among a broader group of lawmakers including Republican leadership.
"Hopefully they'll contribute their ideas to the solution but ... six people can't agree to something that will bind Congress and the House," Cornyn said.
Asked what it would take to bring something to the floor -- Cornyn said any deal would have to hit the four items identified by the President in a meeting on Tuesday -- a DACA fix, border security, something to curtail "chain migration" or family-based migration, and ending the diversity lottery -- and be "something that the President would sign."
"We're going to have -- more than a signal -- we're going to have a very clear message this is something he'd support, that he'd sign," Cornyn said. "I think the message has now been delivered that we need to get everybody at the table and we'll take the best of their ideas." 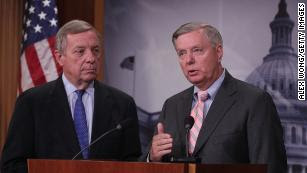 Lawmakers compete to carry President's mantle on DACA as talks continue
In a joint statement after the meeting, the six senators in the Durbin group noted their deal hit those four points and pledged to work to seek support from colleagues, without acknowledging the setback.
"President Trump called on Congress to solve the DACA challenge. We have been working for four months and have reached an agreement in principle that addresses border security, the diversity visa lottery, chain migration/family reunification, and the Dream Act—the areas outlined by the President. We are now working to build support for that deal in Congress," wrote Durbin, Graham, Republicans Jeff Flake and Cory Gardner and Democrats Michael Bennet and Bob Menendez.
CNN's Abby Phillip, Jim Acosta, Dana Bash, Dan Berman, Jeremy Diamond, Phil Mattingly and Catherine Treyz contributed to this report.
Posted by Angela Valenzuela at 5:26 PM