Immigration debate heating up in Senate 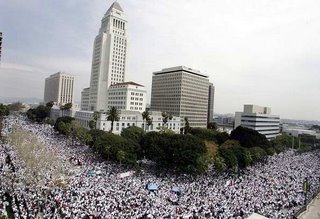 WASHINGTON (AP) -- Founded by immigrants and praised as a haven for the oppressed, the United States now is struggling to decide the fate of as many as 12 million people living in the country illegally.

The Senate takes up the emotional debate on the heels of weekend rallies that drew hundreds of thousands of people protesting attempts to toughen laws against immigrants. Among the election-year proposals that President Bush and members of Congress are considering:

-Erecting a fence on the Mexico border to deter illegal immigration.

-Treating people who sneak across the border as felons to be deported.

-Allowing foreigners to stay in the country legally as custodians, dish washers, construction workers and other low-paid employees.

-Allowing those working in the U.S. a path to citizenship.

-Requiring them to get in line behind everyone else back in their home countries who want to become Americans.

Senate aides met into the evening Sunday in advance of a Senate Judiciary Committee meeting to debate legislation, but there was no evidence of a breakthrough on the issue most in dispute. Lawmakers have been divided on whether illegal immigrants should be required to return to their home country before they become eligible for U.S. citizenship.

For his part, Bush arranged to attend a Monday naturalization ceremony for 30 new citizens at Constitution Hall, a few blocks from the White House.

And demonstrations are planned near the Capitol, including a prayer service with immigration advocates and clergy who plan to wear handcuffs to demonstrate the criminalization of immigration violations.

Bush is going to Mexico this week for a meeting with the leaders of Mexico and Canada. Secretary of State Condoleezza Rice said Sunday it's important that Mexico "recognize the importance of defense of the borders and of American laws."

Protests raged across the country over the weekend, led by more than 500,000 people who marched through downtown Los Angeles on Saturday in one of the largest demonstrations for any cause in recent U.S. history. Marchers also took to the streets in Phoenix, Milwaukee, Dallas and Columbus, Ohio.

Demonstrations continued Sunday, when nearly 3,000 people, many wrapped in Mexican flags, rallied at the Ohio Statehouse in Columbus and an estimated 3,500 United Farm Workers members and their supporters protested in Los Angeles.

The president, working hand-in-hand with the business community that relies on cheap labor, is pressuring Congress to allow immigrants to stay in the country legally if they take a job that Americans are unwilling to do.

Judiciary Chairman Arlen Specter, R-Pa., also supports the idea and has vowed that his committee will advance a bill to the full Senate on Monday, even if they have to work "very, very late into the night."

"If they're prepared to work to become American citizens in the long line traditionally of immigrants who have helped make this country, we can have both a nation of laws and a welcoming nation of workers who do some very, very important jobs for our economy," Specter said Sunday on ABC's "This Week."

Senate Majority Leader Bill Frist, R-Tenn., has said that whether or not a bill gets out of the Judiciary Committee, he is opening two weeks of debate on the issue Tuesday. He has offered a plan that would tighten borders, add Border Patrol agents and punish employers who hire illegal immigrants because he says the most important concern is improving national security in an age of terrorism. His bill sidesteps the question of temporary work permits, but he has said he's open to the idea.

Democrats have said they will do everything they can to block Frist's bill. Sen. Edward Kennedy, D-Mass., said Sunday that legislation creating tougher enforcement does not do enough.

"We have spent $20 billion on chains and fences and border guards and dogs in the southern border over the last 10 years," Kennedy said on "Face the Nation" on CBS. "And it doesn't work. What we need is a comprehensive approach. I think President Bush understands it."

Where Kennedy and Bush differ is on the question of what to do with foreigners who are already living and working in the United States. Kennedy and Sen. John McCain, R-Ariz., have a bill that would allow those immigrants to apply for citizenship once they pay taxes and a fine and learn English.

Critics like Rep. Tom Tancredo, R-Colo., say that would give amnesty to people who have broken the law by entering the country without permission.

"It's a slap in the face to every single person who has done it the right way, and to everybody who's waiting out there to do it the right way," Tancredo said. "It's bad policy. And it's also, I think, for the Republican Party especially, bad policy."

Bush wants to give foreign workers a guest permit to stay for a specific amount of time to do a job, without a path to citizenship. Sens. John Cornyn, R-Texas, and Jon Kyl, R-Ariz., propose to let employed illegal immigrants stay for five years but then leave, pay fines and apply to re-enter the country.

If the Senate can agree on the bill, the work won't be over to get legislation to Bush's desk to become a law. The House passed a bill last year that increases penalties for illegal immigration activities, requires employers to verify the legal status of their employees and provides $2.2 billion for a 700-mile fence across the border. But it did not address the guest worker issue.