News from Denver, CO: Backlash Against the Backlash Grows 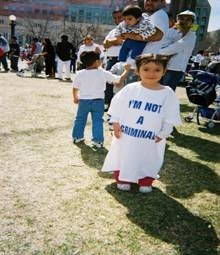 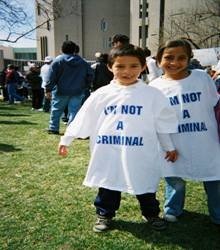 I want to share Dr. Estevan Flores' commentary on the march in Denver. -Angela

They came from all across Colorado, from Denver to the West Slope and Greeley to Pueblo and all points in between. Waving American flags along with Mexican, Salvadorean, Guatemalan, and others, more than 150,000 people jammed downtown Denver on Saturday to protest anti-immigrant legislation in Washington, DC, and ongoing attacks on immigrants here in Colorado.

Why did so many people come together for the largest political rally in decades in Denver? Here's why....The U.S. House of Representatives is expected to vote soon on HR 4437, sponsored by Rep. James Sensenbrenner (Wisconsin) and supported by Colorado's own anti-immigrant politician, Rep. Tom Tancredo (Littleton). The bill focuses on punishment only, not comprehensive solutions, building a wall along the US's southern border, scapegoating immigrants, and criminalizing anyone - churches, public service agencies, non-profit groups, and others - providing aid to immigrant workers lacking documentation.

This legislation is so mean-spirited that Los Angeles Roman Catholic Cardinal Roger Mahony has said that, if it passes, he will allow his priests and others to act against it as people need to be fed, clothed, housed, and provided medical care if they are sick. Senator Hillary Clinton (New York) said recently that "This bill would literally criminalize the Good Samaritan and probably even Jesus himself. We need to sound the alarm about what is being done in the Congress."

Here in Colorado, one of the national centers of anti-immigrant scapegoating, despite the many contributions of immigrants to our agricultural, construction, service, and tourism industries, the rally's turnout clearly overwhelmed event organizers who had hoped for 2,000 people and wound up filling the entire Civic Center Park from the Denver City and County Building all the way up the hill past the State Capitol!

Holding signs that said "We Are Not Criminals," "we are honest and work hard," and "you can't spell U.S.A. without US," the huge, peaceful crowd listened to speakers, music, and started an impromptu march that closed down parts of 14th Avenue and Colfax Avenue. One sign summed it up nicely "the more that you attack us, the stronger we get."

From Ch. 9’s website—Police estimated 30,000-50,000; rule of thumb by a veteran sociologist who attends rallies and marches (me—ETF), “always multiply by at least two or three times what police estimate”

The immigration reform rally in Denver was one of the largest protests across the country Saturday. March 25, 2006. 5:00 p.m. The rally started at 10:00a.m. in downtown Denver. Police estimate about 30-50 thousand people jammed the streets causing road closures.

Authorities closed Broadway, Bannock, Colfax and 14th Avenue for the protest. Congress is on the verge of passing legislation that will decide how immigrants will be treated for decades to come.

Supporters are demonstrating across the nation because they fear that immigration reform could pass through the Senate Judiciary Committee without reflecting the wishes of the people, says local community organizer.

Editor's Note: There are clear signs that immigrants and their supporters in the religious, state government, labor and business sectors are fighting back against xenophobia being fanned by hard-line opponents of comprehensive immigration reform, writes Frank Sharry, executive director of the National Immigration Forum.

WASHINGTON, D.C.--If 2005 was the Year of the Minutemen, 2006 is becoming the Year of Immigrants Rising. Just look at the tens of thousands of immigrants who marched in downtown Chicago last March 11 for immigrant rights and against restrictive immigration proposals.

Less than three months ago, the leadership of the House of Representatives, in a vicious act of "drive-by" legislating, rushed through a bill that experts consider to be the most anti-immigrant piece of legislation in the United States in 80 years.

Here are some of the lowlights of the Sensenbrenner bill, HR 4437:

-- 11 million undocumented immigrants would be declared "aggravated felons" for having come to this country to do back-breaking work at low wages in order to feed their families.

-- Priests, nuns, health care workers and other helpers would be threatened with jail time for assisting the undocumented.

-- Day labor sites would be shut down by federal law, overruling the hard work of activists and enlightened local communities attempting to solve problems caused in part by Congressional inaction on comprehensive immigration reform.

-- Seven hundred miles of walls would be built between the United States and our friendly neighbors to the south, an act that has touched off a diplomatic crisis with Latin America.

The self-righteous politicians who cooked up this bill were undoubtedly pleased with their handiwork. They wanted their colleagues to go back to their districts over the holidays with something to crow about on talk radio and at town hall meetings. The lucky were invited to the Lou Dobbs show.

But politics is like physics: For every action there's a reaction. What looked so tempting last year is looking counterproductive this year. It seems the House anti-immigrant tantrum has angered and activated immigrants, their allies, religious leaders and local governments like never before. Here is are some recent events:

-- On March 7, over 30,000 immigrants showed up on the west lawn of the U.S. Capitol in Washington, D.C., to protest the Sensenbrenner bill and to call for legalization. Families came from work and from up and down the East Coast to show their faces and raise their voices. Many carried simple homemade signs that said, "I am not a criminal."

-- Later that week Chicago was the scene of a rally that according to police drew at least 100,000 immigrants, and organizers claimed drew over 300,000. Both the Chicago and D.C. rallies were marked by unprecedented cooperation between the labor movement, immigrants rights advocacy organizations and community organizations led by immigrants.

-- Cardinal Mahony of Los Angeles recently announced that if the Sensenbrenner bill becomes law he will instruct his priests to defy it and provide services to the undocumented, even if it means going to jail.

-- City councils and county supervisors from Southern California to Ohio and Massachusetts are passing resolutions against the Sensenbrenner bill and calling for comprehensive reform that puts immigrants onto a path to citizenship.

-- Beyond Chicago, in Portland, Ore., 5,000 people protested HR 4437. Religious leaders are staging vigils in Ohio. Activists are demonstrating in the Michigan State House, and immigrants are pouring into Washington, D.C., to lobby for comprehensive reform along the lines of the McCain-Kennedy bill pending in the Senate. When Sen. John McCain traveled to Miami and New York to talk about immigration reform, 1,000 immigrants showed up in each city to cheer.

-- Even the undocumented Irish from the New York and Boston are becoming active. Some 2,000 descended on Washington, D.C., this week. Wearing T-shirts emblazoned with green lettering that said "Legalize the Irish," they lobbied lawmakers to back the McCain-Kennedy bill with its earned legalization provisions.

-- The business community is also upset over the Sensenbrenner bill. Groups of employers are flying into Washington, DC and demanding meetings with their representatives. Their message: they need immigrant workers and want to see their work force legalized, not deported.

Call it the backlash to the backlash. Some are even calling the passage of the Sensenbrenner bill the "Proposition 187 moment" of this decade, referring to 1994, when California Gov. Pete Wilson and the Republican Party won re-election by supporting the anti-immigrant ballot initiative Prop. 187. The measure and the ugly campaign for it so angered Latino and Asian immigrants that it led to a surge in citizenship and voting that threw the Republican Party out of virtually every statewide office for a decade.

Obviously, some Republicans understand that supporting immigrants is good for the country and their party. Sen. McCain of Arizona, a leading contender for the 2008 Republican nomination for president, gets it. So do some of his possible rivals for the Republican nomination, Sens. Sam Brownback of Kansas and Chuck Hagel of Nebraska.

But more typical of the current thinking in GOP leadership circles is Sen. Bill Frist of Tennessee. He's gearing up to usher a Sensenbrenner-like bill in the Senate, presumably to score points with the same rabid anti-immigrant crowd the House played to. He probably thinks it will help him in the GOP presidential primaries.

Well, Pete Wilson thought his 1994 anti-immigrant platform would help his 1996 run for president. But his role in turning California from a purple state into a blue one and his reputation as a polarizing figure in immigrant communities made Wilson so radioactive no national politicians will be seen with him to this day.

Here's a political prediction: over time, the Minuteman vote will pale in comparison to the political tsunami gathering strength in immigrant communities and among pro-immigrant constituencies across America.

Posted by Angela Valenzuela at 9:36 AM