For the two Austin schools most in need of improvement this year, the path to meet the new TAKS passing standards finalized this week by the state won't be easy.

Pearce Middle School in East Austin, where the district held a planning forum Tuesday evening, will have to show double-digit percentage-point gains in the passing rate for this year's science test. Students will take the test for the first time this year on May 1.

Campuses must meet state standards within all student groups on all subjects on the Texas Assessment of Knowledge and Skills or risk closure. Pearce, now entering its third year of "unacceptable" status in the accountability system, could be closed by the state this year.

State officials said passing rates at Johnston High School would have to show significant gains on both the math and science portions of the tests, which students take at the end of this month and in May, to keep that campus open.

Superintendent Pat Forgione thanked parents at the forum and said their support for helping students and keeping the campus open is critical.

"This is like preparing for a hurricane. Tonight, we have a storm warning," he said.

In recognition of the uphill battle Pearce faces, several East Austin advocates have been pitching in to help. Michael Lofton, a local talk-show host who organizes monthly conferences for African American men and boys, said he and members of other groups, including churches and local neighborhood associations, have met to coordinate mentoring and social services for Pearce students and their families.

"I know this is kind of at the 99th hour," Lofton said. "But if all goes well, I think we can make a lot of headway by the end of the year."

Most observers agree that meeting the state's new 2008 passing standards will be difficult for schools like Pearce and Johnston. This year, the minimum passing rate for English has been increased from 65 percent to 70 percent. In math, 50 percent of students must pass, up from 45 percent, and in science it went from 40 percent to 45 percent.

Both schools could get a reprieve by getting just to the "acceptable" standard. Johnston would have to improve performance in 20 areas to meet that so-called required improvement standard. Pearce would have to do it in 16 areas. Reaching that standard is what got Webb Middle School in North Austin off the state's low-performing list and saved it from the threat of closure last year. 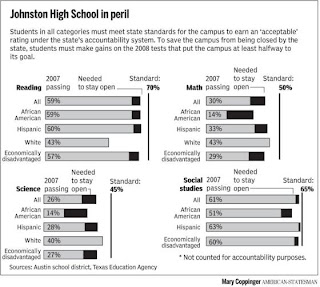 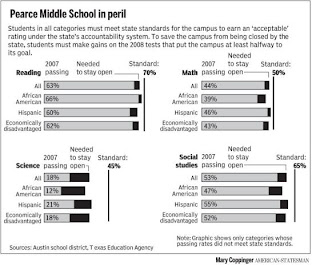