We celebrate report cards in my family by letting the boys pick dinner. My oldest always wants steak. My youngest likes beige food—pasta, mac & cheese, and potatoes. When he finished the 3rd grade this year, he chose KFC (beige again) for getting all A’s except for two B’s. I asked him what he learned this year, and he mentioned a lesson about the double helix and that squids have three hearts. 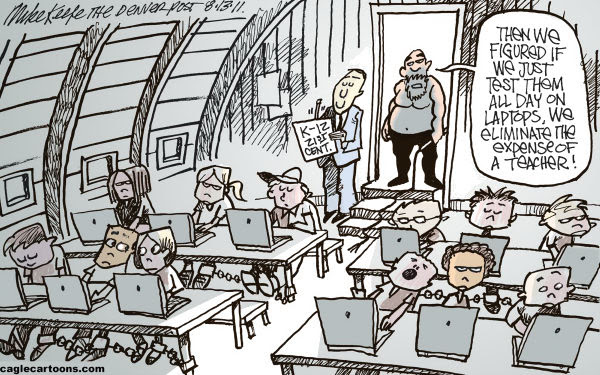 Then he said this: “I learned strategies. How to focus and… I forget the other one. Oh yeah, practicing doing tests.” He’s talking about the State of Texas Assessments of Academic Readiness that Texas began administering this year in the hopes that testing our children will make them smarter. Texas is paying Pearson Education $470 million over five years for STAAR test, but since Texas also cut $5.4 billion from the public school budget, the state decided the tests shouldn’t actually count towards anything.

Meanwhile, Sandy Kress sends his children to private schools in Austin where, like at 90% of Texas private schools, they don’t take the state’s standardized tests. Where his children go to school doesn’t matter, except that Kress was the “key architect” of “No Child Left Behind” and now is the lead lobbyist for Pearson.

While Kress’ kids get a first-class secondary education, his tests have incited an open revolt over the test-first, test-later culture. So far, 520 Texas school boards representing millions of schoolchildren have passed a resolution opposing over-testing. Even the Lufkin Chamber of Commerce has joined the revolution against the let-them-eat-tests oligarchy. Now the Texas protest has gone viral. A national resolution has thousands of signatories, and parents are protesting Pearson’s headquarters in New York.

Newt Gingrich won back Congress with his Contract With America by fighting this kind of out-of-touch elitism. The Contract’s first principle was that “all laws that apply to the rest of the country also apply equally to the Congress.” Nothing came of it, but this bullet point hit the bull’s eye with focus groups because of the House banking scandal, Speaker Jim Wright’s book sales to lobbyists, and Dan Rostenkowski’s corruption charges. There was the sense that Congress was not living by the same rules the rest of us did.

Some of that unfairness applies here. Americans rightfully loathe living by rules that don’t apply to those who make the rules. We don’t like that George W. Bush and other fortunate sons got into National Guard while working-class sons died in Vietnam. We can’t ignore the basic unfairness of Wall Street executives paying themselves bonuses with our bailout money while millions of others can’t find jobs. And it does not warm my heart to know that part of my school taxes are paying for Sandy Kress to send his kids to private school where they don’t have to take his tests that my kids do.

This won’t change soon. Rick Perry regularly appoints Kress to advisory boards and allows him to testify before the legislature as if he’s only representing a state board and not his testing company lobbying client. I am Kress fallen that Sandy is making money off my children while protecting his own from the STAAR test, but it’s only offensive, not illegal. His transgression is a moral one, akin to selling sugary soda to kids while forbidding his own from rotting their teeth out. He has a classic conflict of interest between his kids and mine.

All this began with such good intentions, to end social promotion by not leaving any child behind in a failing school. But Kress has led us to hell by insisting that testing our children will make them smarter. Of course it doesn’t work that way any more than marking off their growth against a wall makes them taller. That’s why Kress sends his kids to a private school with our money while our kids forgo a real education so they can take his tests.

If Kress really believed that his tests made schools better, he’d send his own kids there. And if he knows better, he’d stop selling Texas tests that we can’t afford and that school districts increasingly don’t want.
—–
© Copyright 2012 Jason Stanford, distributed exclusively by Cagle Cartoons newspaper syndicate.
Jason Stanford is a Democratic consultant who has helped elect or re-elect more than two dozen Members of Congress. He lives in Austin, Texas. You can reach him at stanford@oppresearch.com or follow him on Twitter @jasstanford.

Posted by Angela Valenzuela at 1:45 PM