PHILADELPHIA (AP) — Ten thousand unused musical instruments. No sports or art programs. No assistant principals, counselors, cafeteria aides or secretaries.
That's what the Philadelphia public schools will look like in September without a major cash infusion. And while the devastating consequences of the district's $304 million deficit have been widely reported for weeks, parent Mike Mullins thought people still didn't get it.
So for the past eight days, he's been on a hunger strike.
"What led us here was the catastrophic budget they put out which devastates the schools and our city, but specifically eliminates — just completely abandons — all of the safety monitors in lunchrooms and in recess," Mullins said Monday.
The "Fast for Safe Schools" is one of several efforts designed to draw attention to the schools' dire situation. The district has sent layoff notices to 20 percent of its staff, meaning more than 3,800 employees will be jobless next week.
Democratic city officials have been furiously negotiating for more money with lawmakers in Harrisburg ahead of the June 30 state budget deadline. But Republican Gov. Tom Corbett and leaders of the GOP-controlled Legislature have made no promises. 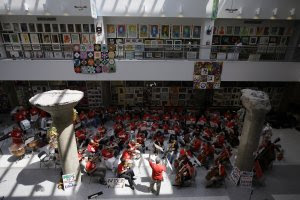 Conductor William Scheible directs a farewell concert with music teachers slated to loose their jobs …
Philadelphia, one of the nation's largest districts, serves about 204,000 traditional and charter school students. It has not been able to keep pace with rising costs and fluctuating state aid despite closing more than 30 schools and cutting hundreds of central office workers.
On Monday, dozens of pink-slipped music teachers joined some of their students for a goodbye concert. The strains of Rimsky-Korsakov, Saint-Saens and medleys of pop songs filled the soaring atrium of district headquarters downtown.
Come fall, students will hear only the sounds of silence, said Virginia Lam, the system's music administrator.
"It's a farewell concert because all 66 instrumental music teachers — who go to 190 schools, service over 10,000 students, present over a thousand concerts each year — their positions have been eliminated," Lam said.
Among the musicians was newly minted high school graduate Jordan Salguero, who comes from the city's rough-and-tumble Kensington neighborhood.
Before the concert, she said music was her lifeline and the only thing that kept her in school. She's heartbroken that her 7-year-old brother, who is learning to play the violin, won't have the same opportunities. 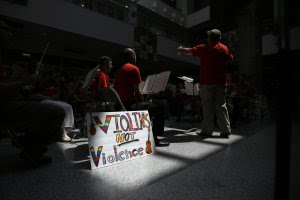 Conductor William Scheible directs a farewell concert with music teachers slated to loose their jobs …
"It's pretty depressing knowing that what I got to do, and what I'm doing right now with cello, he won't be able to do," Salguero said.
Playing with Salguero was Eric Jones, who teaches stringed instruments at six schools in south Philadelphia. The mood in class has been very sad, he said.
"Students were writing letters to the school board, and really heart-wrenching letters about how much they'll be impacted by it," Jones said. "I was surprised, even, how deeply they felt it."
The state-run School Reform Commission, which oversees the district, has asked the city for $60 million, the state for $120 million and unions for about $130 million in concessions. The additional funds would allow some programs and jobs to be restored.
Earlier this month, City Council pledged to deliver $74 million to the schools through a new tobacco levy and increased delinquent tax collections. But the cigarette tax requires enabling legislation from the state, and collecting overdue taxes has never been the city's strong suit.
The governor is pushing heavily for union concessions, including freezing salaries through 2017, increasing the length of the work day and asking employees to pay for part of their health insurance. 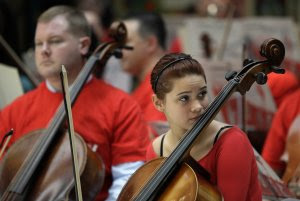 Cellist and recent graduate Jordan Salguero, right, waits to play in a farewell concert with music t …
Teachers union president Jerry Jordan has said that his members have already sacrificed enough.
Meanwhile, hunger strikers who are only drinking water remain camped out in front of the governor's field office in downtown Philadelphia. The fast was organized by Unite Here, a labor union that represents 1,200 noontime aides who are being laid off.
Mullins was among two parents and two school cafeteria workers who began the strike June 17, saying the aides play a critical safety role by stopping bullying, de-escalating violence and defusing tensions in the lunchroom.
Eight days later, three of the original four are ending their fasts. But they've passed the torch to a new group that includes union member Nicole Hunt, who said she was moved to act "because I'm angry."
"I thought education was supposed to be about the kids," said Hunt. "It's not about the kids anymore. I don't know what it's about. But school should be school, and kids should feel safe."
___
Follow Kathy Matheson at www.twitter.com/kmatheson
Posted by Angela Valenzuela at 6:10 PM