A Boycott Today Keeps the Testing at Bay 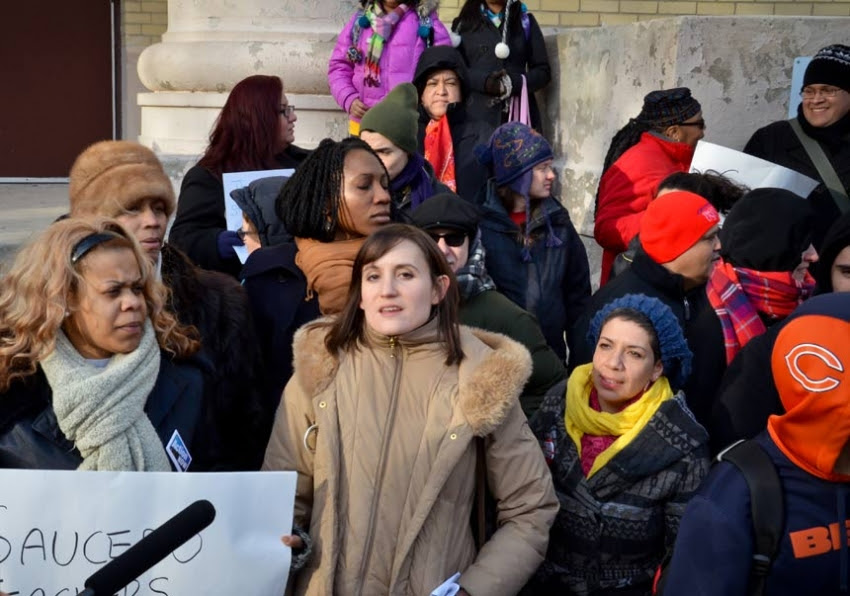 A Boycott Today Keeps the Testing at Bay

A model Chicago alliance of teachers, students and parents is leading the way in a nationwide testing refusal movement

Chicago teachers say they believe their boycott was the right thing to do—but they faced a significant backlash for their actions.

In school years past, the advent of spring has meant that it’s time for Chicago elementary school students to sit through two weeks of state-mandated standardized testing. But this March, something different happened: Thanks to the efforts of a group of pro-public education, anti-testing activists, a boycott of the Illinois Standards Achievement Test (ISAT) took hold across the city.

More Than a Score, a coalition of parents, students and teachers organizing against testing, has long urged parents to take advantage of their rights to opt children out of unnecessary standardized tests. The group says that by the time testing day rolled around this year, parents in more than 60 schools sent in letters withdrawing their children from participation in the exam. Their reasons? The numerous tests cause undue stress on students and are an inaccurate and unfair form of evaluation. This is typical of the mounting opposition to the explosion over the past decade of what’s known as “high-stakes testing”— tests that can determine such important decisions as whether a student will pass to the next grade.

But what made national headlines was the refusal of teachers at two Chicago public schools to administer the ISAT. They stood firm in spite of threats from administrators that they could lose their licenses or face other disciplinary action. Along with their desire to support parents and students opting out, the teachers had their own reasons to oppose the tests. A central grievance during the teachers strike in September 2012 was the use of test scores to evaluate teachers, regardless of whether their students faced external obstacles to scoring well (such as language barriers). Educators were also adamant that the ISAT took away valuable teaching time.

The testing boycott took off February 25 when, amid news reports highlighting growing interest from parents in opting out, teachers at Maria Saucedo

Scholastic Academy voted unanimously not to administer the ISAT. By testing week, a majority of teachers at another school, Thomas Drummond Elementary, had also voted against administering the test.
With their refusal, Chicago teachers followed in the footsteps of their counterparts at Seattle’s Garfield High School, who led a first-of-it-kind boycott of the Measures of Academic Progress (MAP) exam last year. These actions have lent momentum to a nationwide wave of opposition to standardized testing.
On April 12, for example, a majority of teachers in the Colorado Education Association union voted during their annual meeting in favor of a moratorium on high-stakes testing. Anger against testing has also been bubbling over in New York State, where anti-testing groups say that more than 34,000 students have thus far opted out of taking this year’s English Language Arts assessment (ELA) test, given to grades three through eight under the new Common Core Learning Standards. On April 4, hundreds of parents, students and teachers marched in Brooklyn against the ELA.
Julie Woestehoff, executive director of Parents United for Responsible Education, a Chicago-based parent group, says that such actions are being driven by frustration with the multiplying numbers of tests students are required to take. “The testing has really exploded. There is the phase-out of old tests, the phase-in of new tests,” she says. “You even give [students] pre-tests to see how they will do on the test.”
Indeed, in Florida, often considered a model for other states’ testing regimes, school districts are required to administer as many as 62 tests per year to their students. The growth of testing impacts younger students as well—kindergarteners in some states have been expected to take multiple-choice tests, though teachers contend they barely have the coordination skills to hold a pencil.
Testing is no longer used simply to evaluate students either: The education reform movement that has swept through America’s school system emphasizes the validity of testing to assess teachers, schools and even districts. High test scores, critics say, correlate more closely with higher levels of school resources than any other factor, but low scores nevertheless come with a bevy of consequences, often impacting students of color attending cash-strapped public schools most acutely.
In Chicago, New York and New Orleans, test scores have been used to justify school closures and turnarounds. And because school funding often depends in part on test results, particularly under No Child Left Behind rules, it can result in further under-resourced schools or school districts.
Chicago teachers say they believe their boycott was the right thing to do—but they faced a significant backlash for their actions. The school district responded with a flurry of emails and robocalls to parents, listing the virtues of the ISAT. Saucedo teachers also received emails from their principal and Chicago Public Schools CEO Barbara Byrd-Bennett warning they would be “disciplined” and could have their teaching licenses revoked.
Whether Chicago teachers will actually face reprisals for their actions is still uncertain. CPS officials have said they are investigating “teacher misconduct” in the lead-up to the ISAT boycott as well as on the testing days, and have interviewed teachers at both Saucedo and Drummond. Parents from Drummond had their own allegations of misconduct against CPS lawyers, who they say interviewed students without parental approval.
CPS told In These Times they were not able to give any details of the ongoing investigation.
Many eyes nationwide will be watching to see how the Chicago teachers weather the blowback, as the battle over testing appears poised to escalate. The nationwide transition to Common Core State Standards, a set of new education standards pioneered by the Obama administration and expected to be in place in most states at the start of the next school year, is likely to further fuel the testing explosion, says PURE’s Woestehoff. Common Core will impose new assessments with higher standards, increasing pressure on students and teachers, she says.
While it may look like a big tent is forming against Common Core—conservative talk shows hosts such as Glenn Beck, along with legislators in red states have pushed back against the educational benchmarks set rigidly at the federal level—Woestehoff sees Chicago’s opposition movement as not primarily targeting Common Core, but rather the overall testing regime.
Sarah Chambers, a boycotting teacher and a leader in the Chicago Teachers Union, is confident that the testing refusal movement is “gaining speed” nationwide. “I fully believe in the upcoming years there are going to be massive boycotts of testing around the country,” she says.

Yana Kunichoff is a Chicago-based journalist covering immigration, labor, housing and social movements. Her work has appeared in the Chicago Reporter, Truthout and the American Independent, among others. She can be reached at yanakunichoff at gmail.com.

Posted by Angela Valenzuela at 10:00 PM