An exodus from Central America tests the U.S.

The jump in Central American kids is clearly astronomical—but the literally thousands upon thousands of unaccompanied minors from Mexico throughout this time period is staggering. I'm learning from other sources that the Mexican children are simply deported while the Central American children appear to have a better, albeit uncertain chance, of remaining in the U.S. This piece further underscores the profitability in trafficking in children that the drug cartels have seized upon.


Flight of the Children

from TIME Magazine,
6/19/14:
An exodus from Central America tests the U.S. 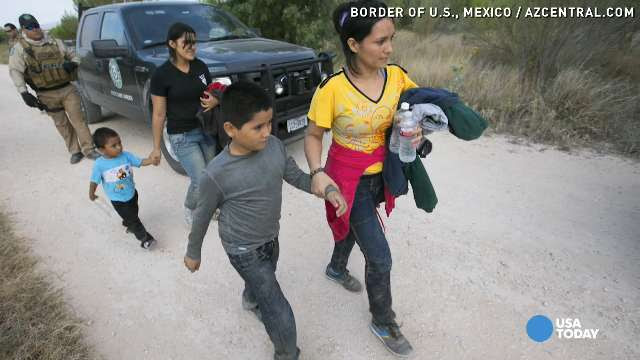 For the smugglers on the Southern border of the U.S., children are easier and more profitable cargo than grownups. Unlike adults, kids don’t need to evade authorities after they cross the Rio Grande. When they get caught, many are quickly sent to live with relatives already in the U.S. while the courts spend years processing their deportation.
And so in recent weeks the Obama Administration has found itself in a bizarre public relations battle with criminal cartels in Central America, which are enjoying a banner year by charging as much as $8,000 for each child they transport north. Over the past eight months, 34,611 unaccompanied children from Honduras, Guatemala and El Salvador have been detained at the U.S. border, more than 10 times the 3,304 figure from those countries in 2009.
The White House believes the cartels are selling false tales of citizenship to vulnerable populations, and aides to California Senator Dianne Feinstein claim to have uncovered evidence of deceptive radio ads promising a safe haven in the U.S. So the State Department has launched its own publicity campaign, and Vice President Joe Biden added a stop in Guatemala after his World Cup tour of Brazil. “We are doing everything we can to make sure that the message is abundantly clear,” says Cecilia Muñoz, the domestic-policy adviser at the White House. At every step, U.S. officials note that proposed immigration reform and recent Executive Orders by President Obama will offer no new sanctuary.
But that message may not matter, given the ample evidence that gaining citizenship is far less of a concern for many of the boys and girls than simply finding safety. For years, those three countries have been consumed by increasing violence by organized gangs, which have grown in power on the back of the drug trade as economic conditions worsen.
Interviews with those captured in the U.S. confirm these horror stories: in one survey, 66% of Salvadoran children, 44% of Honduran children and 20% of Guatemalan children cited criminal violence as their reason for leaving. Nor is the U.S. their only destination. Preliminary statistics from the U.N. find that requests for asylum from the same three countries to nearby Central American nations like Nicaragua, Mexico and Belize increased roughly sevenfold from 2008 to 2013.
If so, the U.S. is unprepared to receive the next round. Obama has opened three military bases to house the arriving children, taking pressure off the overwhelmed shelters, and the Justice Department is trying to round up pro bono lawyers to represent them. Americans are discovering anew the price of failing states in their own backyard.

Posted by Angela Valenzuela at 6:41 PM