Grandkids of Latino immigrants are less educated than their parents. Blame assimilation.

Important read on the problems that many of us scholars know to exist with respect to this grand ol' experiment of assimilation.
-Angela

As a family settles in the United States over a generation or two, it gets more assimilated. That's just as true for immigrants today as it was for immigrants a century ago (if not more so).
But assimilation has a dark side. These charts from the Urban Institute show that while second-generation Latinos (the children of immigrants) are more educated than their parents, third-generation Latinos (the grandchildren of immigrants) are less educated than their parents:

(Urban Institute)
It's not just education, either. The Urban Institute's 2014 report on immigrant youth points out that this Latino "U-turn" is a broad problem:


After progress from first to second generation, there are retreats in outcomes, such as voter participation, school attendance, educational attainment, trust in institutions, trust and interchanges with neighbors, and disconnectedness from work and school.[...] Most third-generation youth who identify as Latino are doing poorly in many indicators of well-being compared with nonimmigrants and second-generation Latinos.

Other research shows that the dark side of assimilation persists across ethnicities. According to a 2013 study in the journal Crime and Delinquency as explained on the Pew Research Center's blog, second-generation immigrants (the best-educated generation of Latinos in the Urban study) are much more likely to commit crimes than their parents. While foreign-born Americans have a strikingly low crime rate, their children — second-generation immigrants — just regress toward the mean.

(Pew Research Center)
That chart makes it clear that becoming more "American" isn't always a good thing. It's important to think about the society that immigrants are being assimilated into. As the Urban report notes, in an unequal America, lower-income immigrants (especially lower-income Latino immigrants) are being assimilated into what researchers have called the "urban underclass" — where their children are at a disadvantage.
But there's an interesting possibility which might explain some of the "U-turn" in the Urban report: not all third-generation immigrants still identify as Latino at all. It's possible that more-successful third-generation children are more likely to identify as white, while less-successful ones are more likely to consider themselves Latino. The question of how or whether Latinos will fully assimilate is key as the community continues to grow and establish itself as a force in American politics and society — and if Latino identity becomes something that only the least successful Latinos hold on to, that could pose a real threat to the group's growing electoral and social power.

Who are the immigrants currently in the United States?

As of 2011, roughly 40 million immigrants lived in the United States, according to the American Community Survey. The survey defines immigrant as any US resident who was born in another country.
Of that group, 36 percent were naturalized citizens, 32 percent were legal permanent residents, 4.2 percent were on nonimmigrant visas (including work and student visas), and 27 percent were unauthorized immigrants. That's according to research from the Migration Policy Institute and the Pew Hispanic Trends Project. 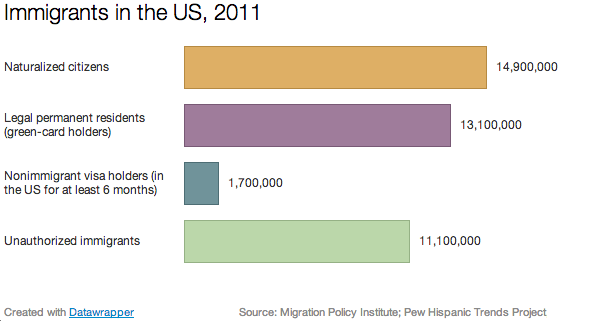 A little more than one-quarter of all current US immigrants come from Mexico. Another one-quarter come from South and East Asia. The Caribbean, Central America, and South America each contribute between 5 to 10 percent of the US immigrant population.
The basics of the US immigration system 21 Cards / Edited By Dara Lind Updated Sep 3, 2014, 2:33p
Posted by Angela Valenzuela at 8:07 PM

Email ThisBlogThis!Share to TwitterShare to FacebookShare to Pinterest
Labels: assimilation