Obamacare repeal is based on racial resentment 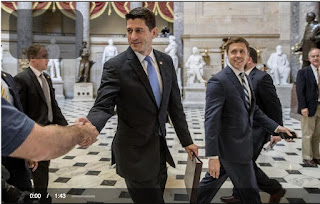 House republicans are taking health services away from disabled children, women who give birth, and survivors of rape and sexual assault. They are consigning thousands of people with serious illnesses to death by making them uninsurable in an era of unaffordable treatment. Virtually every reputable medical organization in the country condemns the health care bill that passed the house Thursday, but the GOP clings to two reasons for passing it.
First, republicans claim that the new legislation provides economic benefits. These benefits are unclear, though reports suggest that they entail a transfer of resources from vulnerable people to rich people. The bill passed the house without a score from the congressional budget office, so we can dismiss any economic justification for it without further discussion. Passing the bill without a score from the CBO is a signal that republican legislators are not taking the economic dimensions of this issue seriously, so we can follow their lead and move on to the heart of the matter.
The other explanation given by house republicans for passing the bill is political. These congressmen felt they had to repeal the affordable care act because they promised to do so. Most Americans have no quibble with Obamacare itself, but for republicans, repealing it is and always has always been a way to repudiate former president Barack Obama. Since taking office, president trump has done several things that he previously chastised Obama for, but these contradictions have had little impact on his party or their supporters. This is largely because GOP voters’ disdain for Obama and support for trump cannot be separated from findings about racism. Studies conducted after the election confirm that racial resentment directed toward people of color predicted both overall support for trump and voters’ propensity to switch from Obama to trump.
GOP voters know they don’t like Obama, but they do not know Obama’s legislative record, whether it pertains to the economic recovery or health care legislation. A December 2016 poll showed that 67 percent of Trump voters believed that unemployment had risen during Obama’s tenure, even though it dramatically declined. A February 2017 poll found that one third of all Americans did not even know that Obamacare and the Affordable Care Act were the same thing. Over half of the Republicans in that poll did not know whether Medicaid would be impacted by repealing Obamacare. Medicaid will be gutted by the new bill.
So the naked truth is that racial resentment directed toward Obama set off a chain of events that will likely cause 20 million people to lose their health insurance and ignite a public health crisis of unimaginable consequence. Some time ago, I wrote about one of the myths of white supremacy: the idea that its ill effects are limited to targeted groups. I explained, “What white supremacy does, eventually, is normalize and spread the abuse, trauma, and destruction initially prescribed for targeted groups.” The damage prescribed by hateful ideologies is most severe within targeted groups, but it is never contained.
Financially secure people who criminalize and denigrate poor people for being born poor do not understand the threat that poverty poses to their own health. Those who hate and traumatize women and LGBT people do not understand how sick their idea of manhood is, and the threat that such toxic masculinity poses to their own health. Those who dehumanize people of color and people who worship different gods do not understand that ethnic cleansing is never complete. It requires the constant conjuring of new witches to hunt and more wood for the pyre, starting a fire that burns down the whole village.
Perhaps this legislative catastrophe will result in new understanding about the infectious capacity and true danger of racism, sexism, and the unmoored pursuit of profit. Disease, gruesome suffering, and undignified death are powerful forces that can redraw moral lines. But hoping for this moral awakening — for the authors of this bill and their colleagues in the Senate to suddenly realize the error of their ways — is a grave mistake. We cannot count on those who literally toast to the death of their constituents to reverse course before or after the legislation is finalized.
House Republicans refuse to be our caretakers, so we must care for each other. We must continue to call our representatives, continue to march, and prepare to vote for our lives in 2018.
Michael P. Jeffries is an associate professor of American studies at Wellesley College and author of three books, most recently, “Behind the Laughs: Community and Inequality in Comedy.”

Posted by Angela Valenzuela at 11:39 AM