BOOK REVIEW Our Sacred Maíz is Our Mother by Dr. Esther Díaz Martín

BOOK REVIEW
Our Sacred Maíz is Our Mother: Indigeneity and Belonging in the Americas
The University of Arizona Press, 2014 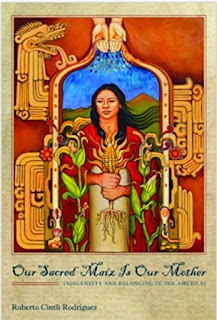 Our Sacred Maíz is Our Mother: Indigeneity and Belonging in the Americas represents Roberto Cintli Rodriguez’s understanding of maíz culture, which largely influenced the design of the Mexican American Studies curriculum and pedagogy at the Tucson Unified School District in recent years. Despite its record of success in graduating 97.5% of its high school students and a 70% college continuation rate, the MAS program was recently dismantled by Arizona House Bill 2281 which, it must be noted, came at the heels of Senate Bill 1070, another anti-Mexican and anti-immigrant measure which, among other trespasses, required children to identify the immigration status of their parents and permitted law enforcement to question people about their citizenship based on “reasonable suspicion.” It is in this political context that Our Sacred Maíz, is published, making this text a necessary read in order to understand the epistemological underpinnings of Ethnic studies at TUSD and the ideological conflicts that inspired such an unsympathetic response to the MAS curriculum from right-wing politicians.


In sum, Our Sacred Maíz outlines Rodriguez’s understanding of indigeneity in the Americas, paying special importance to la gente de maíz, that is, a people united by a seven thousand year-old story that begins with the domestication of corn in Southern Mexico. It highlights the continuity and resilience of maíz culture against colonialist discourses that discount the lives of indigenous and what Rodriguez understands as the ‘deindigenized people’ in the Americas—people who have been denied their culture, kinship, ceremony, story, narratives, and from recognizing themselves as indigenous. The continuity of maiz culture is found in Mixtec and Nahuatl codices, colonial era cantos and cantares, nineteenth-century maps of Aztlán, oral traditions, paintings, murals, sculpture, poetry, song, theater, ceremony, danza, the tamalada, tortillas, and even in tortilla packaging iconography in the US.


The core of the book centers on three sets of narratives: the centeotzintli narratives, “used by Mexican and Central American peoples, including Chicanos/Chicanas, to assert a sense of belonging to this continent”; Aztlán resistance narratives, “which argue that Mexican people are not simply Indigenous to the continent, [but] are also Indigenous to what is today the U.S. Southwest”; and a dominant ‘master narrative’ that locates Mexicans and Central Americans as alien, suspect, illegitimate, and subservient in US society. Each of the six chapters focuses on conflicts between European efforts to colonize the Americas, as well as indigenous and de-indigenized people's resistance and survival.


First, Rodriguez examines the forceful imposition of Christianity by Spanish colonial forces through the retooling of indigenous sacred iconography in an effort to eradicate indigenous spirituality. The most famous example is the reworking of the figure of Tonanzin as La Virgen de Guadalupe. Rodriguez disputes common justifications within the master narrative that account for the extreme violence of European colonization of the Americas. For instance, the explanation of the demise of indigenous populations is frequently attributed to disease and poor immune systems “as opposed to conditions of war, famine, starvation, brutality, and exploitation.” The negative stereotypes of indigenous people formulated by Spanish priests in the 1500s and continued by Euro-Americans, argues Rodriguez, is continued today by anti-Central American and anti- Mexican rhetoric "that views Indigenous people from the south as aliens in the United States.”


Central to this position is the claim that, “Chicanas/Chicanos and Mexicans and Central Americans in the United States are not merely descendants of Indigenous people but Indigenous people themselves.” The author defends a fluid and evolving indigenous identity and opposes scholars who brush-off indigeneity "as [a] romanticized or culturally nationalistic history, or as applying only to Mexico's culturally isolated populations.” Calling for a more radical decentering of the European and Western-centered narratives, Rodriguez refuses to position maíz-centered narratives as ‘counternarratives.’ Instead, he argues that centeotlzintli narratives, "can be seen as an antithesis to the Western master narrative of history... for [they predate] the western narrative on this continent... a continent that does not figure meaningfully into Euro- American timeline until 1492.” Rodriguez insists that his arguments here should not be called “revisionist,” but rather “an acknowledgment of an ancient narrative that is documented in both ancient codices and the living and dynamic oral traditions of maíz based peoples.” This position refuses to engage in the ‘civilizational war’ that state of Arizona representatives wish to portray as the objective of MAS-TUSD curriculum.


Rodriguez states, “What we want is to end these contrived wars-on the basis of mutual respect—not win them.” The Aztlán resistance narratives argue for the rightful belonging of Mexican people in the U.S. Southwest.


They are found in nineteenth-century archives and twentieth-century metaphors that read Aztlán as a “hidden script” that also contains “a narrative about unity of the continent based on maíz” which resonates with deindigenized people of the Americas functioning as a “belonging story.” To support this claim, Rodriguez looks at El Plan Espiritual de Aztlan (Alurista 1970) as a declaration of political and cultural insurrection for Chicanas and Chicanos and as a proclamation of “Indigeneity to lands in which Mexicans had traditionally been framed by the U.S. master narrative as aliens and unwanted strangers.” Yet, contemporary Mesoamerican cultural expressions of maíz, such as oral histories, iconography of the Chicana/Chicano movement, festive meals and ceremonies, danza traditions, and Teatro Campesino’s Theater of the Sphere, demonstrate that the very efforts to erase maíz-based culture only serve to make its messages more amenable to those treated as alien in the US.


This proclamation of belonging is also found in the tortilla. Rodriguez posits the tortilla in a visual culture war counterposed with white bread in “the quintessential civilization binary: corn versus wheat, round versus rectangular.” Through the examination of tortilla package iconography from examples collected in US stores in the Midwest and the Southwest, Rodriguez concludes that the tortilla serves as a site where memory, culture, and place are stored. This discussion introduces a compelling question as to the possible outcomes of the production of genetically modified seeds and industrial style farming to the wholesomeness of the round tortilla and consequently, to la gente de maíz.


In closing, Rodriguez asks why the narratives of the continent enclosed within indigenous images, signs, and symbols remain unrecognizable to modern day de-indigenized Mexicans and Central Americans in the US. He proposes a research path that inquires if and how newly deciphered maíz culture symbols will be recognized by de-indigenized peoples as things of their ancestors or as a culture of their own. This question compels scholars to continue charting maíz stories and to continue thinking about “how maíz-based people use corn for the purposes of identity formation, how it is used to confer legitimacy, and how stories also communicate a sense of belonging.”
Posted by Angela Valenzuela at 2:22 PM