Push to increase the number of teachers of color in California classrooms gains momentum: Initiatives underway to increase diversity among California teachers

This article is evidence-based with respect to the importance of teachers' race and ethnicity in terms of how it matters significantly for students' lives at the classroom level, impacting positively the achievement gap.  This focus in California on the recruitment and retention of teachers of color needs to happen everywhere. 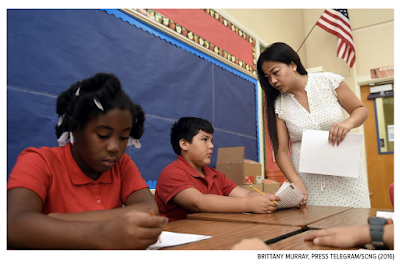 Increasing the number of teachers of color in California classrooms has been a top priority for State Superintendent of Public Instruction Tony Thurmond since he started the job in January. Now, he’s planning a statewide task force focused on improving teacher diversity in California schools.
“The data shows when kids see a teacher who looks like them it makes a huge difference,” Thurmond said in an earlier EdSource interview.
Hiring a diverse group of teachers can help students academically and provide role models for their future, research has revealed.
Thurmond already has assembled an advisory group focused on closing the persistent achievement gap between students of color and their white and Asian peers.
Research shows a strong association between poverty and students’ lack of success on achievement tests. And while poverty is not unique to any ethnicity, it does exist in disproportionate rates among African-Americans and Hispanics, and among English learners.
Having more teachers with diverse backgrounds in the classroom has a positive impact on learning for students of color and for closing achievement gaps, according to a study from the Learning Policy Institute. Students of color generally have higher test scores, are more likely to graduate from college and to succeed in college when they have teachers of color in the classroom they can look to as role models.
But this doesn’t happen often enough. Fewer than 4 percent of teachers in California were African-American and 20.7 percent were Latino, while 5.4 percent of the state’s students were African-American and 54.2 percent were Latino in 2017-18, according to data from the California Department of Education. About a quarter of the state’s teachers are male.
A survey of participants of a virtual town hall on the achievement gap, hosted by the Department of Education in Sacramento in September, found that an overwhelming majority agreed that getting more teachers with diverse ethnic and racial backgrounds into classrooms is essential to reducing the achievement gap. 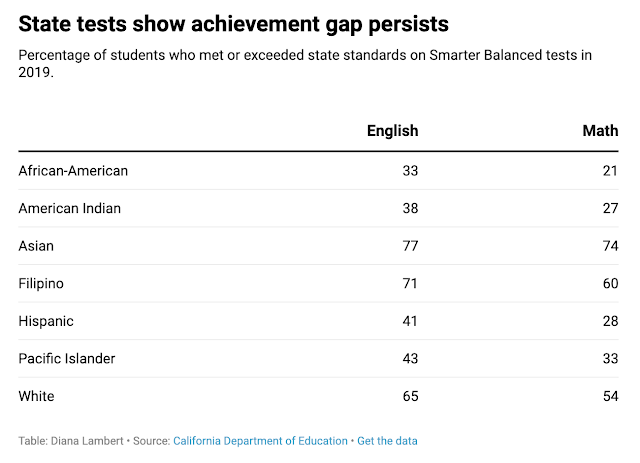 The Closing the Achievement Gap Initiative has come to much the same conclusion. The group is led by four co-chairs: Manufou Liaiga Anoa’i, a school board member with the Jefferson Elementary School District in Daly City; Ryan Smith, chief external officer for the Partnership for Los Angeles Schools, a nonprofit that runs 18 schools within Los Angeles Unified; Roseann Torres, CEO of Torres Law Group and a board member in the Oakland Unified School District; and Elisha Smith Arrillaga, executive director of The Education Trust-West, a nonprofit organization focused on closing the achievement gap.

At least 100 people across the state have been working with the initiative, which launched in February. Diversifying the teacher workforce is a large part of their discussion, Smith said.
“We see recruitment and retention of teachers of color to be key to improving the outcomes of marginalized students,” he said.
Smith said the most impactful teacher he had growing up was another African-American male who told him he could do anything and that there would be obstacles, but that he believed in him.
“What I see is that when students see themselves in the educator we put in front of them and when the educator can speak to the experiences of the student and understand the culture that the student resides in and they understand the challenges of being a person of color, there is a connection there that is important,” Smith said.
The California Department of Education defines teachers of color as all teachers who are not white, said Scott Roark, a spokesman for the department.
Thurmond and the California Department of Education also want to identify effective strategies of school districts that have successfully been able to recruit and retain teachers of color, according to Smith. They want to work with advocacy groups to raise awareness about the need for those teachers and to spotlight universities that have effectively increased the number of students of color who go on to become teachers.
San Diego State University recently started a program aimed at increasing the number of Latino and bilingual teachers in California. Beginning next year the university will accept 100 students from local colleges into its bilingual credentials program, which prepares teachers to teach in bilingual K-12 classrooms. The program, which is supported by a $3.7 million grant from the U.S. Department of Education, will offer students a stipend.
That effort will be ratcheted up when a task force focusing on increasing teacher diversity in California classrooms begins its work. The California Department of Education is in the early stages of putting the task force together and no timelines have been set, according to Roark. The task force will work closely with CSU Northridge, which has a program focusing on preparing men of color to become teachers.
In the meantime, the Closing the Achievement Gap Initiative will continue to meet monthly and conduct virtual town halls, surveys and regional meetings with stakeholders across the state.
Although the group’s recommendations to close the achievement gap won’t be completed until early next year, a report released in September by The Education Trust and Teach Plus, a nonprofit organization that trains teachers for leadership roles, may offer some insight into what is needed to retain black and Latino teachers.
The report, “If you listen we will stay: Why teachers of color leave and how to disrupt teacher turnover,” is primarily based on interviews with administrators and teachers who identify as African-American or Latino, from California, Illinois, Indiana, Tennessee and Texas.
The report offered four recommendations to state leaders to help recruit and retain African-American and Latino teachers:
The teachers who were interviewed said they often experience an antagonistic school culture and feel undervalued and disconnected from the curriculum being taught. They would like to be allowed to teach in more creative and meaningful ways because students aren’t always represented in the curriculum or in classroom materials, according to the report.
The teachers said they want to work in an environment where they can impact students beyond test scores and allow them to graduate with a strong racial identity. They tend to stay at schools where there are strong relationships among staff and a commitment to equity, social justice and the dismantling of racism, according to the study.
“Recruiting teachers of color only gets them into the building,” according to the report. “We must pay equal, if not more, attention to their retention to make a long-lasting change in the diversity of the workforce.”

Posted by Angela Valenzuela at 2:32 PM