The Children’s Defense Fund of Texas and the Texas Pediatric Society have just put out this press release that makes a strong case against cancelling DACA.  Reach out to whoever represents you to let them know just how traumatic ending DACA will be to recipients' children.  -Angela

Washington, DC - At least a quarter of a million young children—including 46,700 in Texas—would be harmed developmentally, psychologically, and economically by the cancellation of Deferred Action for Childhood Arrivals (DACA). The Trump administration failed to consider their interests when repealing the program in 2017. 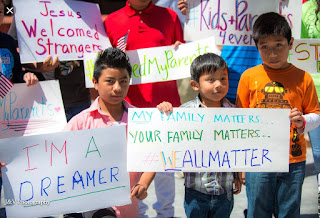 On Friday, Children’s Defense Fund, TX and Texas Pediatric Society joined nearly three dozen other organizations and leaders in filing an amicus brief (appendix here) with the U.S. Supreme Court, asking the court to consider the impact of rescinding DACA on beneficiaries’ children, who are U.S. citizens. Oral arguments are scheduled for November 12, 2019.

The DACA case affects children and families in every state, but Texas is home to one of the largest numbers. More quotes from national and state leaders can be found here.

As the brief explains, society has a moral imperative to protect children from harm; this imperative is recognized in numerous laws and policies, including the Family First Prevention Services Act of 2018. Failing to consider the needs of these children puts their futures in jeopardy, to the obvious detriment of the communities in which they live.

The “friend of the court” brief states: “The imminent threat of losing DACA protection places children at risk of losing parental nurturance, as well losing income, food security, housing, access to health care, educational opportunities, and the sense of safety and security that is the foundation of healthy child development.”

Patrick Bresette, Executive Director of Children's Defense Fund - Texas, said: "As an organization dedicated to the health and wellbeing of all children in Texas, we are alarmed at the devastating harm that rescinding DACA would cause. We work every day to help families connect their children to affordable health coverage and many of those families include DACA parents. In communities across our state nearly 50,000 children are in such households. We should be doing everything we can to support and protect these young families, not threatening their futures."

In the amicus brief, Texas Pediatric Society wrote: “TPS agrees with the AAP that the future prosperity and well-being of the United States depends on the health and vitality of all of its children, without exception. TPS has consistently and firmly stated that children who are citizens should not be subjected to the separation, or fear of separation from non-citizen parents or their caregivers.”

The brief was co-authored by Persyn Law & Policy and Orrick, Herrington & Sutcliffe LLP for the American Professional Society on the Abuse of Children, the American Academy of Pediatrics, the Center for Law and Social Policy, and other children’s advocacy organizations, medical professionals, and child development experts.

Kyle Yasuda, MD, FAAP and President of the American Academy of Pediatrics said: “Rescinding the Deferred Action for Childhood Arrivals (DACA) policy would have multi-generational health consequences; it not only impacts the DACA recipients themselves, but also their children. When children live in fear of their family being separated, it can have detrimental effects on their health and development, both in the short- and long-term. As pediatricians, we know children fare best when they can grow up in supportive families and thrive.”

Olivia Golden, Executive Director of the Center for Law and Social Policy (CLASP), said: "CLASP recognizes the critical role the DACA program has played in pulling entire families out of poverty and promoting the healthy development of children. We also know from our 2018 research report that harmful immigration policies—like the Administration’s decision to terminate the DACA program—are subjecting young children to fear, instability, and reduced access to critical health and nutrition supports. We urge the Supreme Court to consider what’s at stake for hundreds of thousands of our youngest citizens and the future of our country should the DACA program be rescinded."

"The American Professional Society on the Abuse of Children gratefully joins many of this nation's leading child advocacy organizations in opposing the needless termination of DACA, a critically important protection afforded to persons who arrived in the United States as children and have made lives and families here in the only home they know. The trauma that is being inflicted on the children of DACA recipients by even the threat of their parents' deportation is cruel and serves no meaningful public policy purpose. Over time, these children and the communities in which they live will suffer greatly from this pointless infliction of harm,” stated David Corwin, President of the APSAC Board; Janet Rosenzweig, Executive Director; and Frank Vandervort, Chair of the Amicus Committee.

Additional data about the economic contributions and family ties of DACA beneficiaries in Texas can be found here.
Posted by Angela Valenzuela at 7:49 PM