TEJANAS AND THE 16th of September by MARTHA P. COTERA

I'm happy to share this brief, powerful history written by independent scholar, Martha P. Cotera, on las Tejanas and how they/we connect to the 16 of September. Our ancestors were definitely warriors, "guerreras," and survivors. Thank you, Martha, for your dedication to our community by both preserving and correcting the historical record. 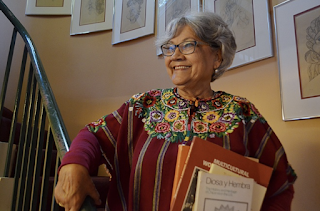 TEJANAS AND THE 16th of September

First of all, let us consider that the 16th of September 1810 is also Texas’ first independence since Texas as Mexican territory was then an important Spanish province with a colonial governor in San Antonio, and active military force. When Father Miguel Hidalgo y Costilla issued the cry for independence  from Spain, Tejanas and Tejanos at the time participated in battles and as supporters of the war effort, at great personal sacrifice and suffering for eleven long years, until Texas, as part of Mexico became independent of Spanish rule in 1821.

Tejanas were active participants in the War for Independence on both sides of the war (less of them siding with the Spanish government) and the majority on the insurgent side fighting for independence. One wealthy woman (who by the way, law or no law had left her husband), Doña Maria Josefa de la Garza pledged to help the suffering Spanish troops of General José Joaquín de Arredondo by donating ten head of cattle to feed his soldiers, and promised to donate the rest of her herd and property in defense of King Fernando VII.

Other Tejanas joined the insurgent troops or simply moved out of harm’s way with their husbands, wherever they had to go during the war, and all suffered tremendously during the battles and afterwards, as their beloved fighting men were shot in the battlefield or executed in the paradon by the Spanish in their presence and in front of their children.

Describing the scene after the Battle of Medina on August 18, 1813, when Spanish General de Arredondo won, the vanquished went to San Antonio, and alerted the populace… “In the din of panic, there was wailing and there were tears, prominent insurgent families and other scurried to leave San Antonio.  Three hundred of them with their belongings were fleeing to Louisiana; rebel families like the Delgados, Arochas and the Leals. Arredondo paraded the streets; he was merciless;  and ordered the soldiers to pursue the fugitives; and to punish La Bahia; he imprisoned hundreds; 327 insurgents were executed in Bexar. He  (Arredondo) set up the infamous “La Quinta” to imprison wives and daughters of the rebels and from  2 am to 10 pm they worked cooking for the Spanish military.  From their windows women saw their children scrounging for food and shelter; they were released 54 days later ; they were destitute, no homes and possessions.”

Also, another Spanish officer, Lt. Colonel Francisco Ignacio Elizondo,  after the battle rode out until he reached the Colorado and riding on the Brazos…”he captured a party of sixteen men, women and children. Four men were shot, then he found the three families, Delgado, Arocha and Leal, the men were shot and taken away from their crying families.” After Elizondo’s death, Colonel Quintero took command and the captives were delivered to Arredondo, he had the males executed and the women were imprisoned in La Quinta along with the women already there.”

After the war,  Tejanas were assertive in filing claims with the Mexican government and demanding pensions based on their husbands’ services.  “Juana Francisca de la Garza, widow of Leonardo de la Garza petitioned for a widow’s pension.  Adriana de Mier, mother of Domingo de Ugartechea received a military pension and payments from his salary.  Maria Catalina de Urrutia, a widow requested her husband’s back pay and a pension.  Maria Luisa de Urteaga also requested a pension.  Women also asked for property reimbursement when it was rented or confiscated; Luisa Gertrudis de la Rua demanded payment of a government debt, and Maria Antonio Ibarvo and her husband petitioned for rent due on buildings occupied by troops, and Maria Nieves Travieso petitioned for the return of a confiscated mule.”

In his moving book, Defending Mexican Valor in Texas, Jose Antonio Navarro mentions two brave women, Juana Leal de Tarin and Concepcion (Consolacion) Leal de Garza, as being survivors of imprisonment at La Quinta.  He says, “they endured their outrageous captivity with spirited courage before yielding to the shameful proposals of their jailers.” (bad translation here! I believe it is meant to say that they never yielded).

In confronting the political instability, Tejanos and Tejanas faced change, and devised diverse survival strategies that had the common goal of seeking to protect families, communities, and a way of life. Tejanas drew on what was familiar when confronted with new situations.  At the same time, they looked to their historical traditions to protect and advance their communities during times of redefinition and uncertainty; they did not always choose the same strategies.

But what really matters is the recognition by both sexes of the empowerment of family and community, and of the urgent need to fight to the death to protect both their spheres, the public and the private; and the ability of both sexes to work successfully and interchangeably in both spheres.

This evidently was the most ingrained and cherished principle of the Tejano experience, and has defined the position of Tejanas in history.  Resistance, reform and activism by Tejanas and Tejanos from the earliest presidio and civilian settlements in the 18th Century  have been characteristic in our expressed desire to preserve and maintain family unity and loyalty.  Our ancestors’ successful preservation, and the mobilization of family-based activism was essential in assuring the success of community goals, and of our survival as Tejanos.

Historically this ideal has been achieved by politicizing of family groups through political familism, involving the participation of the whole family units. As in Tejana and Tejano history, it has focused on the "continuity of family groups and on the adherence to family ideology and the preservation of culture and values  as the basis for the struggle."

Unfortunately the war’s end did not end the trauma, since 3 years later, in 1824, the newly independent Republic of Mexico granted millions of acres of land to Anglo Americans from the United States, and adding insult to injury, allowed these colonials to import slaves into territory that had already abolished slavery. The new Anglo  colonials almost from the beginning began the process of  separating Texas from Mexico, and before long, warfare between Mexico and Texans broke out, lasting until 1836, and ultimately resulting in the recolonization of the Tejano community under the Texas Republic and continuing once Texas was incorporated as part of the United States in 1845.

Posted by Angela Valenzuela at 9:08 PM