Desperate to win, it's abundantly clear that Donald Trump will stop at nothing. The strategy in 2016 to deter them from voting apparently worked to some degree.

Being warned is to be forearmed. 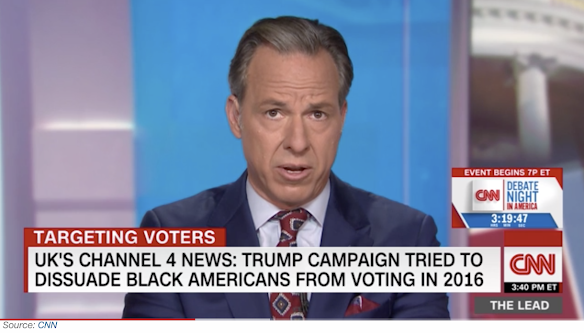 (CNN) In 2016, Donald Trump's campaign targeted 3.5 million Black Americans with negative ads about Hillary Clinton to try and deter them from voting in the last presidential election, according to a new report from the UK's Channel 4 News.

Using a database collected in part by the company Cambridge Analytica, the Trump digital campaign team marked voters in key swing states as "deterrence," or voters they wish to remain at home on Election Day, with African Americans making up a disproportionate amount of those voters, Channel 4 News reported Monday.
CNN has not seen the data obtained by Channel 4 News and cannot verify the findings.
Channel 4 journalist Krishnan Guru-Murthy on Tuesday said while it's "impossible to measure" the impact the alleged deterrence campaign had on the targeted voters, it "revealed the motivations behind what the Trump campaign was trying to do."
"They were trying to deter people from voting, because they knew they couldn't win them over," Guru-Murthy told CNN International's Becky Anderson on Tuesday.
Although there were many reasons Clinton didn't win in 2016, a key factor was that she did not energize enough Black, Latino and younger voters to show up to the polls and win her the White House. She lost traditionally blue-leaning states like Wisconsin, where Clinton was thought to be favored and did not visit the state as the Democratic nominee. Exit polls from 2016 showed a strong distaste for both Trump and Clinton, but voters who expressed negative feelings for both candidates broke in Trump's favor.
Black voters made up 12% of the electorate in 2016 and 89% voted for Clinton over Trump, according to exit polls. According to the Pew Research Center, the black voter turnout rate declined for the first time in 20 years in a presidential election in 2016.
The Trump campaign responded to a CNN inquiry about the Channel 4 report, calling it "fake news" and insisting that Trump "has built a relationship of trust with African American voters" by creating new opportunities and implementing criminal justice reform.
They did not respond to specific questions about the database, which had information on 200 million American voters, according to Channel 4 News.
According to Channel 4, the Trump digital campaign targeted the "deterrence" voters with Facebook ads attacking Clinton, including a video that resurfaced the Democratic nominee's past "super predator" comments. The Trump campaign's tactic of "microtargeting" as described by the Channel 4 News report is legal, and used by other campaigns, political strategy firms and interest groups.
Cambridge Analytica, which shut down operations in 2018, reportedly acquired information on nearly 87 million Facebook users without their knowledge.
Christopher Wylie, a former Cambridge Analytica employee who blew the whistle on its alleged misuse of Facebook data, testified before Congress in 2018 that the company offered services to discourage voting from targeted sections of the American population.
In comments to CNN after the hearing, Wylie alleged that Black Americans were particular targets of Cambridge Analytica's "voter disengagement tactics," which he said were used to "discourage or demobilize certain types of people from voting," and that campaigns and political action committees requested voter suppression from Cambridge Analytica.
Brad Parscale, the Trump campaign's digital director in 2016, told Bloomberg in October 2016 that the campaign was making posts that "only the people we want to see it, see it." The outlet reported that the goal of those posts was "to depress Clinton's vote total. 'We know because we've modeled this,' says the official. 'It will dramatically affect her ability to turn these people out.'"
Parscale later told PBS's "Frontline" in November 2018, "I would say I'm nearly 100 percent sure we did not run any campaigns that targeted ... African Americans, which people think is crazy."
Facebook is facing renewed scrutiny during the 2020 election after its role in the 2016 cycle, including as a tool for Russian meddling in the US election and to spread misinformation.
"Since 2016, elections have changed and so has Facebook -- what happened with Cambridge Analytica couldn't happen today," a Facebook spokesperson said in a statement provided to CNN. "We have 35,000 people working to ensure the integrity of our platform, created a political ads library, and have protected more than 200 elections worldwide. We also have rules prohibiting voter suppression and are running the largest voter information campaign in American history."
Posted by Angela Valenzuela at 2:27 PM