This is a blog about Ethnic Studies for white people who may feel left out of the Ethnic Studies conversation, and that's unfortunate, as we all need to know each others' histories, cultures, and stories. To this end, this is a powerful story published in the Phi Delta Kappan of a social justice curriculum in one such community that I was reminded of at a Kappa Delta Pi Diversity Summit that I attended this morning. I just located this wonderful piece by my dear friend and colleague, Dr. Carl Glickman, that documents the 50-year impact of this social justice curriculum in the Appalachian town of Mountain City in Rabun County, Georgia, otherwise termed, "Foxfire." It's important that we share these stories as they are educative in and of themselves. However, they further illustrate how those of us of all backgrounds have a stake in the Ethnic Studies movement. Enjoy! -Angela Valenzuela #EthnicStudiesNow

Whatever happened to Foxfire? Still glowing? 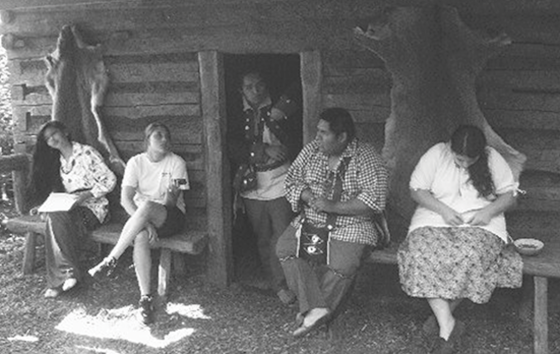 Fifty years later, Foxfire’s practices are often embraced by educators, even if they no longer know its name.

A first-year teacher was frustrated over the behavior of his bored and belligerent high school students, many from the small Appalachian town of Mountain City in Rabun County, Ga. He confronted them about their behavior and asked them what would make English class more interesting. After some discussion, students agreed that they would rather learn the state-required English curriculum of composition, punctuation, and sentence usage through a class project.

Together, the teacher, Eliot Wigginton, and students decided to create a community magazine and call it Foxfire, which was named for the glowing, green fungus found on decaying trees in the adjacent forest. The year was 1966.

What began as one teacher’s pursuit of making learning interesting for one small group of students helped change beliefs about the potential of ordinary students to become deeply involved in school learning. The teacher’s approach put to action John Dewey’s progressive premise that classroom learning should be a form of democratic life in which students actively demonstrate their knowledge and skills by immediately using them to improve society (Wigginton, 1985).

Foxfire was perhaps the best example of this premise for its time. Said researcher Julie Oliver about the school, “Foxfire is distinctive in the history of American education owing to its legacy of  . . . student work outside the classroom. One might argue that Foxfire did this as well as any other pedagogical program for public school students in the history of American education” (Oliver, 2011, p. 125-126.).

The Foxfire magazine was intended to help preserve local Appalachian culture including history, labor, music, crafts, arts, and spiritual and religious beliefs. Students contributed feature articles, interviews, drawings, and photos of neighbors and family members to the magazine. The first magazine sold for 50 cents, and the cost of production was 65 cents. The classroom experiment would soon go broke, but after positive reviews by editors of local and state newspapers, increases in price, and grants from local merchants, the project was saved.

By 1972, the magazine had attracted widespread interest from outsiders who wanted to know more about living on the land, self-sustaining farming, and the pioneer ways of everyday life. That year, students selected their best stories from previous issues and compiled them into what was to become an annual Foxfire book published by Doubleday Press. The first volume made The New York Times best-seller list.

Then came more best-selling books (over 9 million copies sold), a nationally distributed movie, a 32-building Foxfire Museum and Heritage Center on Black Rock Mountain in Georgia, multiple archived collections of Appalachian life, and three decades of courses and workshops on the Foxfire Approach to Teaching and Learning for teacher education students, practicing teachers, and school leaders across the country. Royalties and donations over the years have accounted for more than $1 million in college scholarships to Rabun County high school students, and new scholarships continue to be given every year. Foxfire — both the magazine and the broader part of its work — became a national phenomenon with a well-endowed, nonprofit organization to support its work. But later tumultuous times threatened to wipe out the organization.

Foxfire had an enormous influence on the students in Rabun County, Oliver said. “Foxfire provided . . .  extraordinary opportunities for students to build communication skills. By requiring students to conduct interviews, speak on behalf of Foxfire at various organizations, . . . students were given opportunities that most high school students would never receive in a more conventional curriculum program. . . . Students learned, through their work with Foxfire, to appreciate and better understand the older generations and the past. . . . Students developed a greater appreciation for their native culture and with that developed the confidence that they could carry themselves proudly as mountain people anywhere. The result was that Foxfire students became more productive citizens in our democracy” (Oliver, 2011, p. 208). 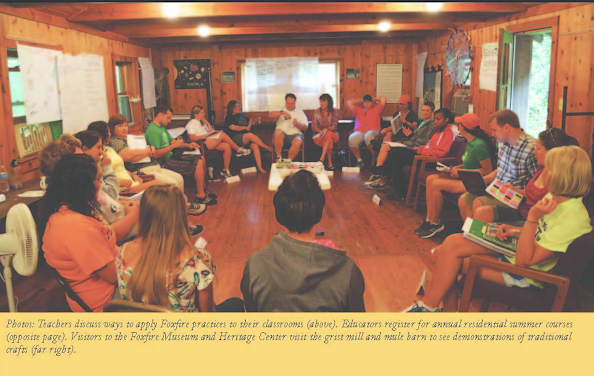 I returned to Black Rock Mountain recently after an absence of more than 20 years and couldn’t help but think about the issues of sustainability in education and whether Foxfire could be judged as a success or failure. In the mid-1980s, I headed a University of Georgia network of public schools called the Georgia League of Professional Schools, which focused on democracy, education, and public purpose (Glickman, 1993). We partnered with Foxfire to provide professional development to K-12 classroom teachers eager to engage their students in learning activities that extended into their communities. That collaboration with Foxfire continued until 1992.

In every education endeavor, unilateral claims of success and failure are highly suspect. Education is a social science, not a hard science of strictly controlled studies, and a major element is the period of time in which the program is evaluated — its first five, 15, 30, or 50 years. I chose the longest term since this year marks Foxfire’s 50th anniversary. So has Foxfire’s approach to education been a success?

As Oliver pointed out, Foxfire clearly benefited many students in Rabun County and continues to do so today. As an outreach effort to influence classrooms and schools throughout the nation, according to teacher survey responses, Foxfire had a major effect on individual classrooms in schools that were members of the Foxfire Regional Networks in the 1980s and 1990s. But today, the name Foxfire is no longer used to describe education practices that support student activity, audience, and service to the community. I reviewed the research on current activity-centered programs that have kinship to the core practices of Foxfire. Those programs have titles such as project-based learning, place-based education, deep learning, academic service learning, experiential learning, and civic learning. These programs boast many examples and studies showing student success in academic achievement, higher interest in learning, lower dropout rates, and progress beyond school in both higher education and professional careers, and greater participation as adult citizens in local and state affairs. Few of them, however, credit Foxfire with showing that these practices could work in real schools.

Can an education approach to learning be successful if nobody uses its name? I think the answer is yes. Foxfire influenced many of the current, progressive education practices. The downside is that these practices have not become as widespread as they should. Educational approaches that promote student engagement and student contribution remain a glaring need for all students. Unfortunately, such experiential, inquiry-oriented learning is often only found in honors classes or in those with gifted students and in schools with a preponderance of students from middle to high socioeconomic backgrounds. The students who need an active and contributory education most are the ones who receive it least (Campaign for the Civic Mission of Schools, 2011; Levinson, 2012; Levine, 2007).

I alluded to tumultuous times with Foxfire. How these difficulties have been navigated is particularly relevant to education and schools and communities of the future.

For many reasons, Foxfire has no business to be still standing and planning for its next 50 years. After Foxfire reached its national iconic stature, Wigginton was named Georgia Teacher of the Year in 1986 and received the MacArthur “genius” award in 1989. But, in 1992, he was indicted for child molestation, pleaded guilty, served prison time, and was ordered out of state, and removed from any further involvement with the program. He was convicted on a single count, but prosecutors contended that his victims numbered many more.

Due to public outrage, Foxfire was nearly disbanded. But current and former students took it upon themselves to post notices on the windows of downtown businesses asking the community to keep the program and museum alive.

It was tough going for many years. A Foxfire board member volunteered his time to negotiate legal settlements, which helped the organization avoid bankruptcy. But then the program encountered other financial problems, which forced former students, staff, community and board members to make difficult cuts in Foxfire’s expenses and to reorganize staff to protect the Foxfire Museum and Heritage Center, the Foxfire class in the local high school, and a different, trimmed-down education program for teachers taken over by nearby Piedmont College. The essence of the Foxfire premise survived (Rechtman, 2015). The local community, students, and Foxfire board and staff never stopped believing in the worth of their students who have made such a difference in preserving the past and countering the negative stereotypes of mountain people.

I surmise that Foxfire, less known nationally as a reform approach to teaching and learning, will remain vibrant in the place it was created. It belongs to the community as an irreplaceable contribution to the world showing the staying power of students, classrooms, and schools partnering with their community to make education a contribution to both. This past October, Foxfire received a 2015 Georgia Governor’s Award for the Arts and Humanities for its sustained contributions to the welfare of schools and communities. It is unrealistic to think that every classroom and school along with its community could replicate what happened over 50 years ago in Rabun County resulting in best-selling journals and books and a vast museum. Yet it is realistic and imperative to expect that students today can apply what they are learning in English, math, science, history, and the arts to making their communities healthier, more caring, economically viable, and aesthetically better places to live. That would be the ultimate success for Foxfire and for our country.

Modified over the years, the Foxfire Core Practices include these:

CARL GLICKMAN (cglick@uga.edu) is university professor emeritus of education, University of Georgia, Athens, Ga. He is a member of the board of the nonprofit Foxfire Fund, Inc. This essay is not an official position or statement of Foxfire Foundation.

Posted by Angela Valenzuela at 4:40 PM