Has the Pandemic Transformed the Office Forever? We all need to have a serious conversation about this.

Friends:
We all have to have a serious conversation about the "postpandemic" meaning of office space and public and private spaces, in general.
This entire read is excellent. You could even go to the New Yorker and listen to it in its entirety while you're exercising.
This has vast implications for the future. We should think creatively. Hopefully, something positive and humane will come out of this.
I do think though that more research has to be done.
Check it out for yourselves.
-Angela Valenzuela 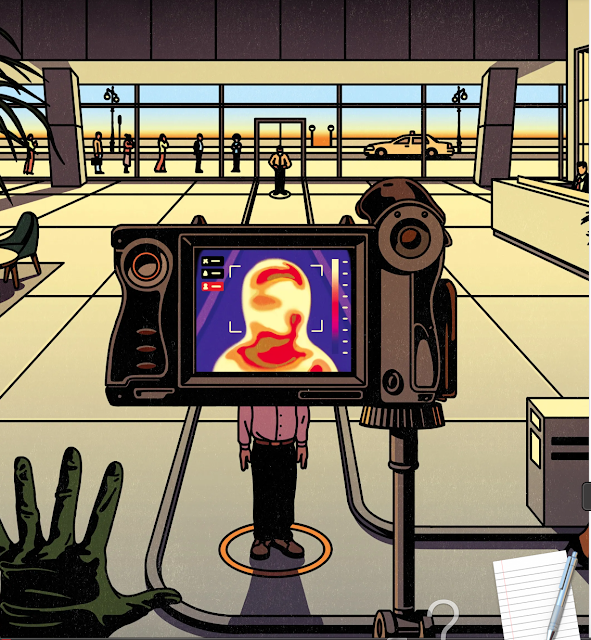 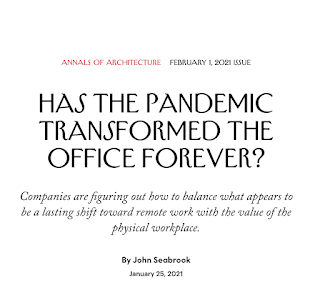 What’s an office for? The COVID-19 pandemic has presented companies with an unprecedented opportunity to rethink the fundamentals of the physical workplace.Illustration by Maxime Mouysset

In the past three decades, a series of quiet revolutions in design have changed the way offices are used, erasing former hierarchies of walls and cubicles and incorporating workplace methodologies from the technology industry into team-based, open-plan layouts. At the same time, digital tools such as e-mail, Excel, Google Docs, video conferencing, virtual whiteboarding, and chat channels like Slack have made a worker’s presence in those offices less essential. The pandemic has collapsed these divergent trends into an existential question: What’s an office for? Is it a place for newbies to learn from experienced colleagues? A way for bosses to oversee shirkers? A platform for collaboration? A source of friends and social life? A respite from the family? A reason to leave the house? It turns out that work, which is what the office was supposed to be for, is possible to do from somewhere else.

The pandemic has presented R/GA and countless other large enterprises with an unprecedented opportunity to rethink the importance of presence, proximity, and place in workspace planning. Twenty-seven per cent of the American workforce will be remote in 2021, according to a recent survey by Upwork, a freelancing marketplace. About twenty million workers have moved—many of them out of major cities—or are planning to. Office vacancies continue to rise: CBRE, the world’s largest commercial-real-estate-services firm, recently estimated a San Francisco vacancy rate of more than sixteen per cent, the highest on record. Major real-estate companies such as Boston Properties and Vornado Realty Trust, which, owing to long-term commercial leases, have traditionally been recession-proof, have lost more than a third of their stock-market value in the past year. Managers—and workers—are struggling to figure out what their post-pandemic offices will look like, and how to balance what appears to be a lasting shift toward remote work with the advantages of the physical workplace.

Before the pandemic, the physical and virtual workspaces often seemed to be at odds. The digital resources that now allow many workers to do their jobs from home had made it possible to come into the office and spend all day online. Although these tools claim to enhance the physical workspace by improving communication, they can undermine office culture by reducing the face-to-face encounters that open-plan layouts purport to promote.

“Digital technology should not be a substitute for human connection,” Microsoft’s C.E.O., Satya Nadella, told me. (It is sometimes, of course, used for precisely that reason in open-plan offices—you can’t concentrate on your own work if someone next to you is talking, and there are few spaces in which to speak privately with a colleague.) “Digital technology should help human connection when there are constraints of space and time,” Nadella added.

Corns discussed options with R/GA executives in New York, including Sean Lyons, the C.E.O.; Wes Harris, the global C.O.O.; and David Boehm, who oversees the company’s real estate and facilities. The New York executives also had to decide what to do about the company’s two-hundred-thousand-square-foot Manhattan base, an office, at 450 West Thirty-third Street, that was designed by the celebrated British architecture firm Foster + Partners. The design process is depicted in Gary Hustwit’s 2016 documentary, “Workplace,” which charts the evolution of the twenty-first-century office.

R/GA’s headquarters used to be a stop on design tours of cutting-edge New York City offices. Another must-see workspace was Campari America’s office, done by Gensler, the world’s largest workplace-design firm, and situated in the Grace Building, overlooking Bryant Park. But, as the pandemic dragged on, an expensive showplace office in Manhattan, where rental costs in a Class A high-rise can amount to twenty thousand dollars per employee per year, began to seem like an albatross of costly, unused space.

In San Francisco, Corns’s decision was relatively simple: “We said, ‘Let’s pull ourselves out of this lease, go fully virtual, and treat the office like we would treat any client project, where we start from a blank slate.’ ”

The next set of surveys, conducted in June and July, asked, Harris said, “Now that we are successfully working in a virtual world, what should the future post-covid office look like, and how do you blend the physical and the digital in this new paradigm?” Everyone said that they missed seeing their colleagues in person, but very few workers envisaged returning to the office five days a week. One to three days was more appealing.

Posted by Angela Valenzuela at 1:08 AM