This 1776 Report equates to outright lies and propaganda, not unlike what we saw here in Texas with our famous textbook battle in 2016 and 2017 before the Texas State Board Education with the proposed adoption of a racist, error-riddled textbook offensively titled, "Mexican American Heritage," written by two non-historians named Jaime Riddle and Valarie Angle that would have done enormous damage to our children had it been adopted. You can read all about this in Dr. Emilio Zamora's scathing critique here on this blog.

This book surfaced while many of us were advocating for a high school Mexican American Studies course and texts, with Zamora outlining the following:

The story began last summer when we heard that Momentum Books had proposed to the Texas State Board of Education a textbook for adoption to teach Mexican American Studies in the state’s public schools.  We suspected a problem when we discovered that the owner of the publishing house was Ms. Cynthia Dunbar, a former conservative member of the State Board, an Assistant Law Professor at Jerry Falwell’s Liberty University, a recent Trump delegate to the Republican Party Convention, and a co-chair of Senator Ted Cruz’s presidential campaign.  The selection of the book’s authors, Jaime Riddle and Valarie Angle, also raised concerns.

Relatedly, read "Texas' New Public School Textbooks Promote Climate Change Denial and Downplay Segregation: And they could end up in your kid's classroom too."

A major difference is that whereas the Riddle and Angle text at least pretended to be factual--even as the meticulous work of the review team of historians spearheaded by Dr. Zamora identified and reported 407 errors to the SBOE--the 1776 Report, according to public historian Alexis Coe, "[L]acks citations or any indication books were consulted, which explains why it’s riddled in errors, distortions, and outright lies.”

I am so happy that President Biden and Vice-President Harris are now in charge, meaning that our nation's highest office will not implicate itself in lies and gaslighting the American public with a false historical, racist narrative that masquerades as truth.

In the meantime, we must always call out such racist texts like these wherever and whenever they surface. 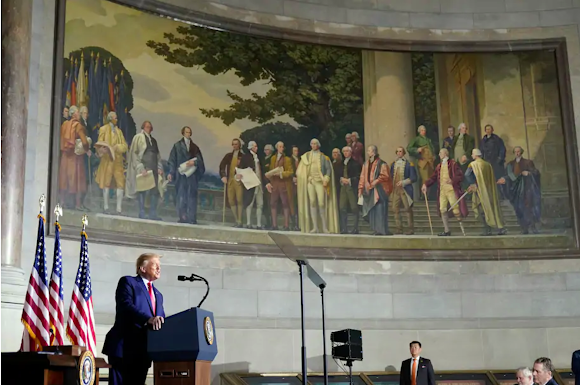 President Trump speaks to the White House Conference on American History at the National Archives Museum on Sept. 17 in Washington. (Alex Brandon/AP)

Two days after historians responded with dismay and anger to the White House’s “1776 Commission” report, the Biden transition team announced President-elect Joe Biden would rescind the commission with an executive order on his first day in office.

The report was intended to a version of U.S. history that would “restor[e] patriotic education” in schools. Historians largely condemned it, saying it was filled with errors and partisan politics.

The commission was created in September with a confusing news conference featuring Housing and Urban Development Secretary Ben Carson. The 45-page report is largely an attack on decades of historical scholarship, particularly when it comes to the nation’s 400-year-old legacy of slavery, and most of those listed as authors lack any credentials as historians. While claiming to present a nonpartisan history, it compares progressivism to fascism and claims the civil rights movement devolved into “preferential” identity politics “not unlike those advanced by [slavery defender John C.] Calhoun and his followers.”

“I don’t know where to begin,” said public historian Alexis Coe. “This ‘report’ lacks citations or any indication books were consulted, which explains why it’s riddled in errors, distortions, and outright lies.”

Kali Nicole Gross, a history professor at Rutgers and Emory universities and the co-author of “A Black Women’s History of the United States,” said it was “dusty, dated” and “the usual dodge on the long-lasting, harmful impacts of settler-colonialism, enslavement, Jim Crow, the oppression of women, the plight of queer people … as the true threat to democracy.”

Boston University historian Ibram X. Kendi tweeted: “This report makes it seems as if slaveholding founding fathers were abolitionists; that Americans were the early beacon of the global abolitionist movement; that the demise of slavery in the United States was inevitable.”

“It’s very hard to find anything in here that stands as a historical claim, or as the work of a historian. Almost everything in it is wrong, just as a matter of fact,” said Eric Rauchway, a history professor at the University of California at Davis. “I may sound a little incoherent when trying to speak of this, because the report itself is not coherent. It’s like historical wackamole.” 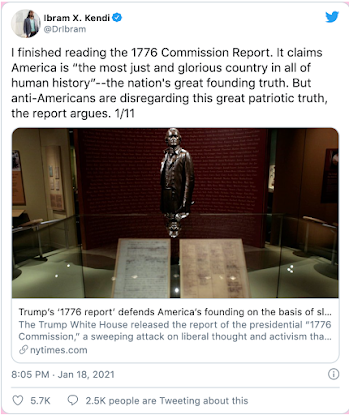 He pointed to sections misinterpreting Puritan John Winthrop’s “city on a hill” speech, and to a section claiming the civil rights movement “came to abandon the nondiscrimination and equal opportunity of colorblind civil rights in favor of ‘group rights.’ ”

“Group rights is not anathema to American principles,” he said, recalling the formation of the Senate. “Why do Wyomingers have 80 times the representation that Californians have if not for group rights?”

Coe, who published a biography of George Washington last year, pointed to a section of the report that claims the first president had “freed all the slaves in his family estate” by the end of his life. In fact, he freed only one enslaved person upon his death; the 254 other enslaved people at Mount Vernon had a much more complicated fate.

George Washington owned slaves and ordered Indians killed. Will a mural of that history be hidden?

Hilary Green, a history professor at the University of Alabama, tweeted a list of books on American history people could read “instead of a certain report.”

Several historians said it was particularly offensive that the report was released on Martin Luther King Jr. Day and included several photos King and quotes they said were taken out of context.

“The suggestion that affirmative action programs are somehow antithetical to the vision of Martin Luther King Jr. is simply ludicrous,” said Princeton historian Kevin M. Kruse. “King was alive when the Johnson administration launched its affirmative action programs and publicly declared his support, specifically noting that it was a logical extension of the struggle for black equality. The document ignores King’s record of support for affirmative action, lamely pointing to the one line conservatives know from his ‘I Have a Dream’ speech and ignoring the rest of his radical record. The fact that this historical distortion of King’s life and work was released on MLK Day makes it even worse.”

“To say that the racial divisions that have existed for the last half century are due to insistence by African Americans on ‘group rights’ rather than to the depth and breadth of racism, to say that on a page where you have a photograph of Dr. King is offensive to Dr. King’s legacy,” Grossman said.

The commission began in part as a response to the New York Times’s 1619 Project, a group of essays by historians and journalists about the way slavery has shaped the nation.

At the National Archives Museum on Sept. 17, President Trump criticized a New York Times project focused on the first arrival of enslaved Africans in Virginia. (The Washington Post)

Five professors say the 1619 Project should be amended. ‘We disagree,’ says the New York Times.

Even historians who have been critical of the 1619 Project, including Princeton’s Sean Wilentz, dismissed the 1776 report.

“It reduces history to hero worship,” Wilentz wrote in an email. “It's the flip side of those polemics, presented as history, that charge the nation was founded as a slavocracy, and that slavery and white supremacy are the essential themes of American history. It's basically a political document, not history.”

Historian Kevin M. Levin, author of several books about the Civil War, said: “The 1776 report views students as sponges who are expected to absorb a narrative of the American past without question. It views history as set in stone rather than something that needs to be analyzed and interpreted by students.”

The White House also released Monday a long list of historical figures to be featured at Trump’s proposed “National Garden of American Heroes.” Georgetown history professor Adam Rothman compared the report to the list, saying it was “nothing but the National Garden of Heroes in prose form, a stiff and lifeless history of America on a pedestal.”

Grossman, the AHA executive director, said: “This is written as if no historical scholarship has been produced in nearly 70 years, so it’s bereft of any professional historical sensibility at all. There are no historians on this commission. Would you take your car to a garage where there’s no mechanic?”

Teo Armus contributed to this report.

Posted by Angela Valenzuela at 9:10 AM