Link here to access this great resource on Mexico's Indigenous peoples. You can drill down on the basis of which state you select. There is important historical and scholarly detail on numerous topics, including slavery, the encomienda system, Afro-indigenous roots, migration patterns, politics, and genealogy. Lots to learn from this rich, complex, vibrant history. 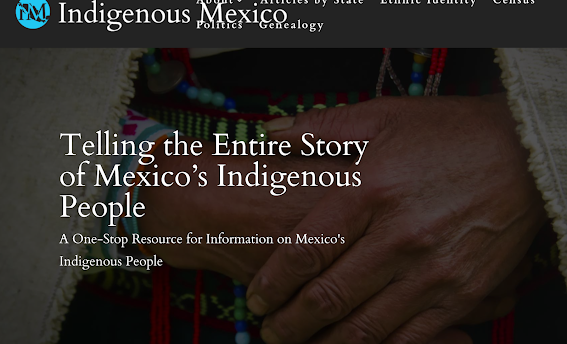 When most people think about the Indigenous people of Mexico, they think of the Aztecs and Mayans. But the Aztec Empire only ruled over eight of the current 32 states of Mexico and the Mayans inhabited only five states of present-day Mexico.

We believe that EVERY MEXICAN STATE HAS A STORY TO TELL.

And every one of Mexico’s 64 ethnolinguistic groups has a story to tell. And we hope to give them a voice by telling their stories.

Posted by Angela Valenzuela at 12:29 PM