Friends,
I am happy to feature this piece by Olivia Tamzarian known and loved by so many of us who is registering a plea for help in the struggle against privatization and gentrification in East Austin.
Please consider voting NO against Prop. B.
No, we should not allow the Oracle corporation to do our city planning
-Angela Valenzuela
“Get Oracle out of City Planning: Why We All Should Vote Against Proposition B”

As a Riverside resident, I’m  deeply concerned about Proposition B in Austin.

Why was Oracle, the giant company that took over Lakeshore and is the main gentrifier in this area, running our Riverside neighborhood association? I left with a deep sense of anger in the pit of my stomach. The very group that was supposed to have the community’s best interest at heart was unduly and illegitimately influenced by those with a financial interest in Riverside.

I cut ties with Friends of Riverside to attend Austin City Council rezoning meetings, and I started doing more research on exactly what is going on under our noses. What I found is that while Austin sleeps, Oracle, a private company, keeps gobbling up more and more of our city’s land.

I don’t ever want to leave Austin. It’s my home. I have come to terms with the fact that I may never afford to own a home here. As long as I can afford to rent, I can stay. But I know what will finally push me out of my neighborhood is all of the development of the “Domain on Riverside” down the block from the apartment complex where I have lived for the past 15 years.

Which brings me to my main question and concern about Proposition B:

"Why do we let a mega-corporation like Oracle do our city planning?"

While long-time Austinites have watched their city get less and less affordable over the years, they have simultaneously witnessed exponential growth in giant, new companies moving into Austin and our communities, resulting in fast-paced gentrification for East Austin’s communities of color. Dallas, Texas-based real estate giant, Presidium, and the Oracle development and other megacompanies, have been making serious money-moves that are poised to not only dispossess East Austin residents, but are ruinous to diversity.

East Riverside, Austin, is where so many start out. It’s a place where UT students live, where young people set about and settle in to adult life. It has been home for decades to service and industry workers, immigrants, and refugees that makeup the city’s “essential workers” to which the pandemic has brought notice as the very lifeblood of our city. I started here, like so many others, because it offered affordable housing. Plus, it was the closest I could get to my downtown job without a car.

Developers of this area have realized that Riverside, is actually a great place to live in Austin, especially since other options of affordable housing have vanished into thin air. They seek to capitalize on the neighborhood that has gone under the radar for too long. How dare working people without lofty California incomes inhabit such a desirable track of land right near Ladybird lake? How can one conceive of this as anything other than a race and class issue and classic land grab by the uberwealthy? Oracle is offering its current and future employees a lifestyle that many Austinites cannot themselves afford and with such blatant disregard for East Austin residents that have resided there for generations.

The Domain on Riverside is a two-decade construction plan, spanning over 100 acres including parkland at Roy Guerrero park. The scale of this project is massive, razing over 1,300 affordable housing units to create a mega mall for the rich. If I can afford to stay to see it to completion, according to a story by Egan (2020), that means I will live next to a construction project for the next 10 to 20 years.

How many of these gentrification projects are being approved under our noses, leaving us to shake our heads and mumble about how we used to afford to do this and that? It always seems like when projects like Prop B are proposed, the true agenda is hidden under thinly-veiled rhetoric, claiming that Austin will somehow gain from catering to the developers, ignoring the glaring truth that these massive developments negatively affect the people who are already living in the area to be “developed.”

These are my actual friends and neighbors. In the 2021 freeze I met hard working people, families scooping pool water to flush their toilets and trading dry food and flashlights. We will all be directly impacted. Co-workers, teacher friends, artists, and young professionals who all contribute greatly to Austin while contributing to its diversity. We deserve to have a voice in these decisions. Every time a new luxury condo is built, “the market value of the neighborhood went up,” we are told, so they raise our rent. How much more? We never know until we get that fateful letter that states that we must reconcile ourselves to another one-year contract. It could also come as an eviction notice when a complex is bought and sold. Since Austin’s occupancy rate and rents are so high, if I can’t make rent, as I have been already callously told, the next person will.

At the re-zoning meetings in Fall, 2019, I listened to Developers claim that the affordable complexes in Riverside like mine, the last ones closest to downtown, are unsafe and in poor condition. It’s uncanny that this concern only applies to the exact units they want to tear down and build on top of. My complex, safe or unsafe, isn’t in the exact tract that Presidium accumulated, so it will stay in the exact same condition while it continuously becomes more expensive right in front of my eyes.

What people have to realize is that for so many of us, the Riverside neighborhood is not just a pass-through, not just a route from the airport to downtown. The developers and city planners conveniently paint it as “rundown,” simultaneously describing and rationalizing their land-grabbing plans for it to be re-worked as a “corridor” for arriving tourists. 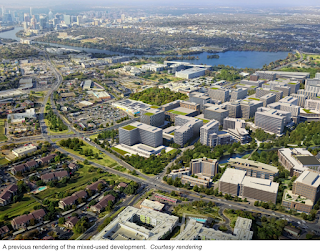 At three City Council meetings that I attended in 2019, a large number of Ausitinites spoke out against the re-zoning of a giant tract of land at Pleasant Valley and Riverside, which essentially “unhomes” thousands of the last affordable housing close to downtown. Perhaps not so ironically, the planned Domain on Riverside and the existing Oracle complex are just down the block from one of the larger camps of people experiencing homelessness.

I didn’t actually believe the proposed re-zoning would pass since at first, most City Council members were against the Domain on Riverside, admitting that it would displace vulnerable populations including many Latino, student, and refugee communities. But something noticeably changed over the three hearings as the community got exceedingly vocal. The vote skewed more in favor of the developers who sensed the resistance and came back with a proposal to enter into an agreement with the Austin-based non-profit, Ending Community Homelessness Coalition, donating money to their organization to persuade Council to vote in favor of the developers.

I wonder if any Austinites would say that the homelessness problem improved after 2019, particularly as no specific deliverables have been shared and the pandemic has swelled the ranks of the homeless (Fecher, 2021).

I made it a point at the October, 2019, City Council hearing that when developers say they will put aside 10 percent of their units for affordable housing, what they are actually saying is that 90% of their units will be unaffordable (KVUE, 2019). By the third City Council vote for the rezoning to build the Domain on Riverside, over 50 community members spoke out, in tears, while protesters raged outside City Hall appalled by this outright blow to working communities and communities of color.

And yet on that last vote, there was a weary helplessness to the room. Ms. Harper Madison went on record saying she did not support it, but she went to vote for it anyway. The vote was 6-3 with Council Members Greg Casar, Delia Garza and Leslie Pool against. Council Member Alison Alter abstained, and Council Member Kathie Tovo was off the dais (Jankowski, 2019).

And despite so many Austin programs and funds that are intended to combat gentrification, so many non-profits and activists who I admire are doing work to get resources to help folks who have been displaced, I can't help but repeat the mantra, "If you don't take somebody's business or you don't drive them out of town, then you don't have to worry about putting them back years later, throwing more time and money at the situation (Adami, 2019)."

So when Proposition B is discussed as a project for John Treviño park, make no mistake it is actually an elaborate scheme that will privatize Riverside on the Lakeshore area to Oracle. If Prob B passes, voters would OK the City of Austin selling, leasing or exchanging its Lakeshore property, which happens to be next to Oracle’s headquarters.

Proposition B is another proposition that chips away and privatizes even more the most beautiful part of the Riverside neighborhood, making it just another amenity for the Oracle mega-complex to enjoy. The offer to exchange parkland for it as a way to sweeten the deal makes it even more obvious just how much we as city residents stand to lose. Taking shoreline parkland away from the Riverside community in order for the city to “acquire” parkland in far East Austin is the proverbial “robbing Peter to pay Paul” scenario best understood as “taking something away from one person to pay another, leaving the former at a disadvantage.”

Again I ask, "Why do we let Oracle do our city planning?"

Posted by Angela Valenzuela at 6:40 PM