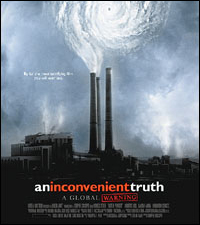 I'm glad that the National Science Teachers Association (NSTA) made the right decision and decided to make Al Gore's AN INCONVENIENT TRUTH available to science teachers throughout the nation.

A producer of former Vice President Al Gore's film about global warming has arranged to have free copies of it given to science teachers through a Web site, after a leading education group made a controversial decision not to distribute the documentary directly to its members.

Laurie David, the co-producer of "An Inconvenient Truth," said this week that the first 50,000 teachers who request the movie for use in their classrooms would be given DVD copies, on a first-come, first-served basis. Information on obtaining the movie is posted at www.participate.net, a Web site maintained by Participant Productions, a Beverly Hills, Calif.-based film-production company that seeks to raise awareness of social issues.

Ms. David originally offered to give 50,000 free copies of the film to the National Science Teachers Association, an influential professional organization in Arlington, Va., if NSTA officials would agree to distribute copies to its 56,000 members. The NSTA rejected that offer, saying it would have violated the organization's policy of not distributing or endorsing products from outside groups or individuals.

That decision angered supporters of the film, who questioned whether the NSTA's stance was based on its having received funding from oil interests, including the foundations of the ExxonMobil Corp. and the Conoco Phillips Co. The fossil-fuel industry has disputed some of the statements about the assertions of human activities on climate change that are made in Mr. Gore's film.

NSTA officials denied any such motivation and offered Ms. David various alternatives for making teachers aware of the film. Officials from the teachers' association said Ms. David rejected those proposals.

A teacher who logs on to the Participant Productions site is asked to provide a nine-digit federal tax identification number for his or her school. The DVDs were made available Dec. 18, and the offer will continue until Jan. 18. Teachers will receive the materials in six to eight weeks.

"Since the film debuted, we have received hundreds of e-mails from teachers interested in using 'An Inconvenient Truth' in their classrooms to educate students about global warming," Ms. David said in a statement. "I hope it helps inspire and move a generation toward solving this urgent problem."

Ms. David's statement was released by the National Resources Defense Council, a New York City-based environmental group that was critical of the NSTA's decision not to distribute the DVD and on whose board Ms. David serves. She said the film giveaway was supported financially by Participant Productions, Paramount Vantage, a film distributor, and the Environmental Media Association, a Los Angeles-based nonprofit organization.

NSTA officials initially offered to put information about Mr. Gore's film on the organization's Web site, and distribute it through e-mail and printed materials—efforts that they argued would have had a broad impact. The organization also has invited the former vice president to speak at its annual meeting in March, an offer that still stands, NSTA spokeswoman Jodi Peterson said in an e-mail this week.

After learning of Ms. David's efforts to distribute the film on the Web site, the NSTA put a link to that Web address from the organization's own homepage, at www.nsta.org.