Some response to last week's LBB proposed budget (HB 1). I'm sure this is just the beginning. I hope our media also prioritizes community voice and opinion on this issue.

You can download the entire proposal and specific exec. summaries at an earlier post on this blog. 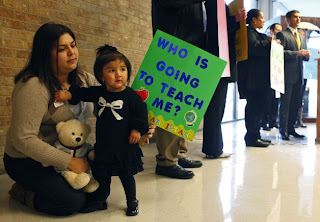 Danielle Gonzalez, who's studying at the University of the Incarnate Wordto be an educator, sits with 16-month-old niece Aliana Chavez during a news conference by state Rep. Mike Villarreal to talk about the impact the state's base budget bill on schools.
Photo: LISA KRANTZ/lkrantz@express-news.net / SAN ANTONIO EXPRESS-NEWS

Flanked by local educators, students and parents, state Rep. Mike Villarreal, D-San Antonio, on Friday blasted a proposed state budget that over the next two years would cut nearly $14 billion in spending on public K-12 and higher education.

“This budget is nothing less than an abdication of responsibility,” Villarreal said at a news conference at Brackenridge High School in the San Antonio Independent School District. “Texas has never been a big-spending state, but we have always made investments in our basic infrastructure. There is nothing more basic than educating our children.”

On Tuesday, GOP leaders released a bare-bones budget that would balance a shortfall of at least $15 billion with deep cuts to education, including cutting funding for four community colleges, yanking financial aid for incoming college students and eliminating grant funds for prekindergarten, high school completion programs and science labs.

The base budget proposal does not account for growth. Taking into account swelling school and Medicaid rolls, some put the gap at $27 billion. GOP leaders have pledged to balance the budget with no new revenue and without dipping into the state's rainy day fund.

“It's impossible. It's a total failure by the state to maintain the infrastructure that supports our economy,” said Blakely Fernandez, a trustee for the Alamo Colleges.

If the cuts stand, Fernandez said local school districts and community colleges may be forced to raise property taxes.

“Money is going to have to come from somewhere. This is a push-down program,” Fernandez said.

The largest chunk — $11.6 billion — would be cut from K-12 education. Higher education would lose $2.1 billion, according to the Legislative Budget Board.

Francisco Cigarroa, chancellor of the University of Texas System, called the cuts “dramatic and deep” and said they would result in more layoffs, enrollment caps and the elimination of entire programs at the system's nine universities and six health science centers.

The cuts “will have immediate and future devastating consequences for our students, patients, faculty, staff and the communities of Texas,” Cigarroa said in a statement.

The budget also shuts out new students from TEXAS grants, the state's chief financial aid program for needy students. Offering only renewals, the grants would serve 85 percent fewer students over the next two years.

Betty Burks, deputy superintendent of SAISD, said the district would likely cut prekindergarten programs to a half day rather than a whole day, one of many tough decisions they will be forced to make.

“This is a crisis for SAISD. We are the heart of the city,” Burks said.

Elaine Mahler, the grandparent of two children at Hawthorne Elementary, said she moved to the United States from Belize to give her children a better education. It angers her to see politicians “playing games” at the expense of children's education.

“It's a shame on those who choose to do that,” Mahler said. “Pay now or you will be paying more later in prison beds.”

Denise Barkhurst, president of Big Brothers Big Sisters of South Texas and a parent of two children in the North East Independent School District, said Texas already ranks in the bottom nationally when it comes to education spending per pupil.

“I am proud to be a Texan, but I am ashamed of the ranking,” Barkhurst said. “They want to try to balance a budget with no money, just cut, cut, cut. Economically, it is going to cripple us.”

Community colleges threatened with closure include Brazosport College in Lake Jackson, Frank Phillips College in Borger, Odessa College and Ranger College. The measure would save $39 million and affect nearly 12,000 students.

According to a blog on Brazosport College's Web site, school officials found the announcement “very puzzling,” citing record enrollment in 2010.

Villarreal blamed the crisis on an unsound budget structure and said he is proposing a series of measures to overhaul the tax code and close loopholes.

Given the immediate crisis, however, nothing is off the table, including ideas to consolidate school districts, university systems and state agencies such as the Coordinating Board and the Texas Education Agency.

Waxing psychological, Villarreal compared the crisis to the stages of grief, starting with denial of the impending shortfall.

From there, Texans have moved to anger and will soon begin bargaining, using accounting tricks and Band-aids to try to cover the gap. A period of depression almost surely will follow before lawmakers reach acceptance, he said.

“We need to accept our obligation to balance the budget with foresight,” Villarreal said. “We will not get to acceptance if we do not pass these other stages.”
Posted by Dr. Patricia D. López at 12:43 PM