Lessons from the Valley of Mexico Part II 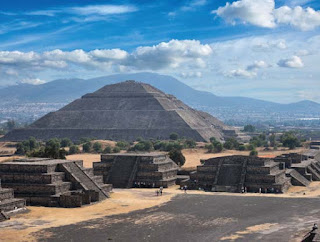 The Aztec-Mexica came upon the abandoned City of Teotihuacan in the fourteenth century.  The Aztec-Mexica, founders of Tenochtitlan were late-comers to the Valley of Mexico. Since their arrival, anthropologists and archeologists have wondered what lead to Teotihuacan’s downfall.  On a recent visit to Teotihuacan, I heard a theory that struck a chord as to how this colossal city, of what some estimate to have been home to more than 250,000 people, came to its end.  The story has important lessons for our lives today and for how we relate to our environment.  The story of Teotihuacan begins with the oldest pyramid in the Valley of Mexico at Cuicuilco (Cuicuilco), the first agricultural center in the Valley of Mexico.  Cuicuilco was believed to have been home to around 40,000 inhabitants until it was destroyed by an eruption of the nearby Xitle volcano.  Cuicuilco is located in the southeastern part of the Valley of Mexico in the area now known as Pedregal de San Angel.  This is the current location of several Universidad Autonoma de Mexico buildings which now sit atop of the archeological site and lava flow. The site of Cuicuilco is buried under 20 feet of black lava stone, the kind of stone molcajetes are made from.

After the destruction of Cuicuilco, it is believed the survivors left this portion of the Valley of Mexico and settled in the area that became Teotihuacan.  This environmental disaster, not of man’s making, forced the resettlement of the Cuicuilco inhabitants to locate elsewhere.  The pyramid at Cuicuilco remains a testimony to the helplessness of man vis-à-vis the awesome forces of our natural environment.

The destruction of Cuicuilco precipitated the edification of Teotihuacan.  The arrival of the inhabitants of Cuicuilco may have provided a substantial force for the development of Teotihuacan.  For centuries, the City of Teotihuacan flourished as a major trading center within Mesoamerica.
There are many theories that attempt to explain how the Aztec-Mexica came to find Teotihuacan abandoned when they came across it in the fourteenth century.  One theory centers around how local resources were utilized in the development of Teotihuacan.  Behind the Pyramid of the Moon is a mountain that at one time was covered with forest.  It is believed that the Teotihuacanos, without realizing the damage deforestation would cause, utilized this forest’s wood for the construction of roofs, building supports, as well as fuel.  The theory asserts that the trees of this forest were critical to maintaining the city’s water supply.  The forest, it is believed, absorbed rainfall used by the city’s inhabitants.  As the forest gave way to an arid mountainside, the water flow diminished until it ran completely dry.  Of course, these environmental pressures due to climate change surely incited other pressures which lead to political infighting, the burning of the city, and its ultimate downfall.  The example of Teotihuacan gives us something to contemplate when we think about how we use our resources and the devastating effects man can have on the environment.