Praise to Texas State Rep. Christina Morales (D-Houston) for leading on Ethnic Studies for the state of Texas. Her own personal story published by the Houston Chronicle that she shares below is compelling. We should all know our history and experience pride in forming part of the grand American story.

Ample qualitative and quantitative evidence exists that demonstrates strong positive, and consistent academic benefits of Ethnic Studies for all children and students to succeed in school, regardless of ethnicity. If our students succeed academically, increasing achievement and graduation rates as credible data have shown, our children's futures hold enormous promise.

By this, we mean that the process of standard-setting has taken place and these are already full-fledged courses in state curricula. Two additional Ethnic Studies courses, namely, Native American and Asian American Studies, are in the process of getting TEKS-aligned.

Now it's time to make Ethnic Studies count toward high school graduation. Join us for a conversation this PM on Facebook Live to get additional details pertinent to the bill and how to support this truly historic effort. 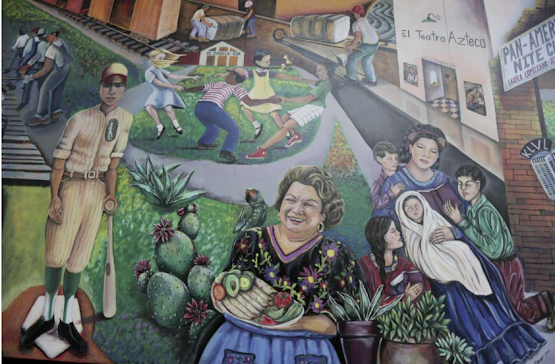 I am blessed to know my history.

My grandfather attended a segregated school. My grandmother remembers a park in San Antonio with a sign that read “no dogs or Mexicans allowed.” We have come a long way since then, but there is still so much work to be done. Knowledge of my heritage helped me become a leader and play a role in making Texas a better place.

That is why I am introducing a bill in the Texas Legislature to award full credit to high school students for ethnic studies courses and count them towards their graduation requirements. Texas youth deserve to know their history.

When my grandparents moved to Houston in 1931, they moved to Second Ward, which we lovingly call “Segundo Barrio.” There they found the neighborhood with the highest concentration of Latinos, mostly Mexican and Mexican American. This is where they would later open “Morales Funeral Home,” the first Latino-owned funeral home in Houston, and then a cemetery. The funeral services they provided to families were filled with compassion and provided everyone during their time of mourning with recognition and respect for their Mexican heritage.

In 1950 they opened Radio Station KLVL — “La Voz Latina.” For many years, it was the only Spanish language radio station on the Gulf Coast. The radio station was not only a form of entertainment, but it provided news, weather, job listings and talk shows where community members could call in and share accomplishments, celebrations and tragedies. Just imagine being in a foreign country and unable to speak the language. How would you know if a hurricane was coming? How would you find a job? Our history was not taught in schools, seen on TV or celebrated, so how could you remember your heritage, tradition and shared history?

In the years since, commerce blossomed, families thrived, and Segundo Barrio and Houston grew as the Latino population significantly increased.

Now there are many Latino funeral homes and Spanish radio stations across the Houston area. Latinos have grown exponentially in our city and in our state. Our history and contributions, however, are not regularly recognized or celebrated outside of our neighborhoods or the households where families share their customs.

I feel fortunate to be a part of the history of Segundo Barrio. I see our family’s name on our building every day.

I can hear my family’s last name ring out in the Texas Capitol when I am called as a Texas state representative. I will carry out my family legacy of giving back by championing this ethnic studies bill so that students from our neighborhoods, our cities and our towns can see their family’s contributions in their textbooks, in their curriculum and in their classrooms. This is the Texas-sized version of history that helped create this great state, and we are poised to share it in high schools from Houston to El Paso.

Texans have already united to bring this history forward, and it is time to celebrate its richness to the fullest.

Now, we must take the next step.

These powerful courses are only offered as electives, relegating our history to second-class, extra or something to overlook.

I am submitting a bill to change that.

My bill would allow African American Studies and Mexican American Studies courses to count toward high school graduation requirements. These courses currently lack this critical designation. This change would encourage school districts to invest in the teachers, staff and resources to teach these courses long-term. Most importantly, this change will make our history count.

It would also inspire scholars and activists to develop the curriculum for the approval of further ethnic studies courses, including Asian American and Indigenous American studies. Activist, scholars and elected officials have included both of these disciplines since advocates began championing this new era of ethnic studies.

Study after study confirms that culturally relevant courses bridge the educational divide. The Cabrera Study provided this information at the Arizona Supreme Court and was pivotal evidence in overturning the state’s ban of Mexican American Studies. Now, we must unite so that every district benefits from the richness of these courses. This is especially important in the post-George Floyd era where so much attention is focused on dismantling structural discrimination that permeates our lives.

Culturally relevant courses go far beyond the classroom in cultivating a generation of leaders who will diffuse cultural conflicts early on. These same thinkers can also build a Texas where all our contributions are recognized, respected, and celebrated.

Please join me in delivering a Texas-sized history for all our youth and their families.

Morales represents District 145 in the Texas House of Representatives.

Posted by Angela Valenzuela at 3:34 PM