What’s your story, Linda?
I am a teacher, my mother was a teacher, and my grandmother was a teacher in one-room schoolhouses, so teaching is in my bones. Now I teach Rice students to become teachers, but originally I was a high school English teacher and that has led to all my current work.
I was a high school teacher in a district that had taken twenty years to desegregate its schools. I quickly realized an incredible tension between what they wanted kids to learn and what they didn't want them to know. I thought they had hired me to be the best teacher I could be, to be like the teachers who had inspired me to teach.  A cohort of us in the English department had that same vision for the kids and yet we were being told, “Don't teach Black poetry – that’s political.” I learned then what I've come to call the tension between knowledge access and knowledge control. 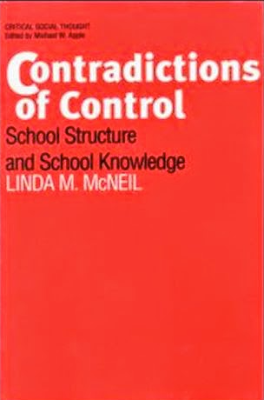 When I had the opportunity to pursue a PhD at the University of Wisconsin, I began with the questions I had faced as a teacher: “What counts as school knowledge?  What factors shape the ways schools make knowledge accessible – or inaccessible – to kids? Whose knowledge is of most worth?”  These questions took me into classrooms for long stints of ethnographic research, looking first at the interactions of teachers and kids and then into the school setting itself.
I observed the dynamic between the teachers and the students, seeing what kinds of questions were being asked, and what was being left out.  This kind of research came naturally to me because I inadvertently became an ethnographer at a very young age.  My dad’s work as an Amoco engineer of the generation that drilled the West Texas oil fields caused us to move frequently.  As the new kid at five different elementary schools, I always began by observing:  who might be a new best friend, which teacher would be kind and interesting.  My experiences, from being a child in some very remote schools to being a teacher who was being told by the administration what not to teach, converged in my doctoral studies and my first book, Contradictions of Control: School Structure and School Knowledge.
I arrived in Houston just as standardization was being imposed on schools, first from the district level, then from the state and, now, nationally.  Suddenly, the curriculum was not being shaped by the teachers in the classroom, but by “the system.”  Teachers were no longer valued as curriculum developers.  Because I was already doing research in classrooms, I was one of the first witnesses to the harm standardization was doing to the quality of schooling.  As multiple-choice standardized tests started to drive what could be taught, I documented huge curricular losses as the tested subjects were watered down into multiple-choice formats, particularly math, reading and writing in those early years. Other subjects were set aside, or their teachers made to replace lessons in the arts, physical fitness and science with test prep drills for math or reading.  Teachers were being forced to dump complex writing assignments, the reading of novels, lab experiments, field trips to arts performances and coastal estuaries, as well as lessons related to the cultures of their students, to drill on the generic content of tests that would be scored by computers.
That was the beginning of twenty years of “school reform” in Texas which has brought us the very top-down, centralized, standardized form of schooling most people look on as a testing system. The testing is really just the tip of the iceberg. The test scores are indicators in a management compliance system that ties everything from students’ graduation to teacher’s pay, administrators’ bonuses and even the closing of a neighborhood school, to scores on a computer-scored test. 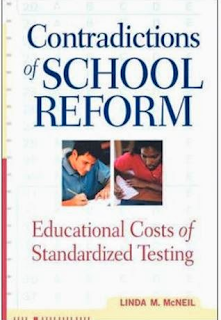 I never thought I would be studying standardized testing.  But even as that first wave of testing came in, it became clear that the big investments in “education reform” would not be for perpetually underfunded schools or scholarships to recruit young people into teaching. The financial – and political – investment would be in the testing system. Despite all the research to the contrary, despite reports from teachers and child development experts, none of the arguments on behalf of children could be heard above the domineering voice of the testing industry. Testing companies have lobbyists; third grade children don’t.
I believe, however, that it’s up to all of us to do everything we can to create the professional, political and moral space in which good teachers can make magical things happen every day for the children in their classrooms.  It was this belief that prompted the two strands of work I’ve been doing.
The first was to create the Center for Education, with programs in support of teachers’ development. And the second was to embark on a series of research studies that could inform not only educators, but also parents and policy makers, about the impact of the standardized accountability system on children and schools.
Even before the testing became so ubiquitous, my colleagues and I were very concerned about the anti-teacher climate in the press and in politics. We were, after all, preparing bright, dedicated Rice students to teach and we wanted them in schools hospitable to knowledgeable, caring teachers.  So Ronald Sass, now an emeritus scientist professor, and I created the Center for Education to be a base for teacher development. We had generous funding and incredibly wise advice from Maconda Brown O’Connor, our first board president.  A trustee of the Brown Foundation, she was a social worker who counseled boys in juvenile detention.  As she helped the boys connect back to their schools, she could see the ways schools could be nurturing or could exclude these youth as “problem kids.”  To Maconda, every child had promise, and her support of our work came from her own sense of urgency that all teachers needed support to be able to help all kids thrive.  She was a “practical visionary” whose lessons continue to teach us.