Excellent news out of North Dakota! The excitement in the story is palpable. Long overdue, to be sure. 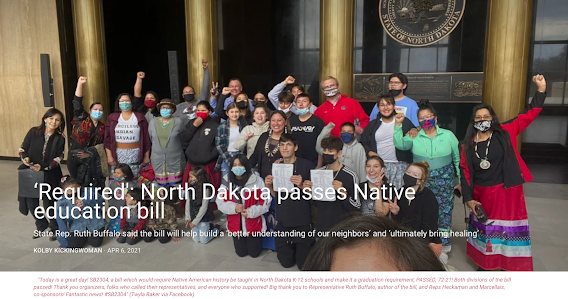 A North Dakota bill requiring curriculum to be taught on Native American history for K-12 students passed in the State house on Tuesday.

North Dakota State House Rep. Ruth Buffalo of Mandan, Hidatsa, Arikara Nation said that prior to this bill’s passing, the state law and century code left it to individual school districts discretion on whether or not to teach Native American history.

Buffalo didn’t know what to expect Tuesday after being informed by another house member that the bill would be split into two divisions.

The other house representative favored division A and not B.

“This bill has been amended several times, but it's still good, the way it is,” she said. “We're still very happy with today's outcome because the keyword is ‘requires’ in there.”

Cara Currie-Hall, Maskwacis Cree, and her husband Ken Hall, Mandan, Hidatsa, Arikara Nation, were on-hand for the vote and have been advocating for the legislation for some time.

They were far from the only two pushing to get it across the finish line though, Hall said.

“It took a team effort; it took a lot of people emailing, texting, calling all of their state legislators, to try to get behind this bill,” he said over the phone.

Currie-Hall also expressed gratitude for everyone who joined in supporting the legislation.

Buffalo also thanked the community for showing up and lending their support from start to finish. After the votes were tallied, Buffalo said the Speaker of the House had to use his gavel when applause, cheers and women “rattled their tongues.”

“When I heard the cheers and after the votes were cast, I was just overcome with emotion because this is so important, for not only Native Americans but non-Native Americans too,” Buffalo said. “You know, this is a really good, big step in the right direction.”

North Dakota’s efforts to incorporate Native American history into the curriculum started with Montana’s state constitution in 1972. But it didn’t go into full effect until 1999 with the Indian Education for All Act sponsored by then-state representative Carol Juneau, mother of Denise Juneau, Mandan, Hidatsa and Blackfeet.

In a Facebook post celebrating the passage of the bill, the North Dakota House and Senate Democratic and NonPartisan League Caucus said cheers from students attending the session could be heard from the balcony.

They also congratulated one of the original bill authors, Rep. Buffalo.

“As the author of the original bill, Representative Buffalo believes this curriculum will contribute to the visibility of Native Americans--both in a historical context and as a modern population,” the post says.

Twyla Baker of the Mandan, Hidatsa, and Arikara Nation also took to social media to share her excitement of the news.

“SB2304, which would require Native American history be taught to K-12 in North Dakota PASSED the House today, 72-21! Congratulations to primary sponsor @Ruth4Nd and all the organizers, this is such fantastic news!,” Baker tweeted.

While Buffalo was the author, the bill's primary sponsors were Democratic state senators Joan Heckaman and Richard Marcellais, Turtle Mountain Band of Chippewa.

Moving forward, Buffalo sees the bill being a big positive for the state.

“That's really going to help work towards building community, you know a better reaching a better understanding of our neighbors and also you know ultimately it's going to bring healing,” she said. “So we're just super excited and proud and thankful that my colleagues in the state legislature saw fit to pass this bill, and it took everybody to help with this. It was definitely a team effort and community effort, a North Dakota effort.”

The bill now heads back to the state senate where they will take a look at any amendments that were made on the House side.

The next step is determining when the bill will take effect. The original bill text had an effect date of 2022 but there was debate pushing it back to 2024.

Like this story? Support our work with a $5 or $10 contribution today. Contribute to the nonprofit Indian Country Today. Sign up for ICT’s free newsletter.

Posted by Angela Valenzuela at 7:31 PM