Signed by a governor and a legislature that doesn't have a clue about Critical Race Theory. It's worth reading the actual bill, Senate Bill 3. It makes the presumption that teachers are teaching in a harmful way toward white children when they are not. The underlying issue here is Texas legislators not wanting to Texas school children to know the ugly truths about history, including those "details" like slavery, conquest, and colonization. Based on my own experience as an expert witness in the Arce v. Douglas trial out of the Tucson Unified School District where the Mexican American Studies program was dismantled, I am confident that this law is in violation of both the First and Fourteenth Amendments to the U.S. Constitution.

Accordingly, I encourage all to read this Amicus Brief filed by the American Association of University Professors to Texas' Attorney General Ken Paxton in response to a query he received from Texas State Representative James White regarding the constitutionality of "the teaching of ideas about race, including critical race theory (“CRT”)." The response by AAUP attorneys if pointed and powerful, expressing the following:

"The AAUP strongly opposes political efforts to ban ideas from the classroom. Whether they take the form of overt legislative attacks on academic freedom or, as in the case of Representative White’s Request, insidious attempts to distort the Constitution from a charter of freedom into a license for politically motivated censorship, the unmistakable aim of such efforts is to impose thought control on American education and thereby on the American people. That aim stands in irreconcilable conflict with the principles of free inquiry, free thought, and free expression which the AAUP has championed for more than a century. The AAUP particularly opposes recent efforts—of which the Request at issue here is a part—to ban discussions of racism and its impact on American history and society. Education plays a vital role in cultivating and preserving a free, just, and prosperous society. America’s schools are “the nurseries of democracy.” Mahanoy Area Sch. Dist. v. B.L., 141 S. Ct. 2038, 2046 (2021)."

"Thought control," they cogently state. After all, that's what censorship is. Thought control. You can read the rest for yourselves.

Even if the republicans in power do not respect the Constitution, we still have one.

We've seen right-wing extremist movements like these before. It will be a protracted struggle as all of this still has to play out. I am confident that it is abundantly winnable because right-wing extremists also benefit from the same constitutional guarantees as those of us on the left or center.

In the mean time, it is incumbent on our teachers to #TeachTheTruth and for their school leaders, as well our administrator and teacher organizations, school boards, and civil rights organizations to back them up.

If you are a faculty member involved in the preparation of teachers or school leaders— and you do so from a CRT lens—please consider signing this declaration authored by UT Curriculum and Instruction professor, Dr. Noah DeLissovoy, and myself. We already have over 175 signatures from faculty of all ranks from many Texas universities.

All of our organizations need to be devising such declarations or petitions, as well as resolutions. Moreover, the political and legal aspects of this battle need to work hand in hand. And while we're at it, let's do everything possible to get our youth and communities registered to vote so that we can get this extremist government out of power.

After months of bitter debate on critical race theory, Abbott signed off on a bill that bans the concept on race and slavery from Texas classrooms. 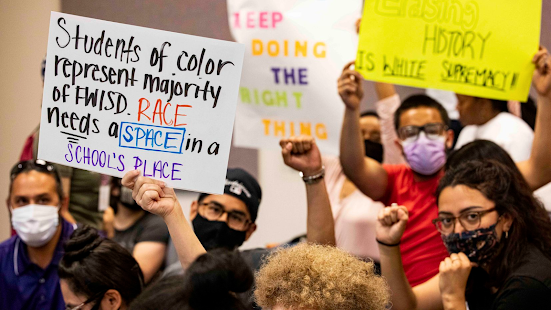 Community members in support of equity conversations in schools hold signs on Tuesday, June 22, 2021, during the Fort Worth ISD board meeting in Fort Worth. After months of back-and-forth on critical race theory, Gov. Greg Abbott signed off on a bill that bans the concept from Texas classrooms on race and slavery.(Juan Figueroa / Staff Photographer)

Gov. Greg Abbott signed into law a bill that aims to further ban critical race theory from Texas classrooms, even after educators and advocacy groups fought against the move for months.

The new law, signed Friday without fanfare, prohibits teaching certain concepts about race; develops a civics training program for teachers; and largely bars schools from giving credit to students for advocacy work. It also urges educators to teach only that slavery and racism are “deviations” from the founding principles of the United States.

It aims to strengthen Texas’ law passed in May that seeks to eliminate critical race theory from schools. The new law goes into effect Dec. 2.

The theory is an academic framework that probes the way policies and laws uphold systemic racism. Texas teachers and education leaders across the state have insisted repeatedly that critical race theory is not part of K-12 curriculums.

During this summer’s debates on the bill, Rep. Ron Reynolds, D-Missouri City, said the bill is blatantly attempting to censor teachers and “whitewash our history.”

Many worry about the law’s vague language.

Rep. Vikki Goodwin, D-Austin, said in August that teachers should have the latitude to be able to nurture and engage with students’ interests in what’s happening outside of school.

The DMN Education Lab deepens the coverage and conversation about urgent education issues critical to the future of North Texas.

Posted by Angela Valenzuela at 6:09 PM