Join the Librotraficante Caravan of Banned Books in #ATX Tomorrow to the Texas State Capitol—Friday, April 29, 2022

Tony Diaz, the famous “Librotraficante,” or book smuggler, has turned his sights on his very own Texas after having smuggled books to Arizona when the Tucson Unified School District dismantled the Mexican American Studies program in 2010, resulting in a court case in which I and others testified that was ultimately won in 2017. (Note: I have covered all of this amply on this blog; keyword search the following to learn more: “Mexican American Studies (MAS),” “TUSD Ethnic Studies,” “Tony Diaz,” and “Librotraficante.”)

Now in light of banned books in Texas, he and his colleagues are looking to smuggle books into different places, including Austin. Here is his Austin schedule in the event that you want to join us tomorrow as we openly challenge the attack on our history and the censorship of books in the schools.

—At 3:00 PM, March for Cultura (from Palm Park to the Capitol, along Cesar Chavez St. to Congress St., to the State Capitol Building).

He is also a reporter for Fox 26 News Houston: https://www.fox26houston.com/

Check out the wonderful piece on him below by Alejandro Serrano in the Houston Chronicle, as well. I won’t have a revolution if I can’t dance, my friends. Looking forward to good times tomorrow! 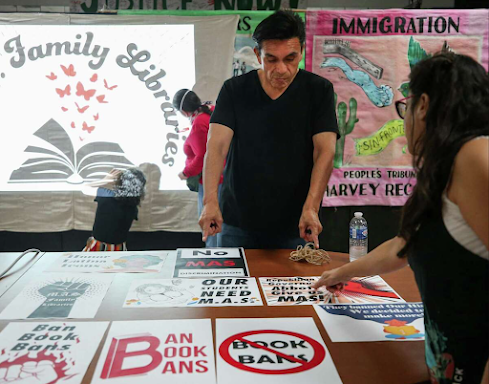 Librotraficante members Tony Diaz and Liana Lopez try to decide which sign to make into a large poster on Tuesday, April 19, 2022, in Houston. The group of activists plans to use signs and posters later this month at a rally in Austin, following a caravan from Houston, against recent efforts to ban books in the state.

A decade ago, Tony Diaz and four other Latinos organized a caravan to deliver forbidden books and history to Tucson, Ariz., where a Mexican-American studies program had been banned from schools.

The “book smugglers” return this week, spurred by the wave of book challenges and bans that has spread across the country over the last year, with some parts of Texas leading the charge.

On HoustonChronicle.com: Texas has seen a surge in requests to pull books from schools. Here are Houston's numbers so far

The Librotraficantes, which translates to book traffickers, plan to lead a pair of caravans loaded with banned books to Austin from Houston and San Antonio Friday with a similar mission to 10 years ago: spread the words others have sought to suppress.

“I am hoping that this is going to open the eyes of our community members,” said Diaz, who 24 years ago founded Nuestra Palabra, which started as a group of Latino writers and has evolved into a mission to promote Latino literature and culture. “This is not a one-shot deal. We proved that we are here for decades-long work. We’ve proven that, but now this movement is a response to the movement that is trying to silence voices.”

The caravans, organized in partnership with LULAC Texas, are in response to a spate of attempts to remove books from school libraries across Texas and the nation. In the Houston region, school districts so far mostly have avoided mass challenges that have occurred elsewhere, but still have recorded an increase in requests for book reviews. Last week, the ACLU of Texas accused Katy, Klein and San Antonio’s North East ISDs of violating students’ First Amendment rights by removing dozens of books and, in some instances, not following designated review procedures.

The American Library Association tracked the most attempts to ban books last year — 729 challenges to library, school and university materials — since it began 20 years ago compiling a list of such efforts.

COMPLAINTS: Books challenged in Houston schools are 'contrary to everything Christian', promote BLM

State Rep. Matt Krause, R-Fort Worth, chairman of the House General Investigating Committee, sent a list of some 850 books — many of which explored LGBTQ issues — to school districts, asking if the titles were on their shelves.

The moves helped spur the return of the Librotraficantes, who already were thinking of marking the 10-year anniversary of the original caravan.

“Honestly, I thought we were just going to mark the anniversary,” Diaz said. “But the book bans are back.”

Since the original caravan to Arizona, a federal judge ruled in 2017 the state had violated Mexican-American students’ constitutional rights by ending the successful ethnic studies program, writing in an opinion that the enactment and enforcement of the ban was “motivated by racial animus.”

To Diaz, a writer who switched from fiction to nonfiction around the time Arizona enacted the ban because he figured he “can’t make this stuff up anymore,” the ruling was a victory. He also believes the current attacks on history have been informed by that success, as well as the success of the 2012 caravan.

So, he and the Librotraficantes have organized again.

On HoustonChronicle.com: How did 400 Katy ISD parents get a book removed? Accusations of Marxism and 'critical race theory.'

Friday’s events are expected to start with a morning press conference in Houston before some 45 individuals board a bus to Austin, where it will meet the bus from San Antonio at Palm Park. There they will launch an underground library with about 200 donated books, to start. The group, Diaz said, will give some of the books to La Peña, a cultural organization and art gallery that will serve as their steward.

“Literally, what it means is it will be a bookshelf with those books and then the stewards decide: Do they just lend them out, do they give them away,” Diaz said. “When they run out, they need to tell us.”

In the afternoon, The Librotraficantes plan a procession of banned books on Cesar Chavez Street to Congress Avenue en route to the capitol in a “March for Cultura.”

The group also plans to honor six Latina icons — among them Dr. Angela Valenzuela, a professor at the University of Texas at Austin who had testified in a case cited by the federal judge who overturned Arizona’s law — in hopes of inspiring their recognition in Austin, Diaz said.

The whole plan came together in a matter of weeks, Diaz said, following a conversation about the 10th anniversary of the Tucson caravan.

Liana Lopez, one of the other five original organizers who goes by Librotraficante Lilo, said it felt like the effort to ban Mexican American studies that spurred the first protest was a “testing ground” for the current, wider attacks on history.

“I don’t understand what is scary about history,” Lopez said. “The only way to heal is to heal ourselves first, and we have to be able to address what’s happened in the past in a way that is not scary.”

View Graphic with hyperlinks at http://www.librotraficante.com/ 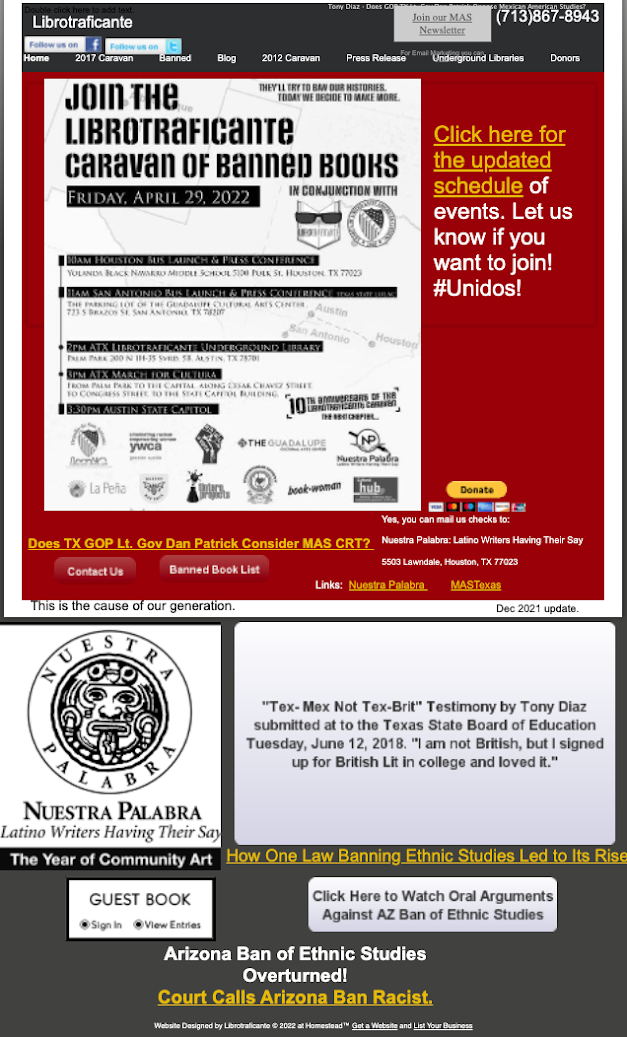 Posted by Angela Valenzuela at 5:23 PM