This decline of a request to lower U.S. flags in the wake of the Capital Gazette shootings is neither patriotic, nor sympathetic. Maybe the press actually is for Trump an "enemy of the people."  Very sad.  May we all continue defending our rights to a free press and expose wrong-doings and harmful ideologies in the full light of day.

Happy Fourth of July, my friends.  Now let's make it mean something. 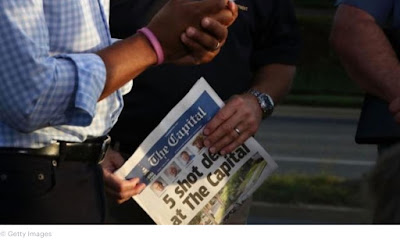 Donald Trump denied a request to lower American flags in honor of the five victims of a deadly shooting at the Capital Gazette newspaper last week, according to Annapolis Mayor Gavin Buckley, who made the request.
“Obviously, I’m disappointed, you know? … Is there a cutoff for tragedy?” Buckley told The Baltimore Sun of his request, which it said was made through Maryland's congressional delegation.
“This was an attack on the press. It was an attack on freedom of speech. It’s just as important as any other tragedy,” Buckley said.
He also said he was not lowering U.S. flags in Annapolis given the administration's decision, since he did not want doing so to "polarize people."
Flags have been lowered under Trump's order for other, larger mass shootings. Trump ordered that flags be lowered after 10 people were killed at Santa Fe High School in Texas on May 18, and after 17 people were killed at a high school in Parkland, Fla., in February.
Maryland Gov. Larry Hogan (R) has ordered that his state's flags to be lowered to half-staff through sunset Monday.
Five people were killed at the Capital Gazette on Thursday after a gunman opened fire in its newsroom. The victims were Rob Hiaasen, Gerald Fischman, Wendi Winters, John McNamara and Rebecca Smith.
Police identified the suspect in the shooting as 38-year-old Jarrod Ramos, a Maryland resident who was involved in a 2012 defamation suit with the newspaper.
Capital Gazette employees have banded together in the days since to continue producing a print newspaper. In a letter on Sunday, the staff thanked everyone who offered support. But, the letter also took a jab at Trump, saying they "won’t forget being called an enemy of the people."
“No, we won’t forget that. Because exposing evil, shining light on wrongs and fighting injustice is what we do,” the staff wrote.


Posted by Angela Valenzuela at 7:19 AM