F for Fascism. You can use the word now.

"F" for fascism.  I am appalled.  Please read this message from Senator Kamala Harris below.  Personally, the alarm here is not to discover that Trump is a fascist—since many of us knew early on—but rather that Senator Harris got openly attacked on Twitter by the “White House,” from a taxpayer-funded, White House Twitter account—@WhiteHouse

This White House action is nothing short of extreme and we should all be very concerned.

Whoever tweeted this should lose their job!  And Senator Harris is owed an apology! And the asylee community is desperate for a solution—and not twisted, hateful bigotry.

Friends, let’s be careful not to get distracted from the goal of Comprehensive Immigration Reform by pivoting to other discussions like abolishing ice.  I appreciate the passion and energy around this, but it takes us away from the most important conversation that we should be having like #FreeTheChildren #FamiliesBelongTogether 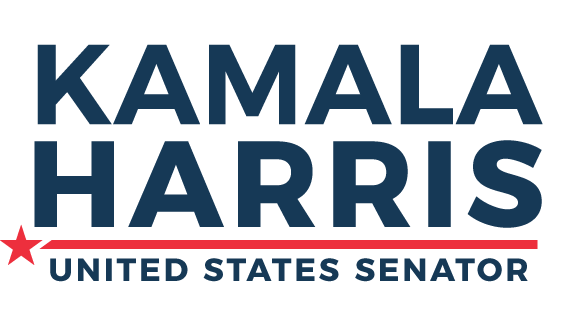 Angela —
A few moments ago, this White House used its official, taxpayer-funded Twitter account to launch a completely false attack on me: 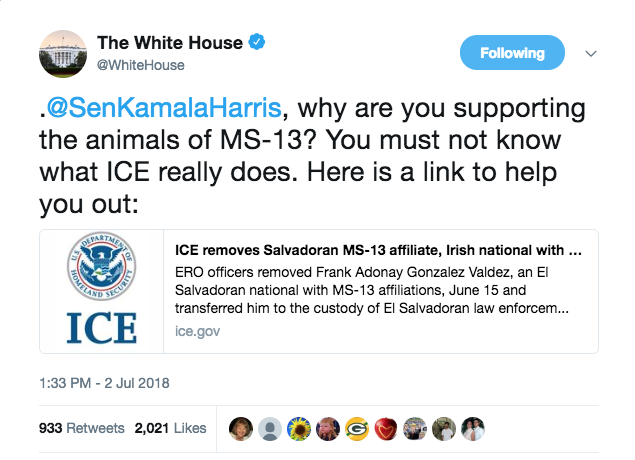 Let me be very clear: As a career prosecutor, I actually went after gangs and transnational criminal organizations. That's being a leader on public safety. What is not, is ripping babies from their mothers.I will never stop fighting to hold Trump and his Administration accountable and I will never stop speaking out against their immoral policies like separating parents from their families. Are you with me?
Chip in $10 or more right now to help us fight back — and send a message to this White House today that we’ll never stop fighting to defeat their anti-immigrant, anti-public safety agenda:If you've saved your payment information with ActBlue Express, your donation to Senator Kamala Harris will go through immediately:EXPRESS DONATE: $10EXPRESS DONATE: $25EXPRESS DONATE: $50EXPRESS DONATE: $100EXPRESS DONATE: $250OR, DONATE ANOTHER AMOUNTEvery single day feels like a race to the bottom with this Administration, and the American people deserve better. You deserve better.
When our kids and grandkids ask you where you were and what you did at this moment in time, what will your answer be? Mine will be that I did everything I could to stop this Administration’s reprehensible agenda.
Thanks for standing with me today,
—Kamala

"Freedom is never really won. You earn it and win it in every generation."- Coretta Scott King
PAID FOR BY KAMALA HARRIS FOR SENATE

There are those that argue that Trump isn't fascist, but rather that he is a right-wing populist.  Because of its implications, this is an important polemic to engage.  To this end, read Dr. Robert Reich's piece titled, "Trump: The American Fascist," as well as Madeleine Albright's authoritative new book, Fascism: A Warning, to arrive at a judgement based on the historical evidence that arguably signals creeping fascism in the U.S.  This piece by Thomas Frank is also interesting and germane.

Italian charismatic dictator, Benito Mussolini's, writings on the corporate state are also revealing.  Is it not fascist that corporations now have individual rights in the U.S.?

Join me and many others in abolishing Corporate Personhood.

Whether Trump is a right-wing populist or an American fascist , he is definitely immoral.  And it is to our own peril that we fail to acknowledge that because of this, our democracy is in crisis.

Posted by Angela Valenzuela at 9:41 PM