Fewer Births Than Deaths Among Whites in Majority of U.S. States

This New York Times article by Sabrina Tavernise reports on a report by UT San Antonio demographer, Dr. Rogelio Saenz and his colleague, Kenneth M. Johnson which shows that White deaths exceed White births in a majority of states. This is partly related to drug deaths, but reflects, as well, a declining birthrate on the heels of the Great Recession in 2008. That said, these recent results caught the Drs. Saenz and Johnson by surprise.

One can't help but speculate on how these news inform current debates over abortion and women's reproductive rights, even if subtextually, at the level of beliefs and assumptions.  Immigration and border policy, too...

The late Virgilio Elizondo comes to mind.  He once wrote, The Future is Mestizo—which has always been a question of when, rather than whether, that our nation would become mestiz@, or mixed blood.  Not that we aren't all of mixed blood already, but rather he refers to the cultural, religious, and aesthetic aspects our of identities today as he projects positively into the future on the underlying meaning of the inexorable browning of America.

All the more reason we all need to support Ethnic Studies.  Not only do Anglos have to prepare for these shifts, but all people of color, as well. 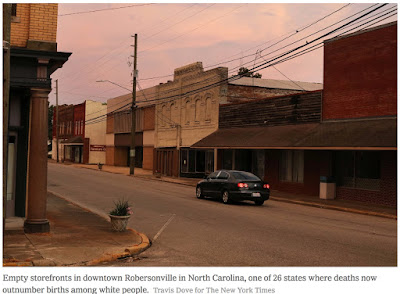 By Sabrina Tavernise | June 20, 2018, New York Times
The Census Bureau has projected that whites could drop below 50 percent of the population around 2045, a relatively slow-moving change that has been years in the making. But a new report this week found that whites are dying faster than they are being born now in 26 states, up from 17 just two years earlier, and demographers say that shift might come even sooner.
“It’s happening a lot faster than we thought,” said Rogelio Sáenz, a demographer at the University of Texas at San Antonio and a co-author of the report. It examines the period from 1999 to 2016 using data from the National Center for Health Statistics, the federal agency that tracks births and deaths. He said he was so surprised at the finding that at first he thought it was a mistake. 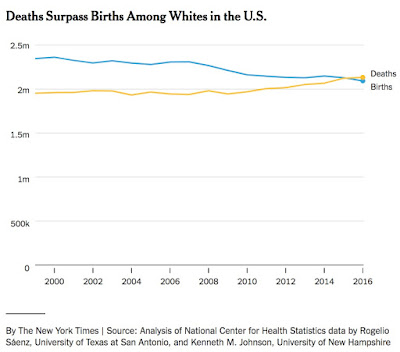 The pattern first started nearly two decades ago in a handful of states with aging white populations like Pennsylvania and West Virginia. But fertility rates dropped drastically after the Great Recession and mortality rates for whites who are not of Hispanic origin have been rising, driven partly by drug overdoses. That has put demographic change on a faster track. The list of states where white deaths outnumber births now includes North Carolina and Ohio.

The change has broad implications for identity and for the country’s political and economic life, transforming a mostly white baby boomer society into a multiethnic and racial patchwork. A majority of the youngest Americans are already nonwhite and look less like older generations than at any point in modern American history. In California, 52 percent of all children are living in homes with at least one immigrant parent, Professor Sáenz said.

Another clue that the demography is marching forward came on Thursday, when the Census Bureau released population estimates that showed, for the first time, a decline in the white population. The drop was small, just 0.02 percent, or 31,516 people in the year ending last July. But a demographer at the bureau, Molly Cromwell, said that it was real, and followed a 9,475 person drop the year before. That one was so small that it was essentially viewed as no change, she said.

What does it mean for the political map? Some experts say that rapid demographic change became a potent issue in the 2016 presidential race — and helped drive white voters to support Donald J. Trump.  Of the states where deaths now exceed births for whites, 13 voted for Mr. Trump and 13 voted for Hillary Clinton. Four are states that flipped from President Barack Obama in 2012 to Mr. Trump in 2016 — Ohio, Michigan, Pennsylvania and Florida. It is not clear how demographic change will affect politics in the future.

“People say demographics is destiny and there’ll be more people of color — all that is true,” said Jennifer Richeson, a social psychologist at Yale University. “But they also say the U.S. is going to become more progressive, and we don’t know that. We should not assume that white moderates and liberals will maintain current political allegiances, nor should we expect that the so-called nonwhite group is going to work in any kind of coalition.”


At its most basic, the change is about population, but each state experiences it differently.
Florida was the first state where white deaths outstripped births around 1993, largely because it was drawing a lot of retirees. But its population has been one of the fastest growing in the nation. Retirees have kept coming, replenishing the white population, and its large Hispanic population has helped lift the state over all. The median age for Hispanics in the United States is 29, prime for child bearing, compared with 43 for whites.
Deaths began to exceed births for whites countrywide in 2016, according to the report. But in many states, as in Florida, white people moving in made up the losses. However, in 17 states, including California, Michigan, New Jersey and Ohio, those migrants weren’t enough and the white populations declined between 2015 and 2016, said Kenneth M. Johnson, a demographer at the University of New Hampshire and the report’s other author. Five of those states registered drops in their total populations that year: Vermont, West Virginia, Pennsylvania, Mississippi and Connecticut. 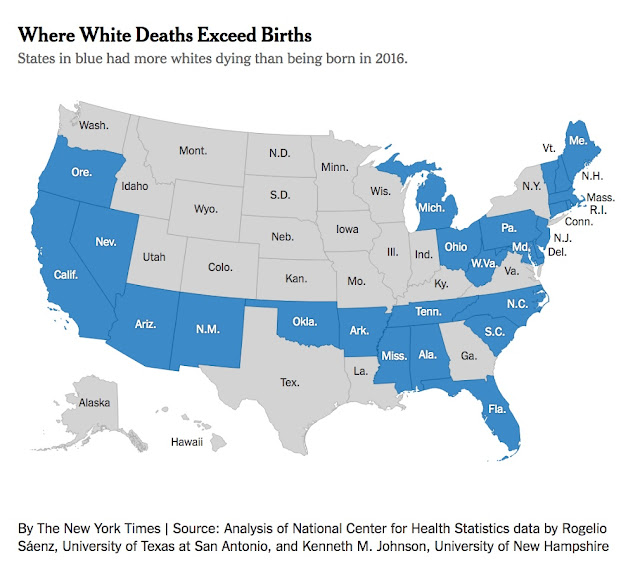 The aging of the white population began in rural counties long before it ever took hold in an entire state. Martin County, a bear-shaped patch of eastern North Carolina, first experienced it in the late 1970s. In recent years, deaths have exceed births among its black population, too. Hispanics make up less than 4 percent of the county’s population.
“There are just hardly any young people in the county anymore,” said Michael Brown, 66, a retired hospital maintenance worker in Robersonville. His two daughters went away to college and never moved back — a typical pattern for young people from the county. “We are the last generation who stayed with their parents,” said Mr. Brown. 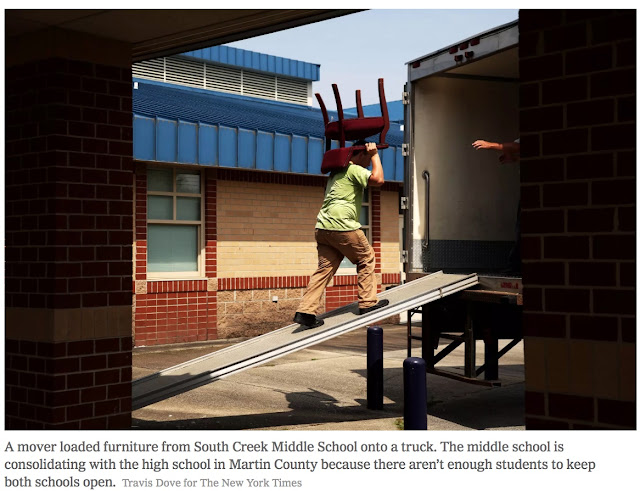 Fewer young families means fewer children. Christopher Mansfield, the county’s superintendent of schools, said the county has lost about 40 percent of its school-age population since the late 1990s. In those days, the county had 12 public schools, he said. Soon it will have eight.
The county now has what Dr. Mansfield calls “bookend” demographics, with a large population bulge over the age of 50 and another one under the age of 19. The prime working-age population is small in comparison.
Mr. Brown is practical about this change. He loved growing up in the county and is grateful he was able to care for his parents when they were ill from his house across the street. But America is changing and society is not really set up that way anymore. He and his wife plan to move to Atlanta next year to be near their daughter, a pharmacist.
Despite demographic change, whites — and in particular less educated whites — will still make up the bulk of eligible voters in the country for a while. Whites without a bachelor’s degree will make up 44 percent of eligible voters in 2020, said Ruy Teixeira, a political scientist who did a broad study of demography and politics this spring. College-educated whites will be about 23 percent. Mr. Teixeira said Republicans could continue to win presidential elections and lose the popular vote through 2036 if they did even better among whites who had not graduated from college, while other voting patterns held steady.
That is giving politicians incentives to emphasize issues, like immigration and race, where there are the biggest differences in views by education. A class divide has been growing for years among whites. In 1988, there was no difference between whites with a college degree and those without, Mr. Teixeira said. Both voted for George Bush over Michael Dukakis by a 20-point margin. By 2016, Mrs. Clinton lost noncollege whites by 31 points, double Mr. Obama’s 2012 loss, while carrying college-educated whites by seven points.
“This is a real sea change,” Mr. Teixeira said. “This is why Republicans have been able to weather these demographic changes, entirely on the backs of white noncollege voters.”

Some experts argue that the transition to a white minority might be much further off than the numbers suggest. The Census Bureau counts any person who is of mixed race or ethnicity as nonwhite, and experts say this can underestimate whites in the population. For example, the child of a white mother and Hispanic father would be counted as Hispanic, even though research shows that many such mixed children — about 11 percent of all births, according to Richard Alba, a sociologist at the City University of New York — are not unlike white children in terms of residence, family income, schooling and eventually, marriage.

“The Census Bureau is trying to apply a 20th-century conception of race and ethnicity on a situation that’s fundamentally changing,” Professor Alba said. The rapid rise of racial and ethnic mixing has led to a generation of young people whose identities are fluid, but who often “lean white,” he said. “You could think of them as kind of integrating into a kind of white mainstream.”

A version of this article appears in print on June 20, 2018, on Page A1 of the New York edition with the headline: Whites a Minority in the U.S.? The Transition Is Accelerating.

Posted by Angela Valenzuela at 4:07 PM