Anti-immigrant rhetoric: is it an echo of the 1930s?

Excellent short piece on whether the U.S. under Trump is fascist.  You decide.  Either way, it's horribly immoral and all people of good faith and conscience need to stand up to this. -Angela 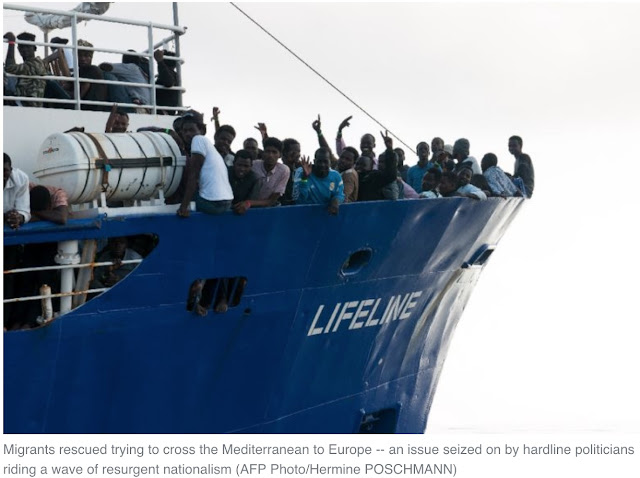 Paris (AFP) - Hardline rhetoric about immigration in Europe and the United States underlines a resurgence of nationalism and has some commentators comparing the current era to the 1930s. Is the parallel justified?
From Donald Trump to Italy's Matteo Salvini, Hungary's Viktor Orban to Belgium's Theo Francken, politicians on both sides of the Atlantic have repeatedly demonised illegal immigrants in their public statements.
Trump has warned they want to "pour into and infest our country", Orban says Africa "wants to kick down our door", while Salvini has called for a census of the Roma community which opponents see as having echoes of measures targeting Jews in the past.
Some critics say the language recalls the hateful oratory of Nazis and fascists who came to power between the two World Wars promising to protect and purge their countries.
"Trump's hardline view of immigration draws parallels to the 1930s," was the headline on a recent column from The Washington Post, while an opinion piece in The Guardian stated: "Inspired by Trump, the world could be heading back to the 1930s".
German magazine Stern recently depicted Trump on its cover giving a Nazi salute.
- 'Like a virus' -
"I think our circumstances are very different to those of the 1930s. But that's not the point," James McDougall, an associate professor of modern history at Oxford University, told AFP.
"Fascism is like a virus: it mutates in new environments and adapts to them," he said. "It's the family resemblances that tell us what it is, and they're all very obvious -- nativist nationalism, anti-Semitism, today joined by a fear and hatred of Muslims, xenophobia, anti-intellectualism, anti-cosmopolitanism."
Other characteristics include "a pretence to champion the common man against plutocracy while actually serving the interests of the wealthiest; a muscular, militarist, masculinist 'leader' image;... a demand for 'loyalty' to the 'people's will'," McDougall added.
He said the biggest worry was traditional rightwing parties of government in Europe adopting the language of far-right parties in how they depict immigrants.
"The greatest danger to democracies is a mainstream right that normalises and accommodates fascist tendencies, which is exactly what we're seeing in Britain and the US, also in Austria for example," he said.
Other historians see the parallels as being overblown.
- 'Lot less profound' -
Guy Hermet, the French author of "A History of Nations and Nationalism in Europe", said the rise in far-right parties "is not the sequel to a world war" in the same way that Nazism and fascism were after World War I.
He says he doesn't believe the nationalism on display now is comparable.
"People are scared of seeing their living conditions worsening, it is a lot less profound," he said.
French academic Sarah Al-Matary, who specialises in political language at Lyon 2 university in eastern France, said there has been a proliferation of terms used to describe migrants since 2014-2015, when hundreds of thousands began arriving in Europe.
There are two historic trends, either comparing outsiders to animals or to illnesses.
This latter tendency dates back to the 19th century when the notion of a state and its society as living organisms took root.
"Once you start considering society to be a living being, it can die and you fear outside elements, which is why you see the language of invasion and infection," she told AFP in an interview.
Posted by Angela Valenzuela at 6:52 AM