This is one of the best, most concise, analyses of late on the topic of demographic change.  In today's political climate, changing demographics that get exploited from the standpoint of a loss of white centrality among whites, encouraging the maintenance of white privilege and systemic inequalities through the disenfranchisement of the black and brown "other."

The future is inescapably mestiz@ and the world could be in a much better place, as a consequence.  Analyses like this illuminate the path forward.

An immediate takeaway is that Latinos must vote in order to have their voices heard.

Hats off to UTSA Dean of the College of Public Policy Rogelio Sáenz for this  thorough and insightful interweaving of demographics, policy, and politics. 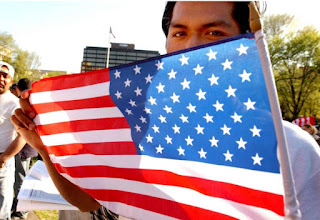 Over the last three decades, demographers have told us that there would come a day when the white population would begin to decline and subsequently become less than half of the U.S. population. The first of these expectations is now here, about a decade earlier than projected.
Mid-year population projections, prepared by the U.S. Census Bureau, indicate that there were nearly 32,000 fewer whites in the nation in 2017 than in 2016, a reduction of 0.02 percent. The white population decrease resulted from natural decline (approximately 178,000 more deaths than births), though 146,000 whites migrating from outside of the country. While the addition of multiracial individuals who identify white as one of their races creates white population gain, it is only an increase of 144,000, the smallest absolute change among single-race and multiple-race whites over the last decade.These patterns are consistent with a study that my colleague, Kenneth Johnson from the University of New Hampshire, and I, published recently. Our research shows that there are 26 states now that have more white deaths than births, including nine of the largest 15 states in the country: California, Florida, Pennsylvania, Ohio, North Carolina, Michigan, New Jersey, Arizona and Massachusetts.States where white deaths outnumber births have a higher share of their population being 65 and older, relatively low birth rates, and a shrinking portion of women capable of giving birth. Put simply, with an overall median age of 45, an aging white population produces more deaths than births.These trends suggest that by 2045, perhaps even sooner, whites will no longer be the numerical majority, quite a difference from 1940 when whites accounted for 88.3 percent of the U.S. population.The 21st century will increasingly see a growing Latino population and a declining white population. The Latino population increased by 1.2 million between 2016 and 2017, accounting for nearly 53 percent of the overall national growth during this period. As immigration from Mexico has plummeted over the last decade, Latino population growth is increasingly driven by natural increase (more births than deaths) associated with its youthfulness (median age of 29.8).Whereas there are only 0.95 children for every one elderly person among whites, there are 4.4 children for one elderly person among Latinos. As such, the relative presence of Latinos has increased. In 1980, there were 12.3 whites for every one Latino in the United States; today there are 3.4 whites to every one Latino and the ratio is projected to drop to 1.6 by 2060.This is the demographic reality of the United States. A country where whites have enjoyed political, economic, social, cultural, and demographic supremacy is changing fast. For many whites, this is uncharted territory. Many want “their” country back — the one that they knew before there were so many people of Mexican origin and other non-whites. Many whites view these individuals as threats to their way of life, culture, and the comfort and security of their white space that they long enjoyed.
It is this anxiety and fear that Donald Trump capitalized on as he initiated his presidential campaign.
“Let’s make America great again,” he proclaimed, promising to take the country back to 1940 when approximately nine of every ten Americans were white.
On the campaign trail, Trump promised white supporters that he would make America great again. Keeping people of color out of the country and deporting those already here became a major priority with Mexicans and Muslims being particular targets. His modus operandi has been travel bans against people from certain countries with large Muslim populations, massive detention and deportation of unauthorized immigrants, and now the willful and cruel separation of children from their parents fleeing violence in Central America.These efforts are meant to stir the ire, hate, and racism of his supporters against “invaders” and “criminals” who are coming to “destroy our country.” Trump also uses these endeavors to stem demographic shifts making the country less white.Trump has other tricks up his sleeve to control the political strength of people of color. These have included the short-lived Presidential Advisory Commission on Election Integrity under the leadership of Kris Kobach, set on making it more difficult for people of color to vote. And they include plans to revamp the drug wars to enhance the mass incarceration — and by association, disenfranchisement — of people of color.
Major cuts to funding for the preparation and execution of the upcoming Census 2020, which will be conducted mostly online, along with the inclusion of a question on citizenship, will undoubtedly increase the undercount of Latinos and other persons of color.Now Trump has selected a replacement to Justice Anthony Kennedy on the Supreme Court, which will tilt the Court solidly to the right and against people of color.Yet, demographic strength does not necessarily translate to political power. Look at Texas, which has the second largest Latino population in the country.With whites holding a slim 730,000 population advantage over Latinos in the state, Latinos are on track to become the numerical majority in four years. Nonetheless, Texas continues to be one of the reddest states in the country with Democrats last winning a statewide election in 1994. Despite its demographic imminence, the majority of Latinos in Texas are ineligible to vote because they are less than 18 years of age (33.1 percent) or adults who are not U.S. citizens (19.3 percent).Furthermore, Republicans have perfected political strategies to stem the political representation and voting of Latinos and African Americans. These methods include gerrymandering.

Nationwide, Texas was the clear winner in population growth between 2000 and 2010 with the state gaining four new U.S. congressional seats. Texas’ triumph was due to a growth of 3.8 million non-white persons alongside a gain of 464,000 whites. But the new congressional seats were constructed to be white Republican congressional districts.
Texas has also developed a voter ID law to make it more difficult for people of color to vote. And the Evenwel v. Abbott lawsuit that went all the way to the Supreme Court sought to change the way congressional districts are drawn, calling for the configuration of these on the basis of eligible voters rather than the total population, a method that would significantly reduce the political representation of Latinos.
Fortunately, the Supreme Court voted against Evenwel in April 2016. The demographic attributes of the Latino population, along with Republican political ploys work in conjunction to keep Texas red.
The aging white population in the U.S. is experiencing population decline largely because white deaths are outnumbering births. This demographic reality has major implications for the future of the country. Latinos, in particular, will be an increasingly important segment of the future of the country and all of its institutions including the economy, the healthcare system, universities, the military, places of worship, and the mass media.
In his misguided vision to make America great again, Trump is taking the country to the past, a route that promotes hate and racism. In the path to make America truly great, we need to take into account the new demographic reality and look to a future that fosters hope and prosperity for all.
Rogelio Sáenz is dean of the College of Public Policy and holds the Mark G. Yudof Endowed Chair at the University of Texas at San Antonio

Posted by Angela Valenzuela at 10:06 AM