I am so glad this is happening. -Angela

Dispatches from the Urban Resistance, June 2018: From Austin to Toledo and beyond. 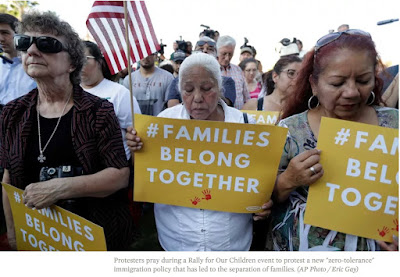 The stunning victory of 28-year-old Democratic Socialist Alexandria Ocasio-Cortez in the New York primary on June 26 pushed the call to “abolish ICE” suddenly and powerfully onto the national stage. (ICE, of course, is the acronym for the Immigration and Customs Enforcement agency.) But even before big-name politicians like Kirsten Gillibrand and Bill de Blasio began taking up the call, a growing anti-ICE rebellion had begun reverberating across city and county legislatures in response to the Trump administration’s brutalizing “zero-tolerance” immigration policy.


This article was produced in partnership with Local Progress, a network of progressive local elected officials, to highlight some of the bold efforts unfolding in cities across the country.
As The New York Times reported, the commissioners of Williamson County, a conservative Austin suburb, voted on June 26 to terminate its contract with ICE and CoreCivic, which runs a local detention facility currently housing mothers separated from their children. A few weeks earlier, Sacramento County canceled its contract with ICE, rejecting its annual $6.6 million reward for housing immigrants awaiting hearings at a local correctional facility. And both Springfield, Oregon, and Alexandria, Virginia, joined the ranks of ICE contract breakers soon after.
The continued detention of immigrants in these cities is not dependent on these contracts, and there’s little doubt that the Trump administration will find a way around cities’ dissent. But the message of these cities—which often make millions of dollars a year on contracts with ICE, sustaining jails that might otherwise close—is unmistakable.
All across the fraught fronts of immigration, labor, and voting, cities around the country showed this month that they’re willing to assume the costs of securing their residents’ rights, even as state and federal assaults mount. In the process, they reminded us, during one of the darkest months yet of Donald Trump’s presidency, that another world is still possible.
Here’s what they have been up to.

THE LABOR MOVEMENT FIGHTS ON IN SEATTLE

The Supreme Court’s decision in Janus v. AFSCME on July 27 landed a bruising blow to public-sector unions, effectively transforming the whole of the public sector into a sprawling “right-to-work” zone and likely hampering the ability of unions to secure protections and wages for millions of public-sector employees.
Yet, even as the news sent a blast wave of angst rolling through the labor movement, workers and activists in Seattle were busy laying the groundwork to extend basic labor rights to a group of long-exploited workers. These workers include nannies, house cleaners, in-home caregivers, and other domestic workers—all of them excluded from the National Labor Relations Act and other federal labor protections. And the proposed remedy is a Domestic Workers Bill of Rights that, if passed, will guarantee these workers a minimum wage, rest breaks, and other basic protections. It would also assemble a first-of-its-kind Domestic Workers Standards Board, giving workers and other community members the power to establish binding industry-wide standards—a new model of collective bargaining for a group of workers so often isolated from one another. Eight states, including New York, California, and Massachusetts, have passed similar bills since 2010.
“The work of domestic workers makes Seattle run,” says City Council member Teresa Mosqueda, who introduced the bill in committee this month. “It’s not just one company that makes Seattle great, it’s the ability of people to go to work knowing that their kids are safe.”

How much protection do sanctuary cities really afford their residents? It’s a question that immigrants and activists have been asking, particularly during the last 17 months as ICE has become increasingly aggressive in its quest to detain and deport undocumented immigrants. In New York State, for instance, where many local jurisdictions refuse to cooperate with ICE, courthouse detentions have skyrocketed, jumping 900 percent in 2017. In Philadelphia, a city that has repeatedly gone to bat against the federal government to uphold its sanctuary policies, ICE has made more arrests of immigrants without criminal convictions than anywhere else in America.
In clear-eyed recognition of the limits of existing sanctuary-city policies, the City of Austin decided this month to go a step further. The City declared itself a “Freedom City” on June 15, enacting legislation that will both discourage police officers from conducting arrests for minor offenses and require them to inform detainees that they aren’t legally required to answer questions about their immigration status.
In an interview with the Los Angeles Times before the bill’s passage, City Council member Greg Casar, who introduced the policies, said they could prevent up to 1,000 low-level arrests that overwhelmingly impact people of color. Councilmember Casar and his team found in a review of Austin police data that 75 percent of discretionary arrests for driving with an invalid license involved black and Latino residents, even though they make up less than 45 percent of the city’s population.

“Anyone arrested even for a low-level offense could potentially face indefinite detention and deportation” says Chris Harris, a campaign coordinator and data scientist for Grassroots Leadership, one of the coalition members behind the legislation. “These are overlapping systems of oppression, so limiting encounters with law enforcement can address both.”
The policy is a pointed rejection of Texas’s aggressive crackdown last year on sanctuary policies—codified in a law known as SB 4; but, more than that, it turns that policy on its head. Harris explains: “SB 4 allows police officers to say ‘show me your papers’ to anyone they detain. So now this new policy forces police to use that moment to embrace extended Miranda Rights, to also say ‘you have the right not to answer that question.’”

Two weeks after the Supreme Court upheld Ohio’s aggressive purge of its voter rolls—kicking off anyone who has skipped a single federal election cycle and failed to respond to a notice from election officials—the city of Toledo made it clear that it’s not giving up so easily on the principle of just representation for its residents.
Under newly proposed legislation, the City would expand Toledoans’ access to voting information and registration by planting representatives at the Department of Public Utilities and Toledo Municipal Court. “We need to create more points of contact where people can not only register to vote but also become educated. People just don’t know when elections are happening,” says City Council member Nick Komives, who introduced the legislation. A city like Toledo, which sits in a consistently Democratic-leaning district, is among the most vulnerable to the state’s aggressive approach to purging voters: According to a Reuters study in 2016, Ohio voters in Democratic areas were struck from the voter rolls at roughly twice the rate of those in Republican areas.
Since 2010, 23 states have passed laws making it more difficult to vote, according to the Brennan Center for Justice. Advocates of these restrictions have often cited the risk of voter fraud, but research consistently shows that the number of such cases in a given election can usually be counted on one hand. According to councilmember Komives, “We don’t have a ‘voter fraud issue,’ just like we don’t have an ‘immigration issue,’ but once those messages get out, we have to fight to pull them back in.”

A People’s Bank in NYC: A coalition of local groups gathered outside the New York Stock Exchange on June 5 to launch the Public Bank NYC Coalition. The effort aims to disinvest New York’s money from big banks and instead support “community-led initiatives,” according to Ali Issa, Coalition Organizer with New Economy Project. These initiatives “allow New Yorkers to have determination over their workplaces, housing, land-use decisions, money, food, and more.” Better yet, they are “on the rise in NYC, especially in immigrant neighborhoods and communities of color.”
Meanwhile, in Los Angeles on June 26, the City Council unanimously votedto add a measure to the November ballot that would create a city-owned bank.
Sophie KasakoveSophie Kasakove is an editorial intern at The Nation.

Posted by Angela Valenzuela at 11:22 AM