The Austin American-Statesman takes an unblinking look at AISD's pending financial crisis.  There are complexities to this worth noting.  AISD sorely needs resources from the legislature—and Texas, generally, for equitable school finance.  -Angela

OPINION
By Editorial Board 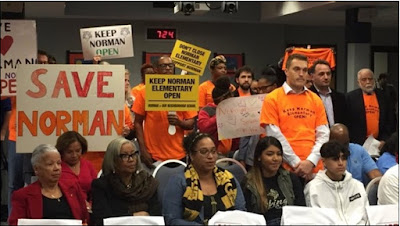 
On the surface, the Austin Independent School District careening to a fiscal crisis might seem like a real head-scratcher. After all, the district is bringing in more money than in the past because property values are rising under tax rates that remain constant. When values go up, taxpayers pay more – and the district gets more.
Add to that declining student enrollment, and the district, presumably, has fewer kids to educate with more money.
Yet, given current trends, Austin ISD will drain its fund balance in three years, the result of borrowing from its reserve fund to balance its budget – as it has done four times in six years, counting the 2018-19 school year.
But the district’s financial woes are only a head-scratcher if you discount the state’s role in financially starving Austin and other districts by refusing to adjust school financing formulas to reflect the true costs of educating kids, particularly in large urban districts. The Austin district, however, bears its share of blame in maintaining a top-heavy bureaucracy and school boundaries drawn to appease more affluent neighborhoods and parents.
RELATED: Austin school board on path to deplete district reserves in 3 years.
The Legislature is the key culprit in this crisis because it relies heavily on local property taxes — in which “recapture” is the primary tool for balancing inequities between property-rich and property-poor school districts — to finance public education. Under that system, an increasing amount of Austin’s local tax revenue subsidizes less wealthy districts.
In other words, Austin taxpayers are paying more, but their school district gets to keep less. In the upcoming school year, Austin will collect about $114 million more in local property taxes, but gets to keep $7 million less than last year. And the tab keeps growing.
As the American-Statesman’s Melissa B. Taboada reported last week, the district’s 2018-19 recapture payment — the amount it is mandated to send to the state — will total $669.6 million, an increase of $123 million, or 22.6 percent, over last year’s recapture payment. Consider that in two years, the recapture payment will eclipse the amount of money the district gets to keep for its own operating expenses.
It’s doubtful that the do-little-or-nothing Legislature regarding school finance will provide solutions when it meets in 2019. GOP leaders have little, if any, incentive to fix the system because as recapture payments rise, the state’s share of financing public education goes down.
COMMENTARY: Austin ISD prefers to see us appease parents than teach.
By dragging its feet in addressing key financial pressures on its operating budget, the Austin district compounded its fiscal woes. Those factors bring us to the district’s recent decision to look inward. While overdue, we welcome that effort.
Identifying ways to stabilize the budget requires a transparent review of the district’s administrative expenses, outside contracts with vendors, inhouse policies, grants and programs and under-enrolled schools. That review – and the recommendations it yields — should be done with an eye toward equity and shared sacrifice.
That effort started last week with a task force that will meet over the next months and make recommendations in the fall about how to right-size the district to meet its financial challenges.
To be successful, it must avoid pitfalls of the past.
Historically, such efforts have withered on the vine as trustees practiced the politics of appeasement, bowing to the interests of higher-income neighborhoods and parents at the expense of less-affluent neighborhoods and families.
The current board, too, has struggled with similar tensions that typically play out along racial lines in decisions regarding admission requirements to elite magnet schools; replacement of Confederate names on campus buildings; bilingual and dual-language programs; AP classes in lower-performing schools; bond packages that lacked equity for all parts of the district, among other things.
ALSO READ: Austin trustees approve plan to leave some schools without nurses.
For instance, if school closures due to low enrollments are limited to East Austin to save money, without meaningful discussions about boundary changes, academic overhauls or transformational approaches to fill empty seats, then the district will invoke public outrage, instead of cooperation.
As Trustee Yasmin Wagner noted, “This is a hard conversation to have.”
“With 80 percent or more of our budget tied up in staff (salaries), we really must look at other pieces and parts, operational efficiencies, how many buildings we keep open every day, and enrollment declines,” said Wagner. “There are some programs that are popular, but they don’t serve enough students. We have to look at those and others to see if we need to sunset them.”
With few exceptions, everything needs to be on the table to deal with the district’s pending insolvency, which not only would blow holes in Austin ISD’s budget, but wreck its reputation along with its stellar bond rating.
LIKE US ON FACEBOOK: Our Viewpoints page brings the latest commentaries to your news feed.
The biggest cost-drivers are the decades-old state funding formulas reflected in the so-called cost of education index that includes: costs to recruit and retain teachers in the Austin area along with salaries; expenses associated with the level of poverty in a district; and the amount the state gives districts to supplement transportation costs. Transportation subsidies should not be subject to recapture, but since they are, Austin ends up with zero in that category.
Nicole Conley Johnson, chief of Austin ISD’s business and operations, told us those formulas have not been adjusted in 30 years to reflect inflation or other higher costs Austin ISD is incurring. Therefore, the district must make up the difference from its own pocket. If the state did its job, Austin ISD would keep more of its recapture payments, reducing financial pressures on the school district’s operating budget.
Given that the Legislature is MIA on that front, the district must look at big cuts. As Wagner said, that’s a hard conversation. But, we might add, a necessary one.

Posted by Angela Valenzuela at 10:11 AM