Do read this troubling piece by Dr. Barbara Hines, a retired clinical professor of law at the School of Law at the University of Texas at Austin.  She comments on how immigrant detention is not a recent phenomenon. "Only now has this hidden gulag sprung into public vision," Hines reports, mentioning its "utter lack of transparency and incompetence."

"Absent exceptional circumstances, immigrants should be released to their families or into the community. Community-based alternatives are much cheaper and more effective than the costs of overdetention."
-Dr. Barbara Hines


Also read these helpful, earlier posts by Sonia Nazario, first in the July 11, 2018 issue of the New York Times titled, "Do You Care About the Rule of Law? Then Act Like It," and secondly in the June 22, 2018 issue titled, ""There’s a Better, Cheaper Way to Handle Immigration."

Physically detaining children and families should not even exist as a policy or practice option.  Policymakers should listen closely to alternative, humane options.

For those of us in education who might be pressed to consider the underlying ideologies and ways of knowing that allow for the existence of an "American Gulag"—that is, of course, mirrored in the "school-to-prison pipeline"—we would do well to re-discover and re-think our democracy in terms of what and how we teach.

We need to re-discover not just community, but community-based ways of knowing where a commitment to democracy equals community empowerment and public virtue.  These are the "soft skills" that not only promote survival and well-being, but also ways of knowing that are simply inconsistent and incompatible with the dehumanizing, silencing, and objectification of "the other," as we are witnessing in full display today.

Commentary: Why the separation of families is the tip of the iceberg


By Barbara Hines - Special to the American-Statesman 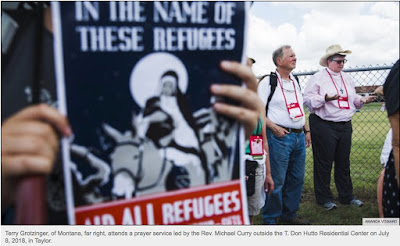 The stark images of separated children and parents in cage-like settings — and the total chaos of the vast immigration detention system — has outraged the American public. Yet, the incarceration of immigrants, including families and asylum seekers, is nothing new.
Although the immigration system is a civil system, it does not operate as such. Immigrants seeking asylum or other legal status in this country are treated as criminals but provided with less due-process protections. Currently, over 40,000 immigrants are incarcerated daily in a sprawling array of mostly for-profit private facilities.
An utter lack of transparency and incompetence have been hallmarks of detention. The disorganized reunification process of separated children is clear evidence. The focus on abducted children has highlighted problems that immigration advocates — including myself — have complained about for years. Abhorrent conditions, sexual abuse, inadequate food, lack of medical care and deaths in detention have been repeatedly documented. Although nothing in the system changes, the administration has pushed for expanded and longer detention.
Immigrants arrested in South Texas have always been held in freezing and crowded cage-like cells. Only now has this hidden gulag sprung into public vision.
Opinion: Even before family separations, Trump was cultivating hate.
In most facilities, immigrants in the so-called civil system are clothed in prison jump suits. They are transferred at will across the country from one detention center to another, even when they have legal representation. For example, separated parents were moved from Laredo, Texas, to Tacoma, Washington. Indigenous-language speakers cannot convey their legal claims or find their children. There are insufficient interpreters for this population, and phone interpretation lines are frequently broken. Attorneys must communicate with clients by leaving messages that may never be delivered. Waiting times to see clients can be up to three hours, and attorneys must share the few available visitation rooms. At the Hutto Detention Center in Taylor, where many separated mothers were incarcerated, the visitation rooms consist of see-through plastic cubicles that are not soundproof.
Despite the similarities with the prison model, immigrants are not entitled to court-appointed lawyers. This makes navigating the immigration court system nearly impossible for most immigrants.
Trump’s calls for prolonged detention for everyone should not be the model. Detention for families has traumatic consequences, as I personally know, having worked in family detention centers since 2006, when the notorious T. Don Hutto facility was run by CoreCivic, one of the largest prison companies in the country. Children and their parents were housed in jail cells in a former medium- security prison, dressed in prison uniforms, and subjected to a strict prison regime. This set-up was perfectly acceptable to CoreCivic, as it maximized its profits.
Alternatives to for-profit incarceration should not be a binary choice between the separation of parents or prolonged family detention. Under a civil system, detention should be the last alternative, not the first. An individualized assessment of flight risk and danger are the legal standards that must be applied before depriving any person of his or her liberty interest. Absent exceptional circumstances, immigrants should be released to their families or into the community. Community-based alternatives are much cheaper and more effective than the costs of overdetention.
Providing adequate funding to nonprofit organizations for universal legal representation is another cost-saving solution. Legal counsel is the primary controlling factor in appearance rates in immigration court. Ninety-seven percent of families with lawyers attend their court hearings. Immigrants who are represented by attorneys have a much higher chance of success in their cases than those forced to navigate the system on their own.
Having caught a glimpse of the inhumanity of the immigrant detention system, the American public should take a fresh look at overincarceration and urge the adoption of community-based alternatives and legal representation to allow adults and children to pursue their cases. We can do better — much better.
Hines is a retired clinical professor of law at the University of Texas School of Law.

Posted by Angela Valenzuela at 3:20 PM