The world needs to know about this abuse.  It's all such a horrible, atrocious violation of children who are already victimized.  The second story has more detail. The source for this story is Propublica.

‘If you’re a predator, it’s a gold mine’: Inside the abusive immigrant youth shelters

According to logs obtained by ProPublica, some immigrant youth shelters are a hotbed of sexual abuse. 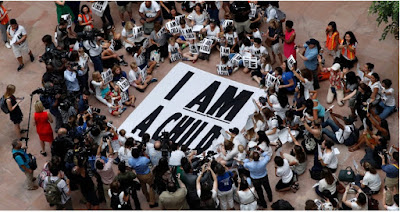 This story was originally published by ProPublicahttps://www.propublica.org/.
Just five days after he reached the United States, the 15-year-old Honduran boy awoke in his Tucson, Arizona, immigrant shelter one morning in 2015 to find a youth care worker in his room, tickling his chest and stomach.
When he asked the man, who was 46, what he was doing, the man left. But he returned two more times, rubbing the teen’s penis through his clothing and then trying to reach under his boxers. “I know what you want, I can give you anything you need,” said the worker, who was later convicted of molestation.
In 2017, a 17-year-old from Honduras was recovering from surgery at the shelter when he woke up to find a male staff member standing by his bed. “You have it very big,” the man said, referring to the teen’s penis. Days later, that same employee brushed the teen with his hand while he was playing video games. When the staff member approached him again, the boy locked himself in a bathroom.
And in January of this year, a security guard at the shelter found notes in a minor’s jacket that suggested an inappropriate relationship with a staff member.
Pulled from police reports, incidents like these at Southwest Key’s Tucson shelter provide a snapshot of what has largely been kept from the public as well as members of Congress—a view, uncolored by politics, of troubling incidents inside the facilities housing immigrant children.
Using state public records laws, ProPublica has obtained police reports and call logs concerning more than 70 of the approximately 100 immigrant youth shelters run by the U.S. Health and Human Services department’s Office of Refugee Resettlement. While not a comprehensive assessment of the conditions at these shelters, the records challenge the Trump administration’s assertion that the shelters are safe havens for children. The reports document hundreds of allegations of sexual offenses, fights and missing children.

Continue reading here.
Posted by Angela Valenzuela at 8:46 AM