Seven years ago, a rally at the Department of Education promoted one of then-President George W. Bush's most significant domestic achievements -- the No Child Left Behind law. The backdrop: a red schoolhouse. 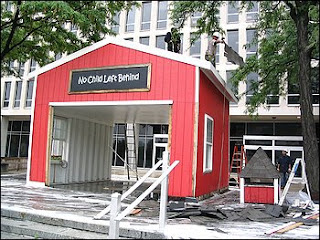 "We serve the ideal of the little red schoolhouse," then-Education Secretary Rod Paige said of the structure attached to the agency's main entrance on Maryland Avenue SW. "It is one of the greatest symbols of America -- a symbol that every child must be taught and every child must learn."

But now that symbol has been ripped down.

The Obama administration has made clear that it is putting its own stamp on education reform. That will mean a new name and image for a law that has grown unpopular with many teachers and suburban parents, even though it was enacted with bipartisan support in Congress.

"It's like the new Coke. This is a rebranding effort," said Joe Williams, executive director of Democrats for Education Reform. "The feng shui people believe you need to take the roof off buildings to allow bad chi to escape. Let's hope this helps."

The 2002 law dramatically expanded the federal role in public schools. It mandates math and reading testing for millions of students and penalizes schools with too many youngsters who fail those exams.

During his run for office, President Obama said he wanted to change the law to do more to help schools, "rather than punishing them." Education Secretary Arne Duncan has called the law's name "toxic."

Toxic or not, is No Child Left Behind headed for extinction?

Lawmakers have yet to tackle an overhaul, and Duncan has not offered specifics on how he would like to see the law revamped. But the administration has said it will not back down from testing students or holding schools accountable.

Duncan has said he wants even higher standards that measure U.S. students against peers worldwide. But he said states and schools should have more flexibility in achieving goals.

"Other than kind of the aesthetics of it, it's not clear the schoolhouse represents anything more substantial," Hess said.

No Child logos on the Education Department elevators are being stripped. Official correspondence to states now refers to the law's original name, the Elementary and Secondary Education Act of 1965.

On Saturday in a steady rain, construction workers pulled down the schoolhouse and its No Child Left Behind sign. Instead, photos of students, from preschool to college age, are going up on 44 ground-floor windows, forming an exhibit that can be seen from outside. There are images of young people reading, attending science class and playing basketball.

In a note to his staff yesterday, Duncan said the photos should "serve as a daily reminder that our mission is about helping kids."

Matthew Yale, deputy chief of staff for Duncan, said the department is considering a contest to rename the law.

Education blogger Andrew Rotherham, a former member of the Virginia Board of Education, posed the same question a few months ago. He got a slew of answers.

Some were sincere: "Successful Schools for a Strong America Act."

Some less so: "Don't task, don't fail act"; "No nutty education reform idea left behind"; and "Caitlin. Everybody seems to be naming things Caitlin these days."
Posted by Dr. Patricia D. López at 11:40 PM