The Costs of "Postponing" Ethnic Studies in Texas by Lydia French

Here is an update on the status of Ethnic Studies in Texas by Dr. Lydia French.  You can link to her blog here.

The Costs of "Postponing" Ethnic Studies in Texas

In my last post, I included some actions people could take to encourage members of the State Board of Education to vote to approve a Mexican American Studies course and curriculum for the elementary and secondary levels in Texas. In April 2014, the board compromised by passing a proclamation, Proclamation 2016, that would support the development of ethnic studies topics courses in social studies as well as the development of textbooks and materials for African American, Native American, Asian American, and Mexican American studies courses.

This week, the board has pulled a fast one by voting in favor of an amendment proposed by member Thomas Ratliffe to "postpone" development of those materials, a major blow and what many among those who organized in support of enriching education in Tejas saw as sabotage of the original proclamation and vote. As mi colega, Tony "El Librotraficante" Diaz has phrased it, the State Board is "pulling the rug" out from under Texas students. And many are comparing the acts of the board to the ethnocentrism at work in Arizona in its banning of ethnic studies in 2011. 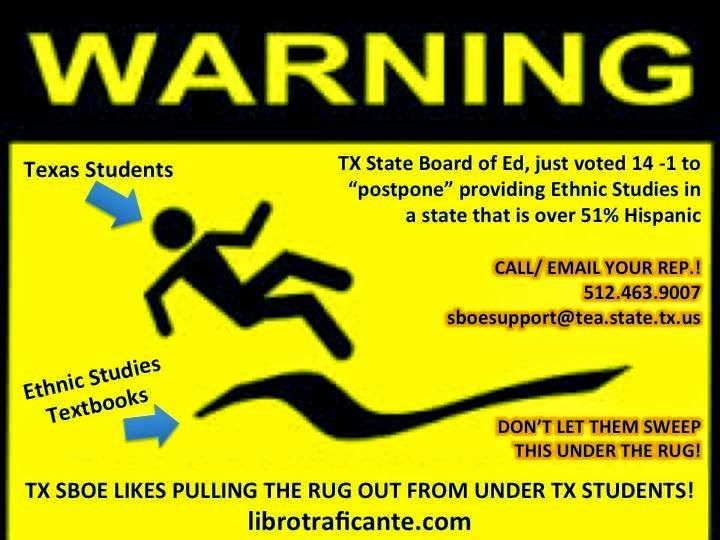 Indeed, for me personally it's hard to divorce this decision from racially-tinged ideological motives at work in the state. But I'm also an impassioned Chicana advocate of Chican@ studies, with ethnically- and racially-tinged ideological motives of my own. Pues, a veces la verdad duele.  So, I started to ask the question: what are the actual costs to Texas and Texans of failing to provide a culturally relevant elementary and secondary education to our students? I found many answers in a 2008 Workforce Report from Texas Comptroller, Susan Combs.

After a careful analysis of, by now well-known, demographic trends in Texas, the report analyzes the impact of the absence of culturally relevant education for young Texans, especially Latin@s and African Americans, who tend to drop out of high school at higher rates. The report finds:

. . . The Texas Higher Education Coordinating Board reported that Hispanics and blacks accounted for about 54 percent of the population aged 15 to 34 in Texas in 2007, but on 39 percent of the state's higher education students in Fall 2007. One way to increase overall educational attainment in Texas is to raise participation among Hispanic and black students in postsecondary education, in both two-year and four-year institutions.  ("Demographic Change and Education" 13)

Indeed, these findings motivated the Closing the Gaps and Achieving the Dream initiatives in the THECB, but the 2008 workforce report goes on to remind readers that programs in higher education can only go so far when those students needed to close achievement gaps and become skilled members of the Texas workforce aren't even graduating from high school. Although the report predicts that "[i]f the State Data Center's 'high-growth' scenario plays out," which it has continued to do at an even faster pace than predicted, "Hispanics will make up 58.7 percent of the state work force in 2040, more than twice their share in 2000" (14). Thus,


Because this portion of the state's population is growing rapidly, a larger percentage of the Texas workforce -- 30.1 percent -- will have no high school diploma by 2040, compared to 18.8 percent in 2000, if current trends continue. The State Data Center also expects the percentage of high school graduates in Texas to fall slightly, from 29 percent in 2000 to 28.7 percent by 2040. (14)

And here's the kicker, the part the SBOE should really be paying attention to, the part that needs more attention and media coverage by Texans, regardless of ideological motivation:

And if policy in Texas limits high school educational options, it could exacerbate these trends, causing more students to lose interest and drop out of school. (14, emphasis mine)


As we know, policy in Texas, with its emphasis on high-stakes testing, reducing funding for schools while enlarging budgets for publishing compaines and test-making factories, and diluting the cultural relevance of the curriculum, has continued to limit high school options. But again, what are the stakes of these policy/political moves? To understand that, we have to recognize that all policy implications have a human face and human desires. Thus, the report continues,


While students drop out for many different reasons, a recent survey for the Bill and Melinda Gates Foundation found that nearly half of dropouts surveyed (47 percent) said a major reason for dropping out was that classes were not interesting. (15, emphasis mine)

Educators in Mexican American Studies know this first-hand because we hear time and again in our classes that students never knew of the contributions of our people to American history, to Tejas history, to the arts, to the medical professions, to the rich history of entrepreneurs in this country. Once they see their lives reflected in our classes, they become not just interested but invested. Why would the school board want to delay such an important investment, which is not just a human investment but an economic one? Once again, the 2008 Workforce report clarifies the impact that an impoverished education will have on the future of Texas:


Unless Texas increases the average educational attainment levels of its non-Anglo populations, our future labor force will be less educated than today's. This means that workers will earn less and have fewer skills, and business will find it increasingly difficult to hire and retain qualified applicants. If the Texas economy is to continue to thrive, this downward spiral of decreasing educational levels, a less educated work force and fewer skilled job seekers must be reversed. (15-16)

Those of you who access the report and read it more fully will clearly see that the calls in this report are for the strengthening of workforce and career training programs, which may make it appear as though I'm cherry-picking data. Quite the contrary. Although I am one of those acknowledged in the report as an advocate for academic programs in higher education in order to sustain the civil society that undergirds and parallels the political economy, what the report demonstrates through this data is that it really doesn't matter whether students seek a workforce or academic route in post-secondary education if they're not even receiving an enriching and culturally relevant elementary and secondary education.

The question that the Texas electorate needs to be asking of SBOE members and policymakers at large is: why wouldn't we want to implement--and even fast-track--a culturally-relevant curriculum for Texas students?

As frequently happens in political decisions motivated by ideology and ethnocentrism, cost was identified as the biggest factor in the decision to postpone the approved ethnic studies materials. But we should all be asking ourselves and our legislators, what are the bigger costs, not just to students but to all tax-paying and voting Texans, of continuing to impoverish our students' education?
Posted by Lydia A. French at 11:07 AM
Posted by Angela Valenzuela at 10:25 AM