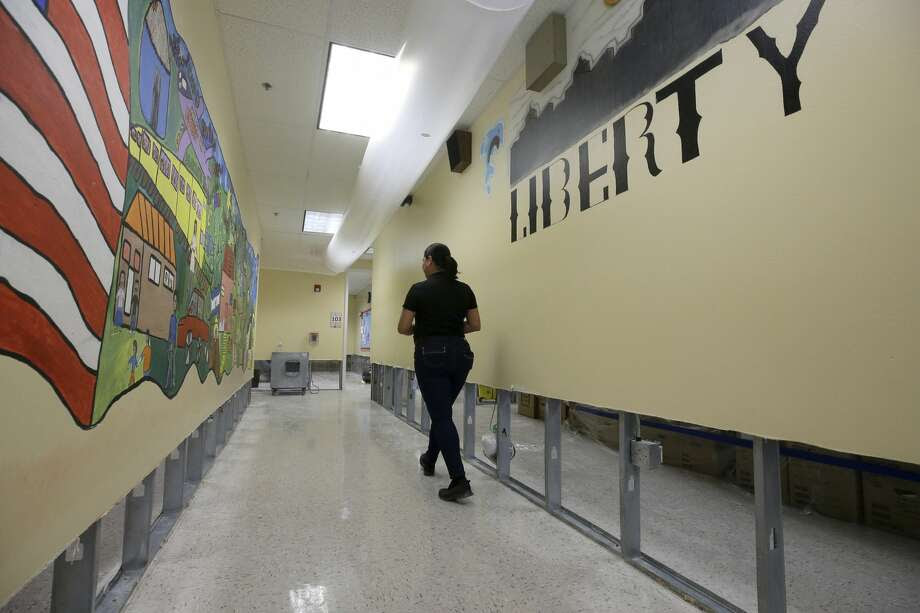 Mary Pinales, with Blackmon Mooring, walks through Liberty High School, 6400 Southwest Fwy., where the walls were cut two feet up to dry out the school Thursday, Aug. 31, 2017, in Houston. Many schools were damaged from flooding in the aftermath of Hurrican Harvey. ( Melissa Phillip / Houston Chronicle)
Leaders of school districts heavily affected by Hurricane Harvey told a legislative panel on Monday that they would like to see Texas' accountability and testing requirements relaxed in the wake of the disaster. They also said the storms have dealt a financial blow and that they weren't optimistic about being reimbursed by the Federal Emergency Management Agency or insurance anytime soon.
The superintendents gathered for a special meeting of the Senate Education Committee at the University of Houston. The senators are considering what recommendations to make to the state for K-12 hurricane recovery efforts and how the state should provide funding to school districts that lost students and buildings after the storm.
Since Harvey, local school officials said, they've shouldered almost all of the costs of running shelters, reopening schools and accommodating students who were left homeless. And they don't anticipate much help from FEMA or their insurers.

Hurricane Harvey impacted 275 school districts in Texas.
Media: Fox7
To offset costs associated with the storm, Houston ISD Superintendent Richard Carranza said, the district has had to spend nearly $78 million of its emergency cash. Most other speakers said their districts had dipped into reserves, too.
"In our minds we're not even looking at FEMA to help us," said Mark Porterie, superintendent of the Port Arthur ISD, just outside Beaumont. "We've given up on that."
Officials from the Dickinson and Galveston school districts said they were still fighting with FEMA and insurance adjusters over millions of dollars to cover expenses arising from Hurricane Ike, which made landfall in 2008.
Galveston ISD Trustee Anthony Brown said that even though his district was eligible for about $17 million after Ike, FEMA has refused to pay all but about $5.5 million.
"We're still going through audits, we're still going through appeals, we're still going through this circle," Brown said. "We've had generations of auditors on this."
Although the state's accountability system and standardized testing was not on the agenda, it was repeatedly brought up by superintendents and education leaders who testified.
Before the superintendents testified, Texas Education Commissioner Mike Morath said his agency had polled Harvey-affected school districts and found that by a nearly 2-to-1 margin, school districts preferred to keep the current testing windows the same rather than move them later.
That stunned Port Aransas ISD Superintendent Mark Kemp, who helped reopen the district to students in mid-October.
"I'm on all the conference calls and meetings with our local superintendents, and we keep saying the same thing - just give us a one-year reprieve," Kemp said. "The stress of testing is huge, and on top of that, we have students who have to find their next meal, who have nowhere to lay their head at night."
Other superintendents who testified Monday said they'd rather have the state hold them harmless for their students' results than change the testing window. None spoke in favor of leaving the state's testing and accountability system in place, as is, for storm-affected districts this year.
Katy ISD Superintendent Lance Hindt said his district's accountability data has been out of whack since the late-August storm. At Mayde Creek High School, for example, Hindt said they've seen a 14 percentage-point drop in the number of students who submitted free or reduced-price lunch applications. He said that's because the district offered free meals through September, so many students who qualify didn't end up submitting applications on time.
He proposed the state give every campus and district within the federal government's disaster area an accountability ranking of "not rated – data integrity issues." Hindt said that's a designation that already exists and can be used under current law, and that it reflects the situation in Katy ISD and other Harvey-affected districts.
"Why hold districts accountable based on flawed data?" Hindt asked. "The state does not care that parents lost jobs or are living on the second story of their home. If you don't think that will have impact on accountability, let me come back a year from now and show you how it did."
The stakes of testing are high for urban districts such as the Houston and Dallas school districts.
State intervention is a possibility in both districts because they have schools receiving four or more consecutive "improvement required" ratings for low academic achievement. If any school receives a fifth straight "improvement required" rating at the end of this school year, a new state law mandates the Texas Education Agency must close the campus or take over the district's school board. Houston ISD has 10 campuses that must improve this year to avoid state intervention, the most in Texas. It's followed by San Antonio ISD (six), Waco ISD (five) and Dallas ISD (four).
Sen. Larry Taylor, chairman of the education committee, said he was trying to weigh the need to recognize what students in some of the most devastated districts have gone through with the need to make sure teachers and schools are held accountable for helping students grow.
"It's a difficult thing. There is some balance we have to reach because it can't be 'Everyone, we get a year'" without accountability or testing, Taylor said. "Some teachers and districts would take advantage and say."Oh, we don't need to do anything.'"
Posted by Angela Valenzuela at 10:43 PM