Statement in Favor of Family Unification and in Support of a Fair Immigration Policy on this National Day of Protest Against Jailing Immigrant Children June 30, 2018 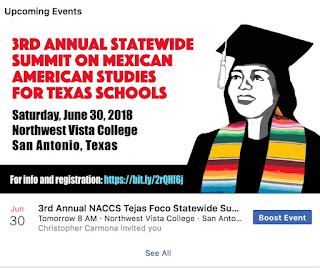 Friends,
I am happy to share our collective statement as Mexican American Studies scholars.  It was read on the morning of June 30, 2018 at our Statewide Summit held in San Antonio, Texas, at Northwest Vista College.
As an educator, I value teaching students in a humanitarian way that means disrupting the kinds of attitudes and dispositions that make keeping defenseless, already victimized children and parents in prisons, acceptable policy.
Read on.
Angela Valenzuela
#FreeTheChildren #FamiliesBelongTogether

We are the Tejas Foco (Chapter) of the National Association for Chicana and Chicano Studies (NACCS Tejas), the leading professional organization in Mexican American Studies that is affiliated with the longest running organization of its kind in the country. We are meeting today in San Antonio at our 3rd Annual Statewide Summit on Mexican American Studies for Texas Schools 2018 to advance the education of our children in Texas. We cannot begin to address our educational concerns, however, without first condemning the detention of minors, separation from their families, and the proposed indefinite detention of families by the United States government.
The United States is largely responsible for the current Central American refugee crisis through its security, trade, and military policies, along with its drug consumption. The resulting political instability and economic distress that has sent refugees towards the United States in search of a better life and future for their children, is American-made. Therefore, we have a responsibility to help these families and children.
President Donald J. Trump’s nativist political rhetoric and those who support such rhetoric seek to dehumanize refugees to justify policies that violate basic human rights. Most recently, the president advocated the elimination of due process for immigrants, which is one of the most important legal protections and civil rights for citizens and non-citizens alike. Such nativist rhetoric erodes our basic humanity and violates basic principles and values in our nation’s promise of life, liberty, and the pursuit of happiness for all human beings regardless of citizenship status.
NACCS Tejas calls on the president to immediately cease the current “zero tolerance” prosecution policy at the border, and to release detained families, with their children, within 20 days of apprehension to allow their asylum and immigration claims to work through the courts. We also ask for fair immigration reform by the United States Congress that would allow DACA recipients and DACA-eligible persons to legalize their status, and provide immigrant families fair and efficient methods to become citizens.
We understand that this is not the first time that the U.S. has violated the human and civil rights of international migrants on the border. Ever since the U.S.’s war of aggression in 1846-1848, the United States has lorded, militarily and culturally, over the border with Mexico and unilaterally defined its draconian immigration policies and practices. In the process, U.S. employers have exploited Mexican, Central American and Mexican American workers as a low-wage labor supply without much regard for their fair admission and integration into American society on an equal basis.
The United States has received working families from the south as exploitable workers who have been welcomed during periods of need, and rejected during economic downturns or nativist campaigns for exclusion. U.S. hypocrisy has reached new heights when the United States government uses children to deter immigration and satisfy the alt-right mendacity of a U.S. president, while retaining the right to use Mexico and Mexicans in the United States for its national and racial interests. Shame on everyone, including federal contractors like Southwest Key and the Border Patrol staff (the majority of whom are Mexican Americans and other Latinos), for collaborating in this Faustian pact.

Posted by Angela Valenzuela at 8:19 PM