White fragility is a serious, systemic, and deeply historic condition that Robin Di Angelo courageously calls out.  It's so deep that this message is best heard from a white person herself.  White people need to understand "whiteness" as a social construction in every way that the concept of race is a social construct that goes back to the invasion and ensuing colonization of this continent.  As opposed to others whose identities have a geographic association, there is no such thing for whites—or for any other "color" (black, brown, yellow, red, etc.).

White person or white-identified person: Can you hear the word, "invasion?"  After all, that is what it was no matter how it gets omitted from, or distorted in, our children's public school history textbooks.  The genocide of native people—and with the use of this word—also has to be acknowledged even if our country has yet to own up to this.  On whose land are we on? There is never an instance in which we are not on native land.

It's certainly progress, but terribly shameful that it was less than two months ago that the Texas State Board of Education voted on changes to the state's curriculum requiring the teaching of slavery as the primary rationale for the Civil War.  Previously, the grand narrative was soft-pedaled with the order running from sectionalism to state's rights, and then finally, to slavery when it actually runs in the opposite direction—from slavery to sectionalism and state's rights.

This revised, factual curriculum is barely going into effect next fall in 2019 which means that we've not only been systematically mis-educating our youth on this for forever and a day (or giving mostly-white, teachers permission to do so), but also appeasing white fragility, guilt, and narrative power to the point that few, if any, whites on the SBOE ever took it upon themselves to champion this cause.

Praise to Marisa B. Perez and the democrats on the board for spearheading this change (why should they even have had to have been "democrats?")  , and thanks to our families, communities, and universities for keeping the truth of slavery and white privilege alive, but shame on us as a polity for ever letting this get this far.

All told, white fragility should not be reduced to an emotional state that comes and goes, but is rather a standpoint that holds enormous consequences in so many arenas of private and public life, including, if not especially, state curriculum which is of massive importance given its purported intention to educate the masses on a truthful basis.

Teaching the truth of history is admittedly always more ideal than real because of the contested nature of knowledge.  However, silencing our history on invasion, slavery, conquest, genocide, and colonization and their enduring, far-reaching effects is so big an oversight as to not at all be unintentional.

Hence, the importance of white fragility.  Read on. 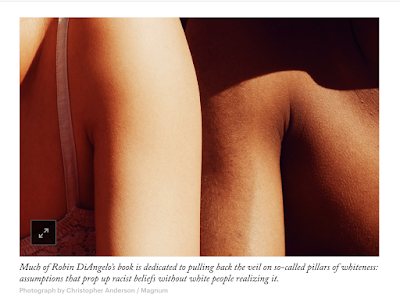 
In more than twenty years of running diversity-training and cultural-competency workshops for American companies, the academic and educator Robin DiAngelo has noticed that white people are sensationally, histrionically bad at discussing racism. Like waves on sand, their reactions form predictable patterns: they will insist that they “were taught to treat everyone the same,” that they are “color-blind,” that they “don’t care if you are pink, purple, or polka-dotted.” They will point to friends and family members of color, a history of civil-rights activism, or a more “salient” issue, such as class or gender. They will shout and bluster. They will cry. In 2011, DiAngelo coined the term “white fragility” to describe the disbelieving defensiveness that white people exhibit when their ideas about race and racism are challenged—and particularly when they feel implicated in white supremacy. Why, she wondered, did her feedback prompt such resistance, as if the mention of racism were more offensive than the fact or practice of it?

In a new book, “White Fragility,” DiAngelo attempts to explicate the phenomenon of white people’s paper-thin skin. She argues that our largely segregated society is set up to insulate whites from racial discomfort, so that they fall to pieces at the first application of stress—such as, for instance, when someone suggests that “flesh-toned” may not be an appropriate name for a beige crayon. Unused to unpleasantness (more than unused to it—racial hierarchies tell white people that they are entitled to peace and deference), they lack the “racial stamina” to engage in difficult conversations. This leads them to respond to “racial triggers”—the show “Dear White People,” the term “wypipo”—with “emotions such as anger, fear and guilt,” DiAngelo writes, “and behaviors such as argumentation, silence, and withdrawal from the stress-inducing situation.”

DiAngelo, who is white, emphasizes that the stances that make up white fragility are not merely irrational. (Or even comical, though some of her anecdotes—participants in a voluntary anti-racism workshop dissolving with umbrage at any talk of racism—simmer with perverse humor. “I have found that the only way to give feedback without triggering white fragility is not to give it at all,” she remarks wryly.) These splutterings “work,” DiAngelo explains, “to reinstate white equilibrium as they repel the challenge, return our racial comfort, and maintain our dominance within the racial hierarchy.” She finds that the social costs for a black person in awakening the sleeping dragon of white fragility often prove so high that many black people don’t risk pointing out discrimination when they see it. And the expectation of “white solidarity”—white people will forbear from correcting each other’s racial missteps, to preserve the peace—makes genuine allyship elusive. White fragility holds racism in place.

DiAngelo addresses her book mostly to white people, and she reserves her harshest criticism for white liberals like herself (and like me), whom she sees as refusing to acknowledge their own participation in racist systems. “I believe,” she writes, “that white progressives cause the most daily damage to people of color.” Not only do these people fail to see their complicity, but they take a self-serving approach to ongoing anti-racism efforts: “To the degree that white progressives think we have arrived, we will put our energy into making sure that others see us as having arrived.” Even the racial beliefs and responses that feel authentic or well-intentioned have likely been programmed by white supremacy, to perpetuate white supremacy. Whites profit off of an American political and economic system that showers advantages on racial “winners” and oppresses racial “losers.” Yet, DiAngelo writes, white people cling to the notion of racial innocence, a form of weaponized denial that positions black people as the “havers” of race and the guardians of racial knowledge. Whiteness, on the other hand, scans as invisible, default, a form of racelessness. “Color blindness,” the argument that race shouldn’t matter, prevents us from grappling with how it does.

Much of “White Fragility” is dedicated to pulling back the veil on these so-called pillars of whiteness: assumptions that prop up racist beliefs without our realizing it. Such ideologies include individualism, or the distinctly white-American dream that one writes one’s own destiny, and objectivity, the confidence that one can free oneself entirely from bias. As a sociologist trained in mapping group patterns, DiAngelo can’t help but regard both precepts as naïve (at best) and arrogant (at worst). To be perceived as an individual, to not be associated with anything negative because of your skin color, she notes, is a privilege largely afforded to white people; although most school shooters, domestic terrorists, and rapists in the United States are white, it is rare to see a white man on the street reduced to a stereotype.

Likewise, people of color often endure having their views attributed to their racial identities; the luxury of impartiality is denied them. (In outlining these discrepancies, DiAngelo draws heavily on the words of black writers and scholars—Ta-Nehisi Coates, Toni Morrison, Ijeoma Oluo, Cheryl Harris—although, perhaps surprisingly, she incorporates few present-day interviews with people of color.)

In DiAngelo’s almost epidemiological vision of white racism, our minds and bodies play host to a pathogen that seeks to replicate itself, sickening us in the process. Like a mutating virus, racism shape-shifts in order to stay alive; when its explicit expression becomes taboo, it hides in coded language. Nor does prejudice disappear when people decide that they will no longer tolerate it. It just looks for ways to avoid detection. “The most effective adaptation of racism over time,” DiAngelo claims, “is the idea that racism is conscious bias held by mean people.” This “good/bad binary,” positing a world of evil racists and compassionate non-racists, is itself a racist construct, eliding systemic injustice and imbuing racism with such shattering moral meaning that white people, especially progressives, cannot bear to face their collusion in it. (Pause on that, white reader. You may have subconsciously developed your strong negative feelings about racism in order to escape having to help dismantle it.) As an ethical thinker, DiAngelo belongs to the utilitarian school, which places less importance on attitudes than on the ways in which attitudes cause harm. Unpacking the fantasy of black men as dangerous and violent, she does not simply fact-check it; she shows the myth’s usefulness to white people—to obscure the historical brutality against African-Americans, and to justify continued abuse.

DiAngelo sometimes adopts a soothing, conciliatory tone toward white readers, as if she were appeasing a child on the verge of a tantrum. “If your definition of a racist is someone who holds conscious dislike of people because of race, then I agree that it is offensive for me to suggest that you are racist when I don’t know you,” she writes. “I also agree that if this is your definition of racism, and you are against racism, then you are not racist. Now breathe. I am not using this definition of racism, and I am not saying that you are immoral. If you can remain open as I lay out my argument, it should soon begin to make sense.” One has the grim hunch that such an approach has been honed over years of placating red-faced white people, workshop participants leaping at any excuse to discount their instructor. DiAngelo, for all the outrageousness she documents, never comes across as anything other than preternaturally calm, patient, and lucid, issuing prescriptions for a better world as if from beneath a blanket of Ativan. Her almost motorized equipoise clarifies the book’s stakes: she cannot afford to lose us, who are so easily lost.

Self-righteousness becomes a seductive complement to “White Fragility,” as gin is to a mystery novel. (“I would never,” I thought, when DiAngelo described the conversation in which her friend dismissed a predominantly black neighborhood as “bad,” unsafe.) Yet the point of the book is that each white person believes herself the exception, one of very few souls magically exempt from a lifetime of racist conditioning. DiAngelo sets aside a whole chapter for the self-indulgent tears of white women, so distraught at the country’s legacy of racist terrorism that they force people of color to drink from the firehose of their feelings about it.

The book is more diagnostic than solutions-oriented, and the guidelines it offers toward the end—listen, don’t center yourself, get educated, think about your responses and what role they play—won’t shock any nervous systems. The value in “White Fragility” lies in its methodical, irrefutable exposure of racism in thought and action, and its call for humility and vigilance. Combatting one’s inner voices of racial prejudice, sneaky and, at times, irresistibly persuasive, is a life’s work. For all the paranoid American theories of being “red-pilled,” of awakening into a many-tentacled liberal/feminist/Jewish conspiracy, the most corrosive force, the ectoplasm infusing itself invisibly through media and culture and politics, is white supremacy.

That’s from a white progressive perspective, of course. The conspiracy of racism is hardly invisible to people of color, many of whom, I suspect, could have written this book in their sleep.

Katy Waldman is a staff writer at The New Yorker

Posted by Angela Valenzuela at 12:59 PM